Should I make the /home on a separate partition?

Since my issue here, I decided to reinstall EndeavourOS.

But I hesitate to make the /home on a separate partition, but I’m scared that I would have storage problems, like one having free space, while the /home being full.
Now, I know that you can change partition sizes, and BRTFS can do it online (when the system’s running), but I don’t want to mess with partitions, unless I really need to.

So I’m asking you, how I could do it, maybe found something else, or solve the other issue.
Thanks in advance!

From my point of view the separate partition for /home is a must have.

So you can install/reinstall system(s)/distros without backup/move/remove/recopy your personal datas.

I am affraid no one can answer that for you.
For me it would boil down to 2 things - not enough room on the partition vs. messing with content in /home when I want to only reinstall /.

You can always create something like /storage in / partition and symlink it from /home for “more convinient” access.

Pick what is the best for you. For me storage is cheap so buying bigger drive is also an option and then moving /home to separate partition is no issue.

It is entirely a matter of personal preference.

I never create a separate /home. It is just one more thing I need to manage.

A matter of taste. I always make a separate home partition.
In this machine root btrfs and home is ext4.

I don’t make a separate home partition.
My personal data resides on another partition and backuped on external drives.
Also I keep backups of my dot files and dot folders.
Whenever there will arise a need for a reinstall, I start off with a clean slate and restore my data as needed.

Judging by the answers, I think I’ll go with a separate /home partition.

Do note it’s on an external SSD, if that makes a difference. It’s an Samsung PSSD T7 500GB.
The layout will look like this;
128GB exFAT partition (so that I can exchange some files with Windows)
72GB for the system
And the rest (300GB) for /home

Last question, should I do it with LVM or not?
I’ve heard of LVM, but don’t quite know what it does, but if I make everything BTRFS (except the exFAT partition), I could resize the partitions while the system’s running?

Btrfs provides the ability to create subvolumes within a filesystem. Subvolmes don’t usually need to be resized. They simply share the same space. Creating multiple btrfs filesystems on the same device isn’t that useful IMO.

If you are going to use btrfs, I would recommend a single partition with separate subvolumes for home and /. However, this is again a matter of personal preference.

I’ll look into that option later when I’ll have time, the documentation seems pretty big about it.
Thanks for the idea!

My preference is one partition per physical drive (with the exception of the EFI partition, of course). I use the ext4 filesystem, because of its simplicity, speed and reliability.

On computers where I have multiple physical drives, I keep the home directory on the same drive as the root, and that is always the fastest drive I have. This is because there is significant benefit of keeping some directories, like .config and .cache on a fast drive. Where speed isn’t critical, like for documents, downloads, pictures, music, videos and other similar files files, I keep them on a slower drive, and I put symlinks to these directories in my home directory.

I use a swap file, which I also put on the fastest drive I have.

My preference is one partition per physical drive (with the exception of the EFI partition, of course). I use the ext4 filesystem, because of its simplicity, speed and reliability.

P.S. I hate that EFI crap that forces me to use FAT

finesse. Something you learn with plenty of experience

Same for me, yes I have backups of /home and separate OS and data disks, but in reality I arranged my workflow to be independent of the platform.

So, to op: you can have a separate partition for /home IF that is your cup of tea. You can also choose to rearrange your system approach to be unfazed whatever happens, Or you can choose to have redundant backups of everything every 10 seconds.
It all boils down to personal preferences, as someone else already abundantly pointed out

Having a separate /home partition makes reinstalls a breeze

Having a separate /home partition makes reinstalls a breeze

It also means that you carry most of your problems from the old install into the new.

Most of my problems are in the system, not the user. I haven’t jumped back on the nvidia drivers since things got eff’d on the last installation. Kind of want to see what happens in 6.2 before I go back to nvidia drivers.

If you have driver problems, you don’t need to reinstall.

I keep the home directory on the same drive as the root, and that is always the fastest drive I have. This is because there is significant benefit of keeping some directories, like .config and .cache on a fast drive. Where speed isn’t critical, like for documents, downloads, pictures, music, videos and other similar files files, I keep them on a slower drive, and I put symlinks to these directories in my home directory.

I feel the same way as @Kresimir. The home partition contains the configuration files of the programs and should therefore be on the fastest disk. Since my data HDD is very slow (6TB, 5400rpm), I have linked its folders to /home. The dotfiles are backed up to backup media and copied back to /home after a reinstall. So /home can be flattened at any time without losing data. 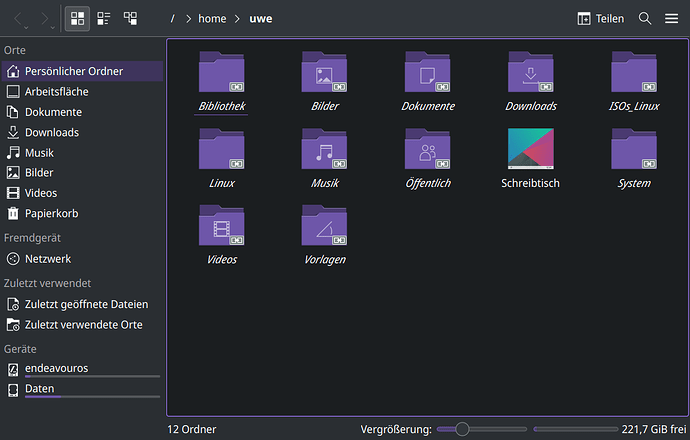 Yeah, that’s exactly how I do it. Simple to setup, works great.

At least until there are affordable SSDs in the corresponding size and the HDDs can finally be thrown in the garbage can.

Apparently I did, trying to back out nvidia drivers. Something in the configs wasn’t right and got tired of trying to figure out what I missed. Plus the migration from grub didn’t work, didn’t want to spend all day figuring out that. I can reinstall in 1/2 hour and mount /home and done. I have a script that installs all the software I use.