The new update to Gnome-Shell (gnome-shell 1:3.36.5-1) leads to unexpected behaviour of installed extensions - be careful!!
In my case the activity overview won’t work anymore.

Once again we will have to wait for fixes I guess…

This was one of the main reasons why I said goodbye to gnome. Each update breaks extensions.

Yes, but GNOME is sleek, stable (in itself) and beautiful

So I always come back to this love-hate. (I’ve a second Partition with XFCE4 as DE

GNOME is sleek, stable (in itself) and beautiful

…and difficult to customise. I do like GTK, so my environment, based on sway, may remind of gnome to some degree. Take a look.

…and difficult to customise. I do like GTK, so my environment, based on sway, may remind of gnome to some degree. Take a look .

GNOME isn’t made for customizing purposes!!

Joking aside - I love your desktop, and I’ve tried different WM’s in order to get rid of all these restrictions the DE’s come with. BUT there is really a lot of configuration required.

GNOME isn’t made for customizing purposes!!

Very true. That’s why it’s not for me.

there is really a lot of configuration required.

Well, at the moment all the stuff I wrote is either published in AUR, or backed up on GitHub, so I can reproduce my install in reasonable time. But yes, it was prepared by a tinkerer for tinkerers.

to illustrate what I mean by sleek 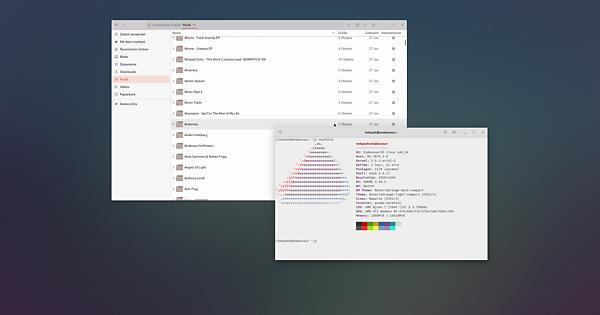 Looks good. Possible to make quite easily on Openbox.

Possible to make quite easily on Openbox

Yes, [https://www.reddit.com/r/unixporn/new/] is full of examples.
You mean, I must not give up and try again with awesome e.g.??

I must not give up and try again with awesome e.g.

I know nothing about awesome. Among floating WMs my favourite is Openbox, which can also look perfectly well with the tint2 panel. As I prefer tiling, my primary environment is sway (but i3 does the job as well). You have a variety of WMs to choose from.

Where do you guys get all this fud from I use a customized Gnome DE their is so much that can be done by the user.

I think 6 months for a extension between updates is a good deal for the user, Unlike KDE, Cinnamon, with a million plasmoids, widgets, etc not sorted into version numbers that only a couple are working.
As for customizing well Cinnamon looks like windows what ever you do with it.
XFCE is customizable,
Budgie no way,
Deepin is broken by design, Mate well Gnome 2 long out of date,
So we are left with KDE, aka win 95 again its the most limited as no matter what you do it looks like KDE aka win95.
If you really want to customise install JWM and write your own themes any way you want.

- there’s space enough for another partition…

Back to the original topic, the extension dash to panel also broke with this update. If you want to run the current version, for the time being you can use dash to dock, this extension isn’t affected and works as it should be.

Not really necessary. Most WMs may be installed alongside GNOME, and easily removed if you don’t like them.

hello, I don’t take the extensions of the gnome site, so less problem to update.

This was one of the main reasons why I said goodbye to gnome. Each update breaks extensions.

What I know may be out of date, but the GNOME developers seemed not to care about extensions. They tolerate them.

I have always viewed or felt it to be that the extensions in Gnome are not part of the underling system so much as they are a “patch” to get around the lock-down the developers have on the taskbar. Basically, they are more of a “hack.”

Yes they are part of the system I’m sorry they are user orientated, they are not supported by Gnome just like plasmoids and stuff are not supported its called user integration, a bit like the AUR, gnome provides the site, provides the tools, the user makes the extensions, so the users are giving back to the project.
The users that do the complaining are not users, They are just the i must have brigade that have brought their bad habits from windows to Linux take and complain.