Are there Linux users around you?

I have trouble getting people to use uBlock Origin, gave up on converting these fools to Linux.

I have confused eyes looking at me if people see a non Google Chrome or Safari browser or a non Google search engine. I once had this conversation:

Someone: What browser is this?
Me: Firefox
Someone: Wait, isn’t Firefox dead?
Me: What are you talking about?

I know that Firefox had near %50 market share before Chrome took it all but dead?
I also had a recommendation of not using “obscure” search engines like DDG or Ecosia.

I have confused eyes looking at me if people see a non Google Chrome or Safari browser or a non Google search engine.

I believe all this is because Windows, Google Chrome, … etc. are “bundled” with every machine on the market.

So, by definition Windows is not competitive!

When you travel, reach a hotel at night, you find them welcoming you with a lousy pizza in your room.

Most people will just eat it and fine with them as compared to just going down then across the street to the best restaurant in the city.

If computers were sold bare bone, users might then search, research and decide!

It sometimes feels weird to be a Linux user for only 1 year and missing out all the history.
If you are saying SUSE I guess this was 2000s.

This answer requires some explanation. While there are users of Linux around me, they’re all fellow sysadmins, and old school Linux heads, with distain for any sort of GUI, even an nCurses one. They still write SysV style init scrips, I have no idea what they’re going to do when that gets fully deprecated in RHEL.

No one around me uses Linux as a desktop, they just can’t handle the concept that it’s “not Windows.” Though a few used ChromeOS for a while.

That explains everything. I wouldn’t be surprised if they are Gentoo users for 20 years, give or take.

Oh they’re vehemently anti-Linux-desktop actually. Linux is for servers and Windows is for desktops and that’s the way it is (we’ll see how they feel when they see all the telemetry in Windows 11).

Yes! This was my first Linux experience and I’m on Linux (at home) since then. (excluding a couple of years I was stuck at work)…
I saw those laptops selling around 2004 or 2005.

It sometimes feels weird to be a Linux user for only 1 year and missing out all the history.

Don’t worry. The most important thing is that you already did it!
And “ONE YEAR” means you already freed yourself from M$ 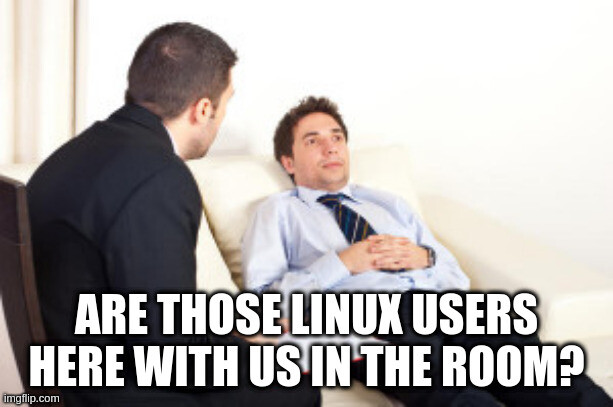 anti-Linux-desktop actually. Linux is for servers and Windows is for desktops

Again, “human nature”, I am sure many use iPhone, iPad, MacBook… They know it is the operating system of Apple, but they don’t know or ignore that Apple OSes are based on BSD which is sort of UNIX as Linux (a cousin may I call BSD?), and it is not Windows and not Apple specific OS.

Honestly when I had (before retirement) a lot of work, time sensitive I used to take my Linux laptop to office and get the job done rather than keeping fixing/restarting Windoze!

I wonder why is he worried about Linux users being with him in the room!
It is not Linux users who… aaaah… he is worried of catching a virus!

No, there aren’t any.

Oh my company won’t let Linux machines on the desktop network…then again they won’t let any machine on that doesn’t have a cert from their own internal CA, that’s how big corporate rolls. But yeah, don’t try to tell them their Android phones run Linux.

And don’t get me going on Linux vs UNIX vs BSD and all the lawsuits involved in how they call themselves. It’s a deep, deep rabbit hole as I’m sure you know.

I think it is important to consider the individuals mindset as it relates to why they use a computing device.

I think a substantial portion of the world view their device as a tool. A thing that gets them what need access to or gets done what they need done.

They have no desire to invest any more time in learning about it than is required to achieve their goal.

The truth of the matter is, for those users, Linux would be fairly annoying:

Ultimately, if you have things you just want to do, Linux is an obstacle.

That is why, finding someone to convert to Linux is partially about finding someone willing to overcome that obstacle. They need motivation. Which as many people have pointed out can be positive or negative. “I want to learn Linux”, “I need an OS that will run on my aging hardware”, “I am sick of Apple/Microsoft”, etc, etc.

Of course, as someone else rightly pointed out above, if you literally only use your device as a way to access your web browser, all will be fine since the majority of web browsers are available for Linux.

I know this will anger the open source crowd but in my opinion the #1 thing that would increase adoption of the Linux desktop is if Microsoft Office was easily and fully available. No, the web version doesn’t count.

don’t try to tell them their Android phones run Linux

Oooops… you got me here…

And don’t get me going on Linux vs UNIX vs BSD and all the lawsuits involved in how they call themselves. It’s a deep, deep rabbit hole as I’m sure you know.

Sure not! I am not into politics!
For me all what you mentioned I consider great OSes… they are OS who want to MAKE something that really works, this is the main target as compared to “another” who just care to MAKE money.
The only “politics” I would talk about is how come I pay money to “BUY” a CD or download an OS, but I don’t really own it. I can install it on one machine only. If it is crushed and bought a new bare bone machine I don’t have the right to reinstall it.

“I want to learn Linux”, “I need an OS that will run on my aging hardware”

These two were the main reasons why I started using linux, mainly the latter.
The motivation part is really important.

For me it was Windows 10 is PAIN on a spinning drive and the idea of an OS with unrestricted freedom enlightened me.
I remember booting Mint ISO and getting shocked each time I did something and it worked. I thought Linux was a self contained basic OS for learning and not for daily driving, therefore I had very low expectations.

forgot this one too:

Last year, I talked to one of the student, who was my former classmate and currently is in CS course. We were talking everything about our studies, then he showed me his laptop which was running Ubuntu at that time. I was able know that the OS is ubuntu, because before switching to Linux this year, I had studied many articles about various OSes based on Linux, BSD.
I asked him about his usage experience. He told he is getting his work done, and had no issues. Then, I asked him would you recommend this to me

He told that I cannot use Linux as OS on my system. He then provided many points to me which he thought will deny my switch to Linux. I agreed with him there.

Many people here, who are using Linux, always say to common people that Linux is not for home usage, hence they should not use Linux. This creates a false image of free OSes, and hence they are not so popular here around. Though, if you ask people about Linux, they will say either Ubuntu or Linux Mint.

In my case, I didn’t made dual with Windows, in order to have a safer side, rather I completely replaced my partition with EndeavourOS !
Now I am waiting to meet him and say that I also Linux OS, which do not include software downloader, not includes many GUIs, etc. And still, I am able to completely use this without much troubles

PS : When I switched to EndeavourOS, I had never heard of this in past, and obtained its name in some random article. The name caught my attention as it has 50% of letters of my name, and hence I installed this on my system at that time !

If there are Linux users around me, I don’t know about them. Although in the past, a person from one of the service providers visited me and was amazed at how much I know about Linux, because he is still a beginner in this field. I was a little surprised about this. He also uses an Arch-based distribution, just like me. It’s true that he’s running Manjaro, while I’m running EndeavourOS. He also asked me a few things, and I was happy to answer him.

I live in sri lanka and the first time i was introduced to linux is my dad had ubuntu installed on his machine (it was back when i was a kid). Right now i know some school mates who use linux for hacking purposes. And surprisingly enough i saw a government officer (A tax related office) using ubuntu on his machine.

The only Linux users around me have Android phones and I moved my Mom over to ChromeOS about 8 years ago. AFAIK I’m the only desktop Linux user I personally know. This includes even people using VMs and containers. TBF I only know a handful of MacOS users personally. Everyone is all on Windows.