I updated my Deepin 20 today with the latest kernel and nvidia software. Installed it all from terminal. After the installation I was given the notice to reboot my system because of the new kernel software installed. Upon rebooting I get the message : Failed to boot/vmlinuz-linux not found. error. . .need to load kernel first. What is going on? The software I downloaded all installed and upon my re-boot the kernel can’t be found to boot the system up?

Help please this is frustrating.

Theme is always the same, hope it helps

Failed to boot/vmlinuz-linux not found. error. . .need to load kernel first. What is going on?

Well actually…It might not be Deepin this time, i don’t know

P.S. Sorry, when i see Deepin i’m quickly hip to the gun

Thanks for the help. . . .guess I’ll stop using Deepin for a few months until they or someone gets all the bugs out. . .this is frustrating. . . . I kinda liked it because of the simplicity. . but now I’m having doubts until it all gets fixed and worked out. Thanks once again for the response.

Well, to be fair, although all those things definitely holds - i’m not sure that this particular issue you have is Deepin related…

Just had no experience with boot/vmlinuz-linux not found before, maybe somebody more experienced will come here

Not more experienced but I think I have come across similar issue somewhere.

You could try to chroot into your system from your live usb and rebuild the initramfs. Use this wiki to chroot: https://endeavouros.com/docs/system-rescue/rescue-non-booting-system-with-arch-chroot/. When you are in chroot, run this command: mkinitcpio -P after it finishes type exit to exit from chroot. Now reboot your system.

Hope this will take care of this issue. 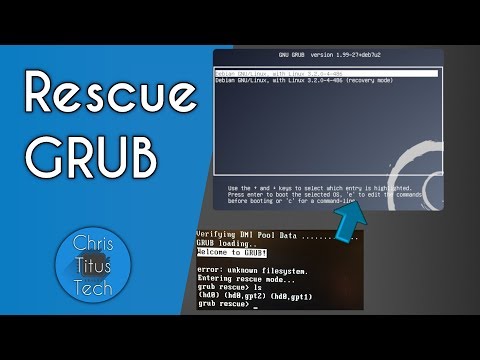 In our previous articles, we mentioned how you can rescue GRUB with EFI and Bios. Over here we show you with a video by Chris Titus Tech how to rescue Grub with one method using GRUB rescue and the…

Well actually…It might not be Deepin this time, i don’t know

P.S. Sorry, when i see Deepin i’m quickly hip to the gun

You of all people should know by now, its deepin

Unless your willing to waste your time and report bugs, I’d leave deepin well alone, its Beta Software and has been for quite a while.

I know its hard to let go, it was for me, no point fighting with it

I moved to KDE I was not keen at first but at least its reliable.

Try Cinnamon! I absolutely love cinnamon and it works/looks beautiful with the endeavour wallpaper.

its Beta Software and has been for quite a while

Not really. Beta software is when something is feature complete, tested and ready for broader testing.

I don’t think deepin really meets that criteria at the moment.

I was trying to be polite

It shouldn’t even be in the arch repos, maybe under testing at least.