This guy kind of triggered me

I really don’t think he even tried to research Endeavour before putting it on the list. He just blabbering about what Endeavour is not offering. Doesn’t even know BSPWM comes in as a CE, not as an online edition.

The guy seems to have very little idea of what he is babbling about. All DEs are thematized …

It’s obvious that he hasn’t really looked into it.

Who cares what some random youtuber think…

Yep, I think he has Enos at 2 because it’s on distrowatch list in the 2nd place, and hoping to get some views. He clearly doesn’t know what he’s saying about.

I think I’m going to start doing youtube LInux videos. It’ll be me and a glass of tequila and I’m just going to slam distros and Linux reviewers.

You know what’s great about this distro? You don’t have to f* * ing use it. Flash that s * *t right to your worst USB and hurl it right into the bin and go out with your friends to the bar and get another beer.

All DEs are thematized …

Are they?
I thought you would get only vanilla DE:s when doing the online install.

Vidar probably were quoting the YouTuber who said something similar

Actually, he has Enos at 4 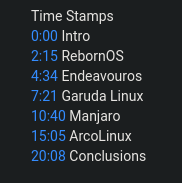 Installation can be kind of slow. . . Use the offline install, it’s faster. . . They use the Plasma style launcher (he doesn’t know what whisker is?!?). ALL desktops are unapolgetically themed. . . . You can’t install other applications. . .

I don’t think this guy has ever used, read about, tried, or even really heard of Endeavour. . . I haven’t heard so much worthless information spouted in a short time since my last breakup.

spouted in a short time since my last breakup.

Yeah lost me when he pronounced gui as gooey. This is why the term asshat exists.

I think I’m going to start doing youtube LInux videos. It’ll be me and a glass of tequila and I’m just going to slam distros and Linux reviewers.

Sorta like The Critical Drinker, except you’ll do Linux instead of media?

I’d watch that all day.

I can get wasted and be judgemental about ANYTHING. Linux is just a great starting point. With this guy right here who apparently thinks he can judge Endeavour. . . or any other Linux distro after providing proof he knows as much about it as my dog. Just a moment ago I showed my dog my laptop and all he did was lick the keyboard. He thinks it’s a treat. . . so, ya.

Next time you show your dog your laptop, have a word processor open and see what gets typed. It could be a profound message from Dogland!

Edit: Or it could be “Speaking in tongues”

It’s nice that eos was included but these reviews would have benefitted much more from some background research on the distros. More work needed before posting videos.

I think he just wanted to say Arco is the best and he loves it. But without doing that he just made a list so it would be unbiased or something. But it just made him look like

I also thought about that. I tried arco, there are lots of package options to choose from at install. However prefer the simplicity to get a vanilla working system and build from there.