The state of Linux

The Year of the Linux dissatisfaction

I poured over and thought about posting this, thinking forward about the discussions that will (de) generate.
However, I am an adept of learning from own mistakes and challenging myself to get better.
I would like to see that the Linux community leaving behind the tribalism and unwillingness to accept some hard truths.
My distro is better than yours is childish and immature already as it is.
Also, what’s the point of learning something about Linux and realize that it applies to some distros, but not to others. It’s hurting the Linux as a whole.
It is an unpopular opinion, but time is a precious resource. Some are NOT willing to spend time to learn new things, it’s a reality.
So, there you are, your opinion.
But please, keep it civil, let’s discuss in relaxed, academic way.

At this point, to me, Linux is nothing more than something to get by on while waiting for the Hurd.

Just quoting part of the article. To me it looks like it is not linux it is him.

Ignoring reviews for the moment, all of the above makes it very hard for me to adopt Linux in my production setup. I want to. Linux was my dearest hobby for a long time. I changed my career - going from working as a physicist in the medical industry to doing high-performance computing and such - because Linux. I had such high hopes, such high expectations for the Linux desktop, and they never realized.

I need Windows for gaming. Linux gaming is still a fraction of what you get for Windows, the compatibility layers are just a bittersweet dream, the performance is not as good, even on the same hardware, plus you have all the other issues I outlined earlier.

**No you need a distribution that is not lagging 2 years behind reality.** **unless you are trying to play games that are drm but then again if so why are you using linux?**

I need Windows for office suite work. I need to send my books to publishers. None of them care about ODT. Whatever software rocks your boat, there’s no native Microsoft Office support for Linux at the moment. It might change one day, but that day is not this day.

I'll have to look around. ODT can't be the only reason.

I need consistency and super-long support - I cannot allow things to randomly break. While Microsoft, with its Windows 10 rings euphoria and fast-fast-fast gimmicks, is persistently chipping away at the once legendary reputation of robustness and stability its updates used to be, Windows is still far more predictable than Linux in the home environment.

This is just silly. Windows updates break things way more often than linux. Then again he says he has only used ubuntu derivatives which are super stable not sure what he is getting at here 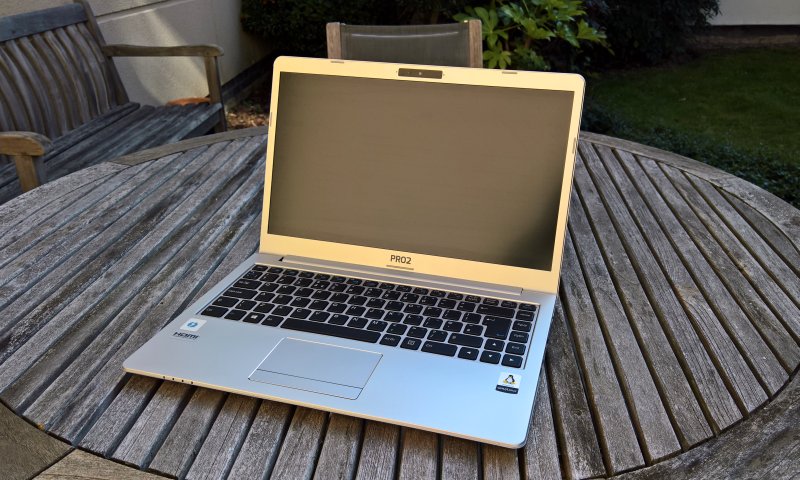 ** You may also be interested to know which distros I used in my (home) production setup *** over the years:

*** I did try to introduce CentOS into this setup, alas this effort has always required the use of non-official third-party software sources, which I find unacceptable in my production setup. To that end, even though I like CentOS a fair deal, I’ve never added it into this lot.

Distros don’t matter. At the end of the day, it’s just linux.

It’s usually the people who are dissatisfied with Linux, not Linux itself, that is the problem.

This is a good article to counterbalance the view from the article in the OP:

Linux is NOT Windows

That said, I do look forward to the Year of the Hurd when Linux will finally be obsolete. Good riddance!

OpenBSD is yet another intermediate step towards Parnassus. Sure, I’ll use it if Linux goes south, but I’m not particularly looking forward to it…

Hurd is not around yet

Some of the saddest words ever spoken and written…

I need Windows for gaming.

That always seems to me like a very subjective point. If you mainly play multiplayer games, you could run into trouble on Linux. But the rest usually works without any problems on Linux, even newer AAA games like Death Stranding or HZD.

And your point is? 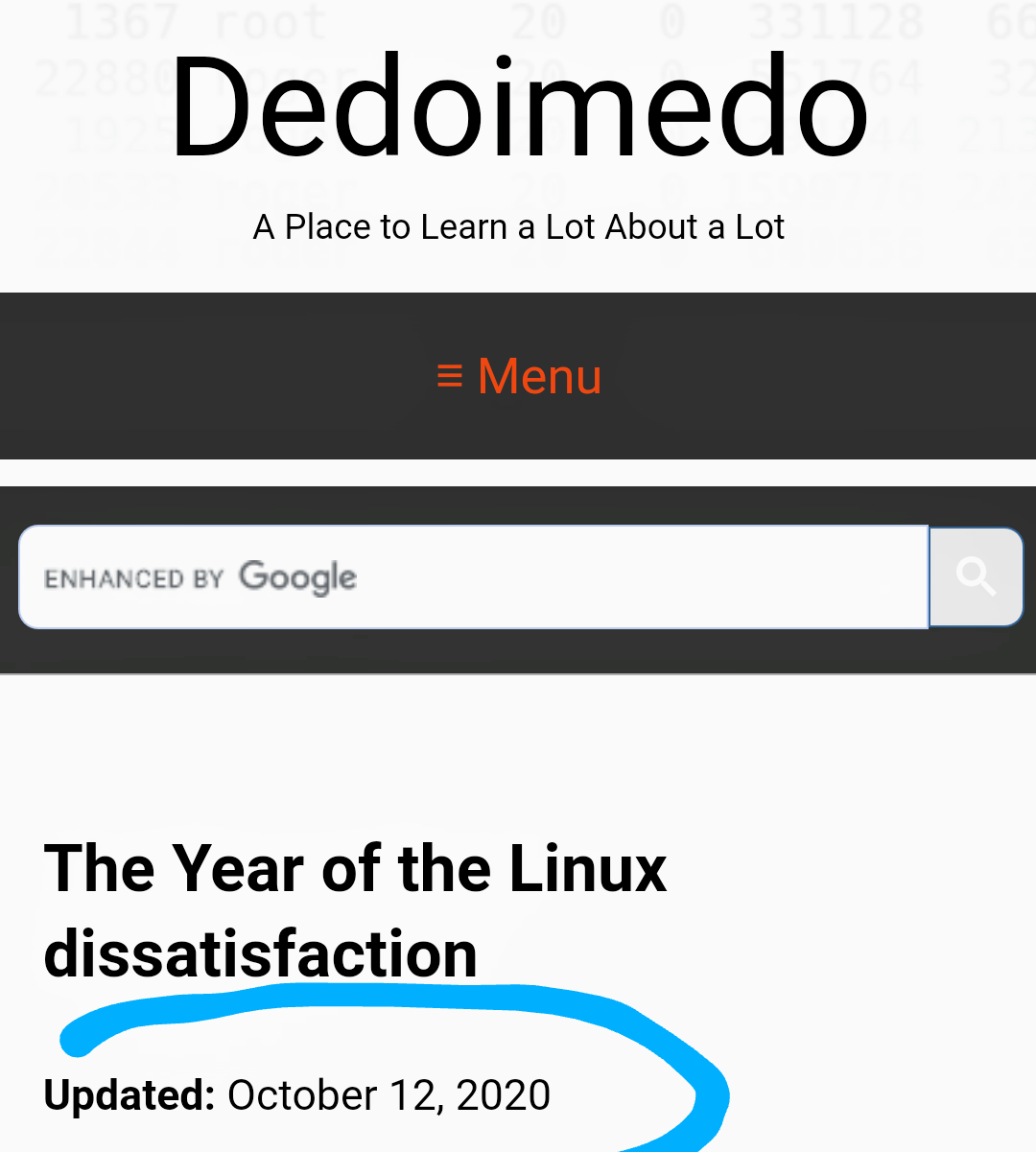 Just quoting part of the article. To me it looks like it is not linux it is him.

I often get that impression from the posts on the site so I’ve given up on anything more than a cursory glance every now and then. Still feels a little like I’m feeding the trolls when I do, though.

What some see as fragmentation because of “too many distros and too many desktops,” others of us see as an almost infinite number of choices.

“Then, from around 2015 onwards, nothing happened really.”

In terms of kernel development and hardware support yes it has! It’s huge as far as I’m concerned. Desktops have also evolved not all but many!

Very few really saw what Dedoimedo tried to show.
It’s a hurdle and a struggle to make a point to people who just won’t listen.
I am a Linux user, but I try hard to see trough my preferences and get out of my comfort zone and listen impartiality to different points of view.
Always we can learn to do something different, and many times even better.
Tell me, we, as a community we discuss how "ignorant"are other not willing to learn and use Linux.
But hear me…I worked in corporate environment, in government agencies and I am working in private corporate environment.
To them, we are almost negligible. Linux is worthy as long as it provides a very consistent, easy to document, working powerforce - think servers.
As distros, we are pointed out and see as geeks and rarities…

Imagine for a second a country where each state, town and city have the very specific driving rules and specific driving rules for each version of the established law, and of course, not compatible with anterior legislation.
How many accidents will occur because of this?
Why can’t I run a program made 10 years before in the modern Linux distros?
Why /etc directory is different for some distros?

The list goes on.
But I digress and see myself out for now.

Why can’t I run a program made 10 years before in the modern Linux distros?

Actually you very well can, if it’s written with UNIX philosophy in mind in C or POSIX shell script

Yeah, only working there makes me a villain, ain’t so?
I quit after a few personal principles were not seen as appropriate (see open source) and I tried to sift through the things that are there.
I learned a lot and many things could improve even Linux community, but many things made me quit.
So, I stuck to my principles and guns, but learned a new things.

But that’s cool your principles made you quit

I wonder why you thought any government would even remotely care about open-source in the first place?
It’s contradiction to centralization structures, they’d never do that…

Cool or not, I always thought that we only live once.
So I speak my mind and stick to my principles.
That’s why this thread.

I very much agree that all that tribalism / trolling / elitism hurts Linux a lot and doesn’t help anyone (maybe except where it’s funny like “I use Arch, btw”

And there are a lot of things we can improve together

EndeavourOS forum is a good starting point template of things improving, in my mind

What do you mean by that specifically?

unwillingness to accept some hard truths.