Seeing as the desktop sharing thread is so populair, why not take it a step further?

I’m really curious about your battlestations/workdesks

While nothing fancy, here is mine:
(Don’t mind the Gundam model kits, it’s something that got out of hand over the years 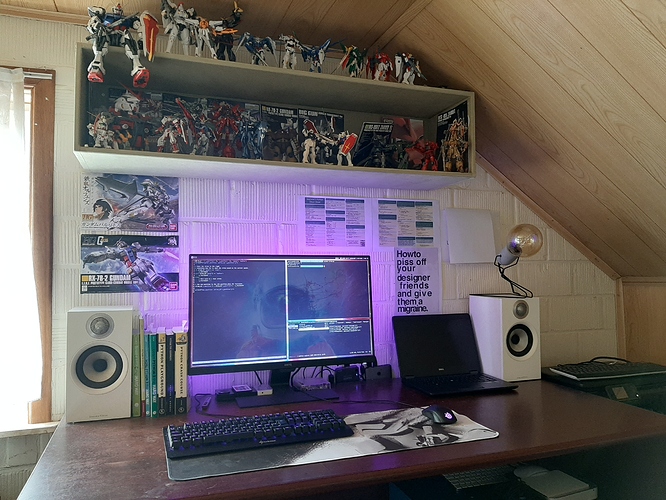 wow, you’re quite a collector

Thanks! They are all scale model kits, built and painted them all myself

Wow that case is a big boy!

What system are you running in there?

My battle station is a perpetual state of chaos …

So’s mine, I took the photo just after I set it up and it’s never been tidy since.

I see you’re using unraid…
I’ve been wondering whether I should keep my system as it is now, with just a normal dual boot,
or give this virtualization thing a go too
And if I do, then there’s the question of going with Unraid or ProxMox

The key question is whether the ability to put mixed disks into an array is a huge plus for you, that flexibility was why I settled on unraid.

It’s easier than proxmoxs, but you also need to be aware that some cheat engines won’t let you play games on a VM. Fortunately I don’t play those games so it doesn’t affect me.

pc gaming is a rarity here, so that’s not an issue.
At the moment I have my Dell workstation that is dual booting linux and windows for my adobe software, and I have a separate old mac mini for some mac only software.
I was hoping a could bring all of that in 1 physical machine with a convenient way to switch between vm’s.

Don’t know if it’s even possible to switch VM’s on the fly with unraid?
I have a secondary Nvidia quadro gpu available too, if passthrough is needed

I’m a big fan of unraid as well. The flexibility with disks that @dodgypast mentioned was just one of the pluses I found when looking through the options. I haven’t done much with VMs on it, other than headless, but my understanding is the ideal set up is dedicating a gpu to a VM with passthrough, like you are saying. From there, that “main” VM would be the one you connect to physically via the gpu plug. After that you could power the others up/down as needed and connect with team viewer or something along those lines. I don’t think passing the gpu around between VMs is something that is quick to do.

Thanks for the quick explanation guys!
When the time comes, I’ll make a separate topic if I have any more question 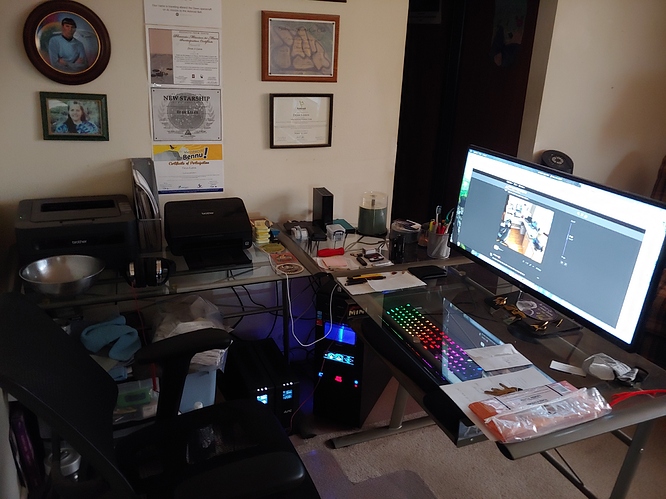 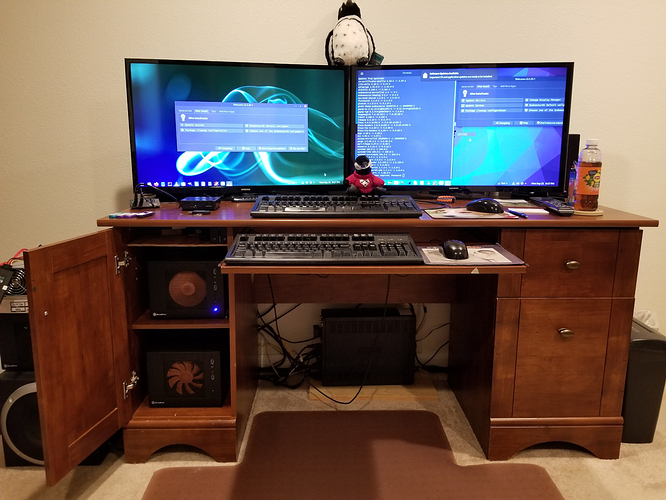 The two Mini ITX cases inside the desk are, on top Ryzen 7 2700 with Nvidia GEForce GTX 1050 Ti running EndeavourOS Gnome. On the bottom, my Windows 10 computer that only gets used once a year at Income Tax time. These two share the Right hand Monitor and the lower Keyboard, & mouse through a KVM switch.

The Odroid N2+, my daily driver for over a month with EndeavourOS arm Gnome, sits on top the desk in front of the left monitor which is connected to the Odroid. The Odroid uses the upper keyboard and mouse.

To the left of the desk, is a sub woofer on the bottom, in the middle another Mini ITX computer case with a Ryzen 5 3400G setup with EndeavourOS Plasma and on top is a test bed slap things together type of thing. 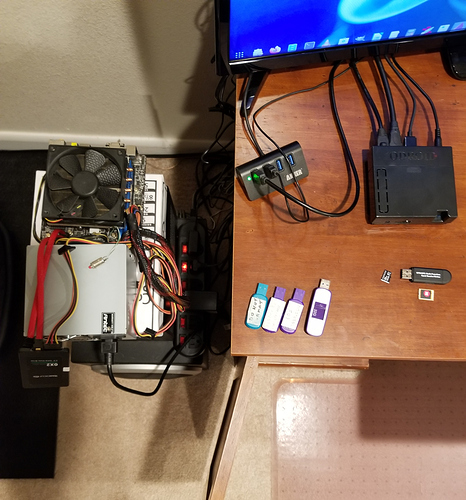 Overhead view of the Odroid N2+ setup on the right, and the test bed to the left.
The Odroid N2+ has EndeavourOS arm with Gnome on an 64 GB eMMC card. Then the micro SD sitting in front of it has EndeavourOS gnome that is set up with everything I need for arm development and updating the EndeavourOS Arm repositories with new package versions.

Now that’s what i call a wide screen! Must be set on stretch mode! 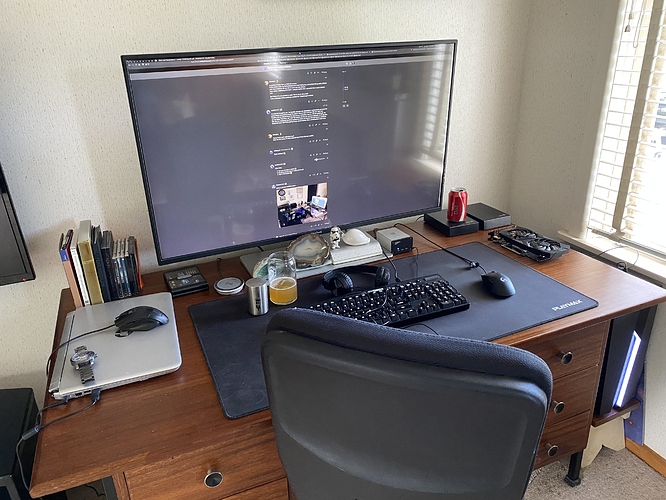 All these people with rather on-point cable management and I am sitting here struggling with the 6 cables for my monitors…
Any tips?