Hello Team, my current desktop has the NVIDIA graphics card. The system works fine with Nouveau drivers. I have been reading some threads wanted to see if I can get the nvidia drivers to work on this old machine.

@ricklinux Hi Rick, if you recall you helped me extensively to get the system running back in October with 340xx and I followed the same approach with new install but not working anymore. I followed the steps in the thread below as well but no luck. May be I missed something. So I reinstalled my old snapshot with timeshift as I couldn’t get past the reached target graphical interface screen…

what are the correct steps to get the nvidia 340xx drivers to install/work?

If this is of any help i can: Boot into GRUB and select endeavourOS or the endeavourOS fallback and i can use the TTY as well. it starts daemons and stuff but then it gets to "Reached target graphical " before stopping doing things and nothing else happening EDIT: i think i know the issue not how to fix it though before i turned off my PC i ran the yay command and pacman command to well update stuff and im guessing whats happened is two nvidia drivers are installed on my computer and i need to …

Nvidia 340xx not working after upgrade to 5.4.8 Kernel & Hardware

I am using Cinnamon DE and lighdm with slick-greeter.

I have the 5.10 LTS kernel installed as well and tried rebooting into it but got stuck to the same screen. 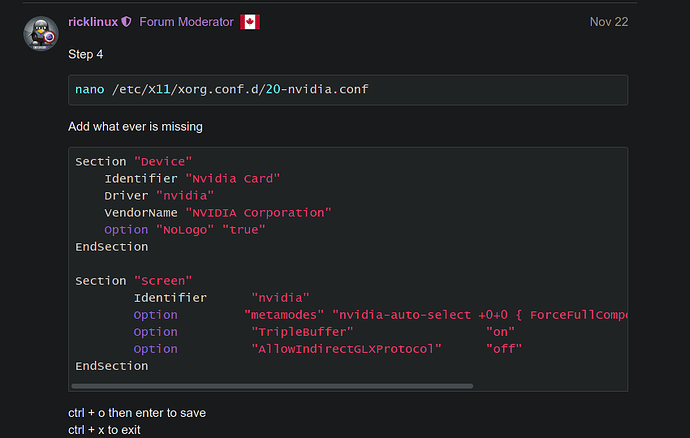 so no 20-nvidia.conf file used?

It didn’t generate automatically at first so I created a new file with the details above. No luck still.

it should not need such config per default… they are only to set options you may need like composition pipeline … dpi settings e.t.c.

can you give what nvidia packages are installed?
pacman -Qs nvidia

Will report back shortly. I’ll install the drivers again.

I had to restore as I wasn’t able to get past the screen.

When we installed the drivers back in October we used.

would it make a difference if I use the LTS kernel?

Yes i think it would…

Why are you using the lts kernel now?

Edit: Is that the only kernel you have installed?

I have both the regular 5.10 LTs and 5.15 installed as part of the online installation via EOS Atlantis:NEO…

You had this working before. So did you do a new install with the latest ISO and you can’t get it working?

So I installed new ISO but using nouveau drivers. I want to see if I can get the nvidia to work again.

installing nvidia-340xx in the background…

This is not dkms version so you probably can’t boot on the lts kernel as there is also an nvidia dkms version for lts. So since you have already gone ahead let it finish and see if it boot’s on the current kernel.

installation finished and getting the following message. I didn’t reboot yet. I suppose I will need to edit the grub files as before? using nvidia-drm.modeset=1 and regenrate grub file using grub-mkconfig -o /boot/grub/grub.cfg correct?

edit: should I install the 340xx-dkms version to work with LTS kernel vs 340xx installed atm?

nvidia-drm.modeset=1 Should already be set in the default grub if you used the latest ISO. Just reboot and see what happens if you try to load the current kernel.

should I install the nvidia-utils before rebooting?

What did you install?