likely never get linux on it natively

i want to game eso on it though

Apple is still selling M1 with overprice memory & SSD , and you cant upgrade memory after…

I saw the announcement. I like the approach they’re taking. One thing i am concerned of is the thermals. If this new chip overheats like the rest of the macbooks, then it’s a waste of resources. But i will take this with a grain of salt till i see a hands on review.
What makes me sad is that apple locked down the hardware, so rip linux on macbooks.
And since this is an arm chip(?), gaming on macOS is dead, unless games come from it’s store. Maybe?

Never say never with Linux on new Mac. There very cleaver people out there

Compared the the 2020 macbooks, which have terrible cooling making them run on 1.2GHZ max on longer loads.

When modded to have optimal performance, it doesn’t increase it’s speed but just runs ar 60 degrees at the same speeds as it would normally.

Apple purposely limited the performance of their previous generations to make the M1 look better than it is and it shows.

Curious how the benchmarks will be once they actually come out, because ‘latest PC laptop chip’ is as vague as it gets 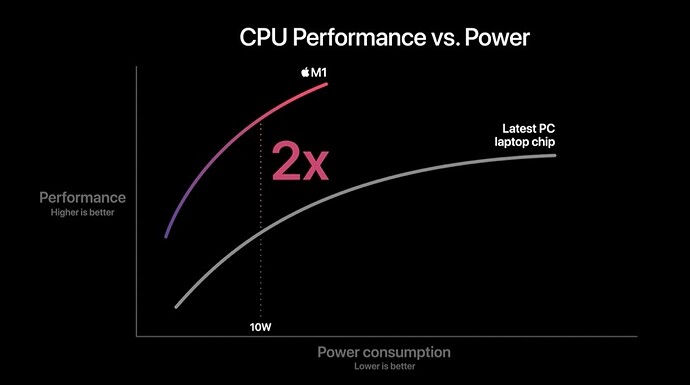 even if it’s functionally on par with recent gen i5 the gpu has 25 terflops of processing power. latest consoles just out have 12. It looks like no upgrade path for memory and i’m guessing the same is true for the ssd size. It looks like its all baked in at the factory. If i had 1200 to throw at it i’d be ordering one.

My advice to you is never buy the first model after an architecture switch.

There will likely be lots of software compatibility issues in the early going.

don’t need a crystal ball to see the yet to be announced M2 will be FASTER and more POWERFUL.

The only relevant metric here would have been a comparison to their prior gen equivalent products respectively.

Giving out a metric like we’re 5x faster than an arbitrary laptop which we’ll leave to your imagination to name is exactly like saying absolutely nothing about its performance. They just added 2 slides of filler.

Oh well… the reviewers will show us what the new chip is made of.

Putting everything on a chip means you’ll have to carry your SSD dongle around. As a sane person can’t be seriously considering paying 800USD for an upgrade from 256GB to 2TB SSD. And that only before ordering.

Apple has started their move to ARM - so maybe an endeavouros arm will do - but it is way too much money to throw at such experiment.

gaming on it isnt dead. they have the ability to use apps from ios natively and they have rosetta2 that is supposed to play intel games flawlessly… i want to test that out at the mac store though. i wonder if they’d let me install eso on it and play it in the store…???

Soon to be canned Opengl support

And now you gotta recompile games for arm.

Yeah. Gaming on mac is basically over.

Gaming on Mac was a thing ??

Yeah it was. WAS

vulkan and metl are essentially the same thing?

Where the hell did you get that Idea. They can’t be any more different from each other.

That’s like saying Directx is the same as Vulkan.