Quote from developer Michail Vourlakos aka psifidotos of Latte Dock:

Unfortunately I would like to inform kde community that I am stepping away from Latte development. No time,motivation or interest from my part is the main reason. I hope that this will give free space and air for new developers/maintainers to step in and move Latte forward.

I hoped that I would be able to release Latte v0.11 but unfortunately I can not. Releasing Latte v0.11 it would mean that someone would maintain it afterwards and that is no more the case.

For the last 6 years developing Latte was a beautiful journey and taught me plenty new things. I would like to thank you all for that beautiful journey, kde community members, users, developers, enthusiasts and plasma developers.

Have fun and enjoy life…

Original link can be found below.

Personally, I doubt this is the end of Latte Dock, it’s an extremely useful and customizable dock, but at least for the moment there is a bit of uncertainty in the air. Here’s hoping some contributors decide to keep it going.

The default KDE panel is quite sufficient for my needs. In fact, even that is too much for me. I’ve grown a certain distaste for icon-based application launchers, I don’t even use a menu. And I was never a fan of that wavy Mac look with animated icons…

I use the terminal emulator to launch programs, GUI or not.

So whether Latte dock continues on, or dies, it will make no difference to me. But my bet is on someone taking over development, or maybe forking it. It’s too popular to just disappear overnight.

I like latte dock when i have tried it but as @Kresimir said i can get along with the KDE panel just fine. I’m not that fussy over all these different docks and stuff. KDE Plasma is a desktop that just works. It doesn’t need to be customized for my use or liking. I like it just the way it is.

KDE Plasma is a desktop that just works. It doesn’t need to be customized for my use or liking.

Yeah, that’s the ironic thing… Plasma is the most customisable DE there is, yet many of its users do not feel the need to change a lot, except maybe switch to a dark theme and change a few colours… On the other hand GNOME offers almost no customisation, yet its users go out of their way to change it

So true! I don’t change much as you said. Those that try to do that usually end up with a broken KDE.

Those that try to do that usually end up with a broken KDE.

With that I disagree… I find it pretty hard to break.

I find it pretty hard to break

You don’t need to break a broken DE

multi-monitor is a self-breaking kde feature.
They fix it in the evening, it’s broken in the morning in a different way

I know, I know, this will end with Plasma 6.

I have two identical monitors and no issues.

I’ve been using multiple monitors with KDE Plasma for years. I’ve had little to no problems at all. I’m not saying that you haven’t had issues. I’m just eager to know exactly what they are.

I reached out to Joey Sneddon (writer of OMGUbuntu) to share the news to spread some awareness since I know he’s reported on Latte Dock from time to time. He was kind enough to do a nice little write up because of the news I sent his way. It’s not Ubuntu related news specifically, so the write up is over on one of his newer websites called https://www.omglinux.com (which I think he only just started up a few months ago so it’s still new).

Anyways, it’s nothing really new information-wise, but if you’re a fan of Joey’s usual writing style, feel free to read it below and if not, no worries! 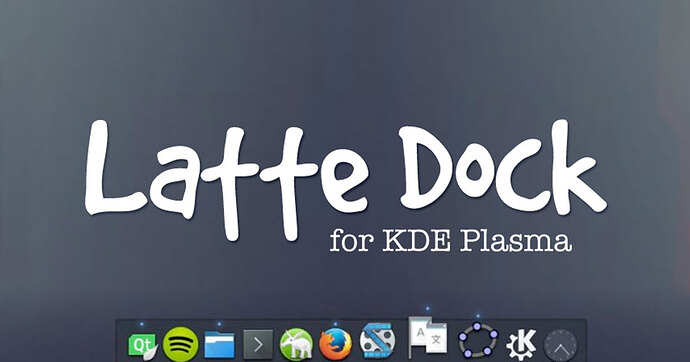 The lead developer of Latte Dock, a popular dock application for KDE Plasma, has announced they are 'stepping away' from the project. In a short blog post

The default KDE panel is quite sufficient for my needs.

And with the newer updates, they had got more polished. Floating panel is interesting, though there are few issues/glitches in dark mode.
Also, as you and others had said, KDE can be customized extensively, and the same applies to the panels as well.

I never really liked Latte Dock because it is very CPU and RAM hungry. Default panel is good enough for me.

I never really liked it myself, I can see why some really like it too

It’s always sad to see a project lose its developer. For me, latte dock is a love hate relationship. I love the using it and how customizable it is but hate that it loves to use lots of ram for no reason…what is strange about that is you can exit out of it and start it back up again, and it won’t be using much ram…then it will creep up and start using a lot again. That being said, if you put enough time into it, you can do quite a bit with the built-in KDE panels and get them pretty close to being as good of a dock as latte dock.

have two identical monitors and no issues

I’ve been using multiple monitors with KDE Plasma for years. I’ve had little to no problems at all

OK, I was just joking. KDE development is very active, which by itself reserves all our respect.
Nevertheless, there is a reason for the joke, as KDE was kind-of forced to create a specific bug tag for multi-screen issues. When someone gets hit by such bugs, it’s like a nightmare. Monitors disappear, panels jumping around, …

And to bring it on topic, Latte dev (Μιχάλης) has done extreme improvement on how Latte could handle multi-monitor problems, and since it’s gone official KDE, I expect and hope they merge his ideas into default Plasma panel.

Contrary to popular belief system - there are many different areas of KDE and it’s programs where it’s applicable, in case you’re keen enough to notice

One fix forward, 200 bugs back

Still it’s best ready to go DE in my opinion.

well, what a shame.

Never had any issue on any DE including Plasma on my Lenovo m93p tinypc where I have 2 monitors plugged in.

I find Plasma stable too.

Never had any issue on any DE including Plasma on my Lenovo m93p tinypc where I have 2 monitors plugged in.

Not about your comment, per se, but there is no sense with this kind of declarations, IMHO.
I never said kde fails on every multi-monitor HW/SW combination.
Isn’t common knowledge that each system is a different combination of HW+SW?
If there are confirmed open bugs on multi-screen bug category, with several different disturbing DE behavior, this is enough to say there must be some problem.
To clarify and FEveryone’sInfo, kde devs acknowledge the fact and have been trying to solve it. It’s not me that I imagined this.

Please, don’t shoot the piano player, or in another way… it’s not who points to the storm responsible for the storm. Peace!

The practical problem at development side, is that KDE5 code base has been forwarded from KDE4, which was mainly in some C derivative. They have difficulty with this language and that’s why they had chosen Qt-whatever for KDE5.