Looking to install Latte Dock, is it the best option for a dock when it comes to Plasma? I see some had issues with it in the recent past, what other docks work well with Plasma? . Thanks.

latte dock is great. It is complete drop-in replacement for plasma panels and is well integrated.

Like always, I am going to recommend you just try it. If it doesn’t work for you, try something else.

As a side note, I have been using latte since it’s early days. It has been pretty solid. However, it does a lot of different things so I wouldn’t worry about feedback about it not working for a particular use case. Just try it for yourself and see if it meets your needs.

Latte working great lately, used it for about 6 month and happy

I’m happy with the default panel. I just need the Virtual Desktop widget, the Task Manager and the System Tray.

I don’t want my desktop to look like mac with those big animated icons… Yuck.

Therefore, Latte dock is too much for my needs. Bloat.

I would guess latte-dock from the official repos is the one you want.

You should only install that if you want the latest code in development.

In general, you should avoid *-git packages unless you have a reason to install them.

I don’t want my desktop to look like mac with those big animated icons… Yuck.

I got bored looking at unixporn on Reddit - it seems that of all the ‘non-standard’ desktops, the Mac layouts are the favourites.

I set Krohnkite with no space around the edges (this means I can ‘fullscreen’ an app with no border and still have my clock on top) - then it all to goes away (set to dodge).
I also have my menu’s in the Material titlebar if I switch to Floating layout so I don’t need the global menu showing all the time (autohide).

So my Latte is mostly invisible - I don’t really like or need to click things - all that aiming is tedious… gestures and keyboard shortcuts are more efficient.

Once you have a shortcut to bring your activities up, present your windows, all that kind of stuff - then you don’t need a stupid dock; only the tray and the clock really most of the time.

I’ll take the git, it’s sexy - and I like the event calendar to be ‘on demand’ always on top or put away. 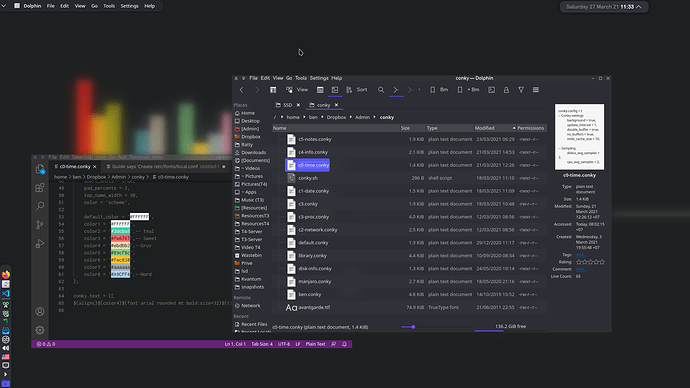 i don’t think docks are stupid at all

Two ways I switch Activities - if my hand is on the mouse, I swipe left to pull up the activity switcher. To switch Desktops I draw an arrow gesture going left/right, or hook the top right corner to present desktops; to present windows going up left.

I think this is one reason many people love Gnome over KDE, the way activities and workspaces and app switching is handled is very advanced compared to a vanilla KDE desktop.

So keyboard shortcuts aren’t good for a mouse jockey, and ‘Hot Corners’ is annoying in that you either need a frustrating delay to avoid accidental triggering or very good mouse discipline - that’s why I have ‘Meta+D’ mapped to a mouse gesture.

Anyone driving a new BMW understands gestures when they simply move a hand without looking to adjust music and volume as they drive…
… or why they can’t be hidden when not actually in use.

As others mentioned, for KDE - latte is where it’s at. It’s built in qt, and it’s really made for Plasma. Anything GTK, I prefer plank or tint2.

I’ll add my two cents for what they’re worth (probably less than two cents):

I really like the options and flexibility that I can get with Latte. But here are 4 points to consider against using it

1.) If you distro hop or reformat, it becomes a pain to get your setup back. Make sure to look into saving your setup somehow (I’m not sure this is possible, but I think this feature was recently added)

2.) There are some quirks with Latte and if you’re using your desktop with icons. There is (or at least was last time I tried it) a weird issue where Plasma doesn’t recognize the Latte Dock as a panel and will push icons under the dock, if that makes sense. If it doesn’t, it’s only an issue if you use your desktop “tradiionally.”

3.) Its rather resource heavy. Now its only an issue if you’re running demanding games or something, but I have noticed a delta in performance with and without latte

4.) Final point, is that kde is flexible enough that I can do anything I want with it. There is one eye-candy feature that I can’t do and hope the Plasma team gets around to implementing it by default sometime, but it really isn’t enough to over the earlier 3 issues. As I said, Plasma is sufficient for MY needs; if you need additional funcationlity, then obviously this point is moot.

Best thing to do is: try it out! Give it a spin and keep my, and everyone else’s feedback in the back of your mind, and see if it works for you.

1.) If you distro hop or reformat, it becomes a pain to get your setup back. Make sure to look into saving your setup somehow (I’m not sure this is possible, but I think this feature was recently added)

Wow, you must know that if you use Timeshift - then the entire shebang is backed up right?
And failing any tools, you can just do rsync for the entire /home folder content to an external drive ready so that If you reinstall you juz copy that back and it’s like you never even changed distribution…

I went from Mint (cinnamon) to Plasma and brought essentially 95% of my desktop ready set up - but there were many issues with shortcuts. Going to any other Plasma desktop wouldn’t cause any issues at all… install, copy back, log in - 20 minutes tops.

But yes, Latte can be buggy - I kill it if I start a game (not an issue - we have krunner to call it back.

It also pays to stop and think once in a while - why do you need a panel, or a dock, of any kind?

Just have a go - delete that panel, kill latte, and try it with just krunner. You’ll be surprised… but also a little disappointed that krunner works, but you can’t have the default menu without having a plasmoid on a panel or on the desktop (is that right? maybe I just don’t know how).

I used to frequently test out latte dock for a few heavy days of usage at a time. It seems like I’d always end up with the settings and layout pretty much identical to the KDE panel

@helpcomputer
Welcome to the forum. Thanks for giving EndeavourOS a try. I hope you enjoy your time here.

Welcome aboard helpcomputer!
I think latte is the best dock for plasma, with Cairo coming in second (but it has bugs)