Issues with WoW in Linux

Broke this out into its own topic in the gaming forum, as it got flagged as off-topic in the original place (whatever, I guess, it was really just in passing, but I’ll expand on it here).

Anyhoo, I’ve been playing WoW on Linux for the past 18 months, but for some reason all of a sudden about 3 weeks ago it started throwing up this error: 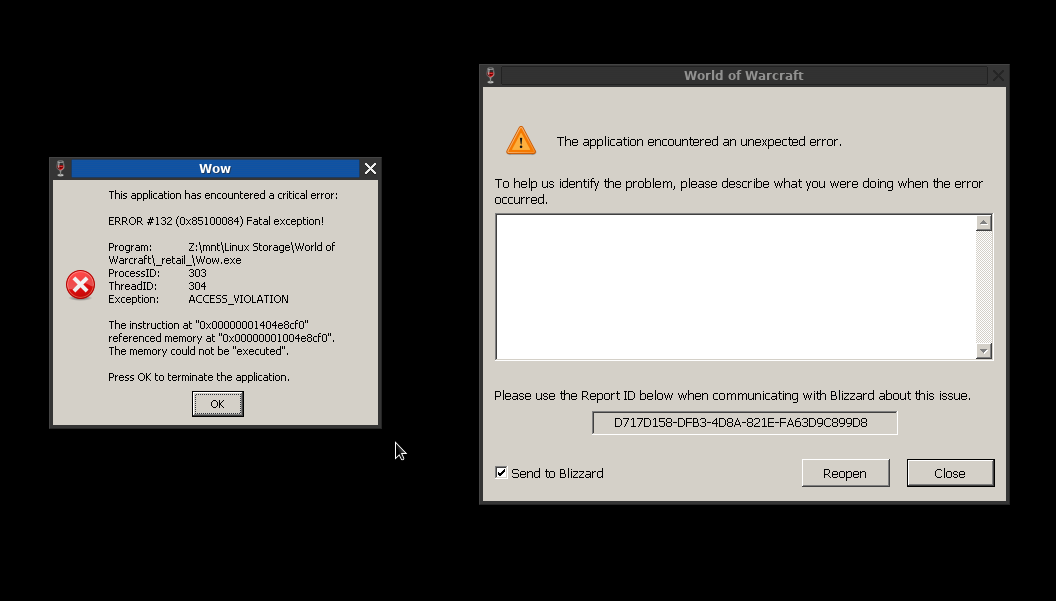 It usually happens after about 10 minutes or so, and it now persists across various distros, game re-installations etc.

Thought it was faulty ram, so bought another 16Gb and swapped it out: Same result.

Thought it might be the GPU: Took it out and ran it on the i7-7700k’s built in intel chip - still crashes.

Tried various versions of Wine & DXVK, disabling DXVK/VK3D altogether, even disabling all addons in WoW, but nothing works.

The only components that are still in common are the motherboard and CPU, and I’m tending to think it might be the CPU, because I can see microcode errors when starting any arch-based linux distro (Endeavour/Manjaro/Arch).

Guess I’ll have to stick with playing on Windows until I get a new PC, which is depressing. That said I can still use Linux for everything else (browsing/office etc), it’s just WoW constantly crashing…

AND power supply. Everything starts with good clean power. It’s rare, but I have seen PSUs get funky when the ambient temp goes up.

You might want to take the cover off the computer, blow out the dust, and set a 10 inch or so fan blowing into the case, and see if it temperature related.

I’ve had a look at temps, and when the system crashes temps are absolutely normal. Nothing anywhere near hot enough to crash like this, with both CPU and GPU in and around 40-50c. Used a hardware monitor on my 2nd screen, and the DXVK Mangohud to monitor temps 2 different ways, just in case. I’ve also got my fans set to turbo mode now, keeping everything cool (I use water cooling for the CPU and it’s set to TPU2 in the Bios).

I actually had an issue with hardware errors recently, which I fixed by updating my BIOS and adjusting some XMP RAM timings. But yeah with everything you’ve tried, especially switching the hardware and trying different kernels/distros, I’d think it’s most likely a CPU problem.

Unfortunately the last BIOS update my motherboard had was in April of 2018, which was about 6 months after I bought the parts. Whether I use the XMP settings or manually set everything it still crashes. Interestingly XMP actually underclocks my ram, which is odd. I have (now) 32Gb of 3200 DDR4 ram, which gets set to 2933 by XMP. Still crashes. I’ve also set it to run at 2133 and still it crashes. But I know it’s not the memory per se, because I’ve run different configurations from 1 stick of 8Gb to swapping out the ram entirely and runnning on the new 16Gb alone. No luck.

As mentioned, the only other issue is that whenever I’m booting an Arch-based distro, such as Endeavour/Manjaro/Vanilla Arch, I get Microcode errors during the OS boot process such as the following, which don’t appear during Ubuntu-based distro boots (Xubuntu/Pop!_OS etc), but they may just hide the same messages during boot: 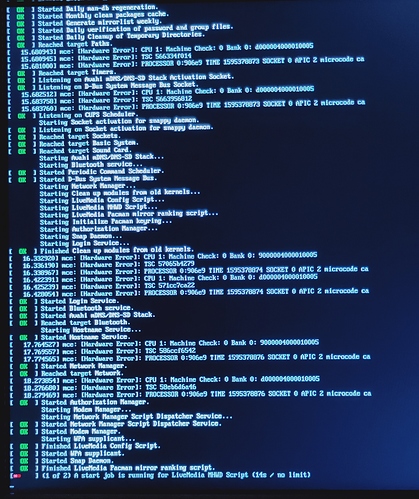 The only other thing I should mention is the dreaded Windows 10 (Pro). It works fine. No issues whatsoever. WoW runs great, never crashes and I don’t see any microcode errors in the event/system logs.

Which motherboard?
And exact models of RAM parts please

I downgraded my Bios to see if the most recent version was being the issue, so far no crashes, but it’s early days yet.

Also running ras-mc-ctl --errors returns a shedload of errors like this:

@Sar
Ok i wanna make sure you follow extreme RAM 101, which in my experience are:

I downgraded my Bios to see if the most recent version was being the issue, so far no crashes, but it’s early days yet.

That is my concern here, it absolutely should NOT go over default turbo of 4.5 with or without XMP…
For this CPU alone 4.8GHz is not a problem at all, and your temps are all good, but in conjunction with extreme DDR4 RAM (actually your case is far from today’s standard of extreme with 3200mHz, but still by definition it is) - it might be little hard for CPU / motherboard to chew this turbo, plus personally i have no experience with ASUSTeK motherboards, maybe they lie in some specifications like a lot of chinese companies do, but let’s assume it’s not the case here.

So, both RAM have exactly same voltage and timings on side stickers?
If so, there’s no need to set independently, you can use master voltage / timings coz subtimings which could be in play with tech-process differences you wouldn’t guess anyway…

Not to bash or anything, but A-Data & Crucial are not most reliable SSDs out there, hopefully they’re not failing (which may lead to all kinds of random crazy stuff).

So just to exclude all possibilities i would advice:

If tests are fine - then it’s drives (SSDs to be precise) start with Crucial and try to exclude them one by one.

I’m also not sure that this is the cause of WoW crash here, still system must be intact so it’s good for you to check all this things

P.S. Oh, and start tests with single screen too, just in case as minimal as you can

Once upon a time, when i wasn’t experienced i throw away videocard, just to find out that there was a freaking dvi CABLE problem

Thank you very much for the detailed reply Key, I’ll have a run at that later today. Still running WoW atm to see if it remains stable for the time being.

Not overly concerned with the MCE errors, because it could just be something that’s not overly worrying creating errors that look like it, and they might’ve been happening all the time anyway, and it’s only recently I’ve noticed it as I’ve been looking out for reasons for the WoW crashes.

Not overly concerned with the MCE errors, because it could just be something that’s not overly worrying creating errors that look like it, and they might’ve been happening all the time anyway, and it’s only recently I’ve noticed it as I’ve been looking out for reasons for the WoW crashes.

Definitely not good sign anyway, shouldn’t really get them

Agreed, but if Windows isn’t crashing or showing anything in the error logs because of it then I’m guessing it’s a linux specific thing?

Either way, been in WoW for about 45 minutes so far and no crashes yet, which is a good sign, but I’ll run through your suggested tests after lunch and see how I get on

Agreed, but if Windows isn’t crashing or showing anything in the error logs because of it then I’m guessing it’s a linux specific thing?

Depends, Windows logs are…Well, let’s just say, unless you run some stress test like OCCT with large data set - you won’t see any, unless there is something really hardcore which will lead to BSOD, but those errors which are silent in Windows without stess-test - could lead to loss of data and program crashes.

Linux is way more strict, which is good

come now, there must be some pfff days too

it absolutely should NOT go over default turbo of 4.5 with or without XMP

ASUS absolutely LOVES to enable “Auto Overclocking” on their boards. I love their hardware, and their motherboards are exceptionally good at overclocking, but I hate how they always do that by default.

Oh, i thought ASUSTeK is some “more chinese” ASUS imposter

ASUS absolutely LOVES to enable “Auto Overclocking” on their boards.

Yep…never a good idea from the go

Some memory modules won’t run at spec speeds unless XMP is enabled: the manufacturer expects the users to enable XMP so they can get the performance they have paid for. Apparently, as it has been in the news recently, Intel refuses to cover parts under warranty if overclocking has has been used and they include XMP in there.

Some memory modules won’t run at spec speeds unless XMP is enabled:

Really? There are modules which you can’t run manually??

Can you please give an example?

I meant you are forced to do overclocking and they have an XMP profile set up to allow nominal performance. You can definitely do that manually. I didn’t realise you are against the automated part of the oveclocking. But anyway, you’d argue the manufacturer knows the tolerances of their products best so the XMP should be the safest.

Some memory modules won’t run at spec speeds unless XMP is enabled: the manufacturer expects the users to enable XMP so they can get the performance they have paid for

The problem with that is motherboard. For example, some early AMD X370 chipsets would not go to XMP settings. Some RAM will not reach XMP speed and timings on certain boards, and I don’t think I’ve ever had a client in my line of work who’s actually matched their RAM with the RAM tested on their motherboard manufacturer’s QVL.

The memory should be able to work at the XMP specified settings, that’s what I’m saying.
It’s true there are many issues with motherboards supporting those settings. For example my machine won’t POST when I enable the XMP profile on the RAM, even if the profile sets the memory at the frequency both the RAM manufacturer and the laptop manufacturer support. But the thing is, it won’t post even if i set the same settings manually. Nor even when I set them to some more relaxed settings.
For this reason I can use the 2666mhz memory I have bought at only 2400Mhz.

But anyway, you’d argue the manufacturer knows the tolerances of their products best so the XMP should be the safest.

Well i mean…In perfect world, for newbies maybe it’s safest, but in reality even then - most of times it is just not the case

So technically speaking at least for now, with rare exceptions only XMP = off may be considered 100% safe (given that motherboard and CPU at least supports default specs, of course)