Hi all,
basically the title. I’m thinking of upgrade from my Raspberry Pi Mobel B (no mistake in the model indicated, just very old), to a Raspberry Pi 4 Model B and in the meantime I’ll like to switch also from Raspberrry Pi OS to EndeavourOS because I’m more used to arch system mainteinance instead of debian based ones (right now my old model isn’t officially supported by Arch ARM sadly).
My setup is really simple, I use it as a headless media server with minidlna and samba, but I have no monitor to attach it too for the installation, and in this Raspberry Pi OS is very handy because the installer just make you setup ssh etc during the SD card flash. So my question: exists something similar or there is a way to do it for EndevaourOS ARM or I’ve to find somewhere a monitor to do the installation?
I’ve checked the wiki but didn’t find anything like that (I could have missed it admidetly).
Thanks for you time and your work.

As far I know you need a monitor for the initial install process for headless server, but don’t need it later.
There is a wiki article on it:

This method should work on every ARM device once Archlinux ARM base is installed. The script lets you choose to do a desktop install or a headless server install. In this case we will be doing a he…

so my question: exists something similar or there is a way to do it for EndevaourOS ARM or I’ve to find somewhere a monitor to do the installation?

If you have a Television with HDMI in, you can temporarily hook the RPi 4b up to the TV.
Then you would need a HDMI to micro HDMI converter cable and a usb keyboard.

If you don’t have a usb keyboard, you could maybe borrow one from a friend for a day.
Then the only hardware you would need would be the HDMI to micro HDMI cable.

After conferring with @Shjim I decided to investigate this further.

Yes, one can install a headless server on a RPi 4b via SSH. See this how-to.

to print this, click on download and it comes up in a PDF document viewer that allows to save or print the PDF.

I did a test install and it worked. Hopefully the how-to is accurate.

wow that’s incredible! Thank you so much, I’ll try it then on a test SD card and then use it on a RPI4b I’ve at work, if works I can proceed to switch (and also report that everything works correctly).

Oh yeah, I forgot the required neofetch on the test install 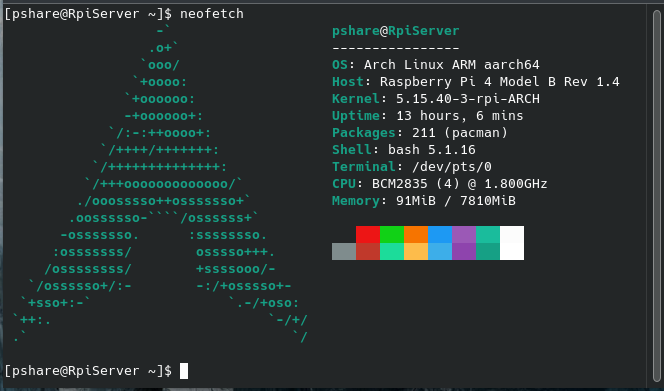 @keybreak Not much bloat here! I didn’t say none, just not much.

Seems ti work fine for me! Have to test It more but now everything appear to work as intended. Will share sono the mandatory neofetch