How do you deal with high dpi on Linux?

Its more a general question, not sure if this is lounge or newbie talk but has been bugging me for the past few weeks.

how do you deal with high dpi 4k screen laptops attached to a lower resolution dpi monitor? It boils down to increasing global scaling on the laptop but then everything appears quite large on the external monitor.

I use Endeavor OS with kde plasma desktop but I also tried alternatives including xfce and gnome, none was really satisfying to me. I scaled down my laptop now to 1080 dpi to avoid dealing with it.

Specifically, which DE do you think can best deal with high dpi settings and do you have a solution where resolution can be adapted/scaled for laptop vs monitor separately?

Finally, I have not yet installed the nvidia driver since I am relatively new to EnOs and am using it for work. Dont want to break my install, need more time to experiment over weekends…

I have a hybrid graphic card, currently using the built in intel. Not sure that installing that nvidia driver would give me more options to deal with this problem would it?

Thanks for any inputs.

I haven’t experienced it myself, but I think your issue is along the same lines as the one below:

[SOLVED]Hidpi issues with apps on xfce, (Use Cinnamon) XFCE

I used xfce4 whilst on Arch and had a really hard time trying to get the scaling of apps to scale correctly. I found some stuff out on my own and was corrected about some stuff by people on the forum. I thought it was all fixed and sorted but sadly I was mistaken. I gave up and have currently installed gnome as that’s the only DE I think works out the box. I realise I bought the wrong laptop for Linux (well for a beginner user). I would much rather be using xfce than gnome but if I have to I’ll …

There’s some good tips and tweaks in that thread, but in skimming it, the OP ended up just using cinnamon DE it looks like. Hopefully this is of some help.

the OP ended up just using cinnamon DE it looks like.

Thanks for that! Completely forgot about cinnamon DE

I recall having checked the Arch wiki too but nothing really solved the problem on kde or xfce, which are my personal preference.

Cinnamon works fantastic with my 3k laptop. I’ll try hooking it up to my TV later, but even when I do, I don’t usually use them in conjunction as dual monitors. But, I’ll see what I can try for you.

If you’re only using the one monitor, with some tweaking, I’ve had very good success with Cinnamon, KDE and XFCE, but Cinnamon is by far the easiest out of the box.

That would be awesome! I had to change my firefox size % back and forth when working on laptop plus monitor, its quite annoying. Plus I just got a 32inch monitor at work, what a blast! Would be great to have the right resolution/tweak to make it work.

no problem, same here but with slow internet connection, meaning tv = no linux update or download else Netflix is crippled.

Will have to do some research, installing a gtk based DE on top of kde may not bode well. I never had a good experience installing several DE on the same system. However, never tried on Endeavor OS. Might get lucky

Could you just give it a go with a live USB? I don’t know if it’s possible, but I thought it could be helpful.

Do you want to “mirror” displays or two separate displays? 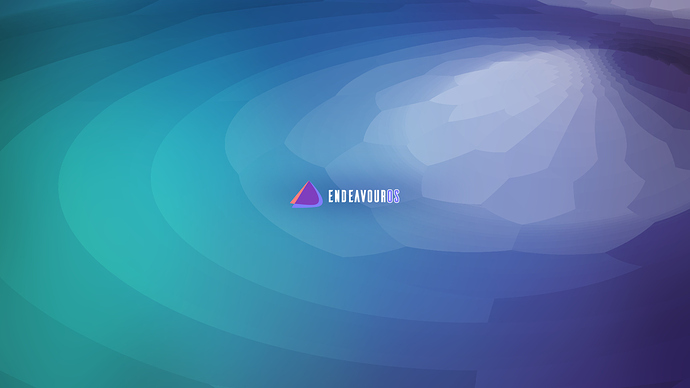 We’re proud to present to you our latest release: endeavouros-2020.09.20-x86_64.iso Our latest release of the combined offline and online installer is available over here. The offline option …

I want to separate screens, laptop main screen with navigation bar and monitor as extension to drag additional apps.

That. . . is absolutely true. Alright. The wife is getting off for a few. Let me see what I can try on my Cinnamon for you.

So, I plugged in the TV, and it came right up, and the default settings looked very good. Scaling between the two looked normal and proportionately scaled respectively. Both the laptop and TV came up with the correct 16:9 aspect ratio automatically. I did no tweaks, and this is the screenshot between them. It would be worth a shot. I’m almost turning into an accidental spokesman for Cinnamon at this point, but it’s the spice of Linux I’m coming to love at this rate. 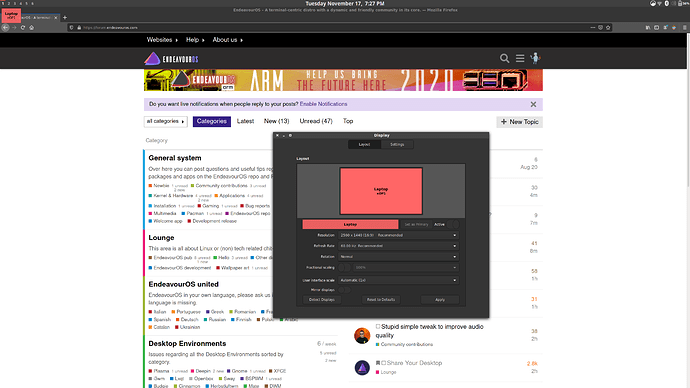 You rock! Now I want to try it. Cinnamon is the spice

Glad to help out another in the community. All I did was plug in an HDMI cable.

Haha! I am now making a backup on my nextcloud server then will try the cinnamon install. Hopefully that will go smoothly.

Oof, no pressure on me, huh? Maybe you should wait until the weekend?

no worries, at least I’ll do the backup and probably sleep over it, weekends are better for sure. If it works, I’ll post that as solved.

I am a fan of Bender, nice choice of avatar…

Bender is my hero. I want to be just like him when I grow up.

And if you have any questions or need help, let me/us know. It’s always nice to have another Cinnamon convert. I wouldn’t wait until the weekend, I’d be too excited. I’ve tried virtually all DE’s, and I think after years of hopping around, I have settled. It’s nice to have something simple that just works.

Alright, here is what happened the last 24h.

Here my recommendations, it boils down to 1) choosing the right installation method (or install of nvidia drivers), 2) display setting, 3) minor fixes for grub/login using the terminal:

The setup I used under Settings/Displays was user interface normal (make sure to select this option for both screens, then 200% fractional scaling for laptop (my resolution 3840x2160) and 100% for external monitor (my resolution 2568x1440).

few minor fixes for the grub menu and login screen that appears tiny:

To change the resolution of the login screen, in cinnamon just go to Settings/Login Window and in the first tab there is an option to change the font dpi, for example to 180 or 300. Then reboot and enjoy!

I have actually distro hopped quite a bit and tried most of the DE. My conclusion is that cinnamon is probably the only DE that can deal with two screens with high dpi and different resolutions. Also the nvidia driver must be installed on hybrid cards, just using the internal intel card will not bode well and lead to either screen tearing, glitches, or others.

If I am wrong, I would happily see someone that can explain how they dealt with it using another DE than cinnamon, very curious to learn more. I am surprised that kde did not work out, but hey thats the beauty of open source, the freedom of choice.

On KDE, I just make all the fonts a bit larger. This is usually enough for Qt applications.

I’m just happy it sounds like you have something usable for now while you continue to look for something even better. Once you selected the Nvidia install it sounds like it was pretty straight forward.

I’m sure there’s a way in kde. There has to be. But it’s really nice Cinnamon works so well out of the gate. I’m really happy to have been able to help.