How do I identify changes between ISO versions?

I installed EndeavourOS a few months ago using the endeavouros-2021.04.17-x86_64.iso, which was well before the current August release came out. There were some issues with that iso which many wonderful testers and the devs ironed out for the August release. During that time my system has functioned just fine (it works quite wonderful actually), but I have come across a few cases where I needed to make some adjustments. Now I’m not referring to individual tweaks to my system per se, but tweaks to keep in line with the sane defaults of EndeavourOS as much as possible. I’ll try my best to explain this with the examples that I’ve noticed. With new releases come new features, new changes, and new defaults and below are two instances where I noticed some changes that weren’t installed/available on my system, but were included later in the latest August .iso release.

For the record, the following were issues that were previously resolved and don’t require any further intervention

A few months ago there were some issues with pacman.conf for some users, including myself and in that case pacman.conf was different from the repos, so you had to grab a copy of the latest version (which would enable parallel downloads until pacman got updated to the newer version on the .iso). For reference, here’s that discussion on this issue that many of you may remember: (Fresh install 6/10/21 - pacman.conf - no #paralelldownloads)

This issue was of course resolved, but at the time required manual intervention on my part to achieve parallel downloads. New users starting off with the August .iso don’t have to worry about this issue with the inclusion of Pacman 6.

It came to my attention only recently via this thread: (This week new python ?!?), that rebuild-detector is installed for new users as a default. When I went to see if I had it installed on my system too, I found out I did not have it installed. This was not a big issue and I was able to manually install the rebuild-detector package, but it did get me to wondering…

What else (if any) could I possibly be missing that has been changed or become a new default or newly installed package since the previous release of EndeavourOS? Like without having to do a fresh install, I’d like to make sure that my system is more or less in sync with any/all changes the EndeavourOS team have made between releases. I’m unaware of any detailed changelog(s) I could look at to verify this myself unfortunately. Would appreciate any help in this matter and thank you kindly for reading my post.

P.s. if anyone can think of a better title for this thread, please feel free to change it as I wasn’t sure how best to title it appropriately.

I’m unaware of any detailed changelog(s) I could look at to verify this myself unfortunately.

I am about to go to a meeting and can’t give you the specific links but you can certainly review the changelogs on github. Also, the release announcements usually have a description of the major changes.

P.s. if anyone can think of a better title for this thread, please feel free to change it as I wasn’t sure how best to title it appropriately.

The resource I always end up using is: 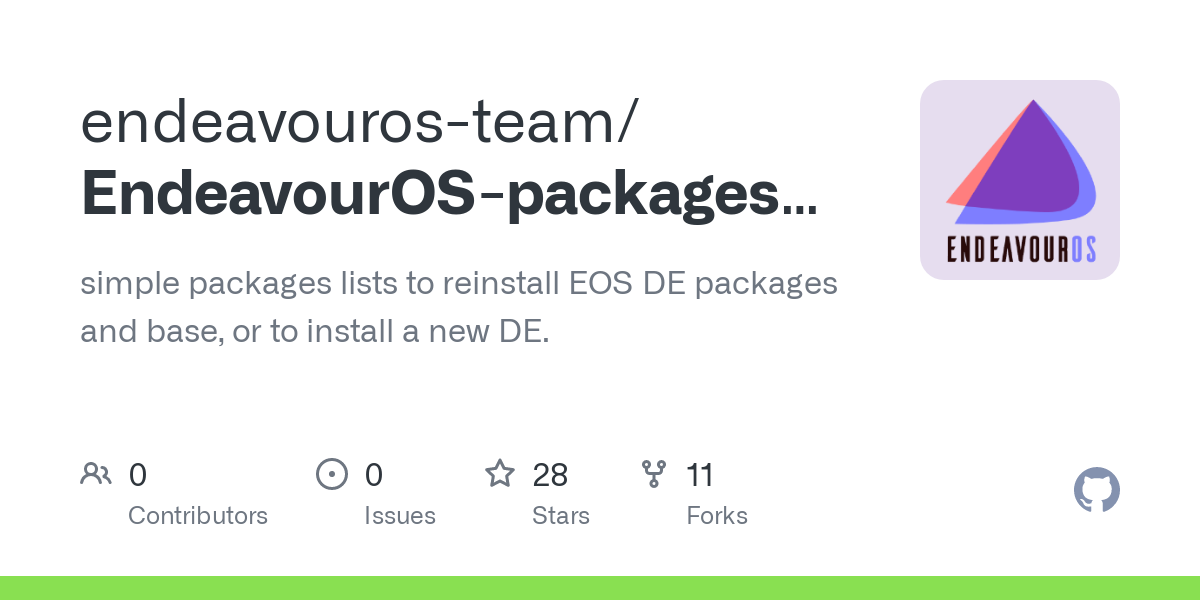 It contains all the lists of packages used by the installer. You can also view the previous versions (“commits” in Git terminology):

simple packages lists to reinstall EOS DE packages and base, or to install a new DE. - Commits · endeavouros-team/EndeavourOS-packages-lists

You can clone it locally and then you can simply use the diff utility to see what is different.

@Kresimir When I view the base package list here: https://github.com/endeavouros-team/EndeavourOS-packages-lists/blob/master/eos-base-group

It shows it hasn’t been updated in 5 months, and when I search for example for rebuild-detector it isn’t there. Is there somewhere else I should be looking?

@dalto I’ve read the release announcements, but they are more like a generalized list of the most relevant changes than like a full on changelog. And that’s for the title change, that makes a lot more sense now.

Is there somewhere else I should be looking?

Ah I think that is exactly what I was looking for! That’s quite a long list too! Searching from the last few most recent commits that added some packages like crda, efitools, duf, pv, nbd, nmap, sshfs, pkgfile, unrar, unzip, xz, and about two dozen more or so packages, I can safely say I might have bitten off more than I can chew! Most, but not all, of those additional packages that were added I don’t have them installed on my system and searching for what those packages functions are it doesn’t appear to me to be mission critical that I need all of these extra packages, though I am still looking through the commit history as well as the full list you provided in the link.

I guess I should only add packages that I know I need specifically for my system, but I can’t say I’m familiar with most of those packages at all.

A bit unsure how best to proceed or if I should just adopt the approach ‘if it ain’t broke don’t fix it’
Is it safe or wise to just keep using my system as is or should I be finding out what additions that have been added that I should be installing as well I wonder?

I was mostly curious about all this because I think the rebuild-detector package is an essential package and I’m glad to finally have it installed, but from my overview of this netinstall.yaml list I can’t say what other packages are deemed essential like that for the average user like myself. I don’t know if it’d be wise to install all (or some of) the corresponding packages that were added since the last .iso release or if perhaps I’m just overthinking all this a bit too much! Thank you very much for the link btw, I’ve bookmarked it for future references.

This would be my advice. Trying to identify everything that may have changed and install them is usually not really needed.

To be fair, while it is useful, I am not sure it is essential or must-have.

perhaps I’m just overthinking all this a bit too much!

I think that, yes, you are in this case

This would be my advice. Trying to identify everything that may have changed and install them is usually not really needed.

Sounds good to me. One less thing to worry about and have anxiety over if I’m doing something right or horribly wrong!

To be fair, while it is useful, I am not sure it is essential or must-have.

I guess to more accurately say that I like the idea of having a package hook tell me when certain AUR packages need to be rebuilt which seemed essential to me. But if in a practical sense that can still be accomplished with or without rebuild-detector, than it just shows I am not as experienced in the ways of Arch maintenance just yet, but each day is the more I learn a little bit more each time.

I think that, yes, you are in this case

Thanks again for taking the time to answer my questions and concerns, I do greatly appreciate it and it helps me as well to become a little bit more confident in using my system, which is always a good peace of mind to have!

Unless you have an immense number of AUR packages, over time you will start to learn what triggers the need to rebuild them.

Alternatively, you rebuild them if they stop working

For context, I pay no attention to this at all and I end up in the situation less than once per year where an AUR package isn’t working and needs to be rebuilt. It really depends on which specific packages you are using from AUR though.

Unless you have an immense number of AUR packages

I do my best to keep my reliance on AUR packages as minimal as I can. Currently have ~40 AUR packages, hopefully that’s a low enough number that I don’t see too many issues pop up too often.

For context, I pay no attention to this at all and I end up in the situation less than once per year where an AUR package isn’t working and needs to be rebuilt. It really depends on which specific packages you are using from AUR though.

That’s very reassuring to know things work smoothly for you 99.9% of the time. Keep it up and maybe one day I might be helping you! Haha, just kidding

I do my best to keep my reliance on AUR packages as minimal as I can. Currently have ~40 AUR packages

That is quite a lot I would say.

That is quite a lot I would say.

There was a topic about that a while back. Let me see if I can find it…

Ah an interesting read! Looks like I have a bit more than the average user, but I wouldn’t call myself an AUR package hoarder. I swear it’s only because I pull a bunch of python and Yaru packages that it’s that high

I used rebuild-detector from aur before and it got promoted to the arch repo. I find it useful atleast. But it can be a opinion. Sure if endeavouros find good things why not. I made te topic also to highlight stuf but overthinking you never must lol…lol

Keeping it minimal I see. And I thought I was heavy on the AUR.