Does anyone know of a good Thin and Light laptop for basic programming and Development?

Now that I’ve been admitted to an American College(yay), I’m now in the market for an Ultrabook to use for the next 4 or 5 years. I’ve been doing my reaserch here and there, but each machine feels like it’s missing something…

I’ll post here, some of the machines I have been looking at and post some pros and cons of them. What do you guys think of these machines and what other machines do you recommend?

Official Linux support from system76(drivers are in the AUR)

Con: smallest battery of them all

No indication of screen color accuracy.

up to 64Gigs of Memory

Official support for Linux(drivers are in AUR)

No thunderbolt support(though may not need it)

Official support may be difficult in America.

Some models have soldered components.

Not all models officially support Linux

I use a lot of laptops and my LG Gram is probably my favorite for general productivity purposes.

That being said, don’t feel like you need to limit yourself to a laptop with explicit Linux support. Many other laptops will work fine with Linux and probably cost less.

All supported (as in still not EOL models) Thinkpad models do now officially support linux (ubuntu, at least). I’ve had the A485, T495 (still have) and T14 AMD (still have). All 3 GREAT linux machines (The A485 took about 18 months for them to get the bios issues worked out, but it did eventually get there). I could easily recommend any of the 3, although since the T14 is still being made, and can be had with the really nice 400-nit non-touchscreen, I would recommend that if you’re willing to afford it. And it’s not THAT expensive. I got my T14 (4750u/16GB soldered/256GB/400-nit FHD/backlit keyboard) for about $100 more than the STARTING price on the Lemur Pro. Click to upgrade the Lemur pro to the i7 from the i5, and it’s now more expensive than I paid for the T14 AMD. Also the Lemure Pro is 8GB soldered, with a single DIMM, so no way to get a nice balanced 2x16=32GB, it’s instead 8+{0,8,16,32}.

For other models, there’s nothing wrong IMO with my T495 (or the E495 if you want to spend less but I don’t believe is still available new from Lenovo), which can still be purchased new (last I looked) even though it’s only the “preconfigured” builds that can still be purchased, no custom configurations. Or if you can find a decent built L14 AMD, that would be a bit cheaper than the T14, and still has 2 DIMMs instead of only 1 (T495s and T14s avoid, soldered memory only. Basically avoid anything T480s and newer if it’s an “S” model, as it will have soldered memory only). If you looked at a E14, T14 or T495, make sure to get one with 16GB soldered, as they only have a single DIMM to expand. I haven’t seen an E14 for sale with 16GB soldered, but according to several sites they do exist.

Why no love for Dell Latitudes? The current ones are a little smaller and lighter than the Thinkpads, about the same price, and only downside is no Ryzen, Intel only on the CPU.

Not much experience with anything but desktops - and that little on Toshiba!

Other Dell lines seem to work fine, I have an older XPS and indeed it was a horrible experience putting Linux on it, but in the end it worked out.

I’ve taken a look at the t14 and it seems legit. I thought they all had solder RAM But I didn’t see that there was another dimm slot available.

Just one question. Do the fingerprint reader and IR Camera unlock work? Also, is the SSD soldered or is that replaceable? 200 dollars for 500gigs is way overpriced.

I have a Dell XPS 9380. It came with Ubuntu 18.04. Other Linux OS that I have put on it have also worked nicely (Linux Mint, MX Linux, Manjaro, Arcolinux and Endeavour OS).

Have been using it since may with multiple distros . Early days were a little rough , but she all smooth sailing now . The FN keys require either a patched kernel or DKMS modules. but that’s all slated to be merged into 5.11 IIRC .

As long as you stick with their business line of computers you should be okay.

I’m still using my old Latitude E7450 daily, even though I have a way more powerful laptop…
Keyboard wise it’s the next best thing to a Thinkpad in my opinion, it’s also the reason why I keep it around.

I’d be looking for something with as many cores as possible. You’ll be needing those for compiling, project indexing, GIT packing, virtual machines (for mobile programming for example).
Also 32GB RAM would be ideal for VMs, but that can be upgraded down the line (an upgradable laptop would be best here).

Right now, the best bang for the buck are Ryzen laptops IMO.
I recommend notebookcheck.com reviews as they tend to touch the most important aspects and have very good comparison charts with popular machines.

Here’s an example of two almost identical machines spec wise, except the CPU, which allows for a good comparison for CPU preformance: 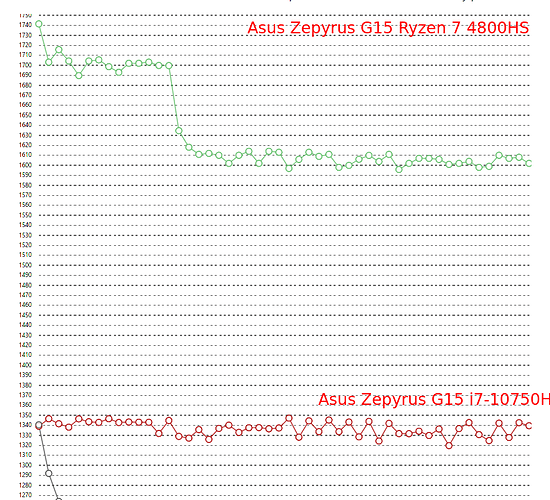 T14 is apparently only 65% sRGB. That’s way too low for Digital painting and other stuff I do outside of development.

Their P-Series seems intriguing though.

Edit; Holy crap those are wayy to expensive XD

The Tuxedo model looks pretty good spec and price wise. Also, if you’re interested in the screen colors, it means you plan to use its display for your work, so the 15.6 inch display is a plus I think. Although for any serious development or graphics work one or more external displays are the norm.
For this reason when I buy a machine for development I tend to not look at the display of the laptop too much. I only look at the resolution, as variable scaling is somewhat of a problem in Linux (no idea if it’s better in Windows or macOS).

OMG I FEEL LIKE AN IDIOT. I CAN JUST CALIBRATE THE DISPLAY MY SELF WITH DISPLAYCAL. EXCUSE ME, MY LAST TWO BRAIN CELLS??!?!??
sigh

And System76 is best in terms of freedom i guess, no IntelME, free bios etc

This seems like a good deal to me. https://www.amazon.com/Zephyrus-Gaming-GeForce-Windows-GA502IU-ES76/dp/B0865VBN6X
If you’re not so much into gaming you can do with the lower graphics card version and get a very good price.

One thing I just noticed on the Zepyrus is the fact that the F1-12 Buttons are spaced out as groups of four, making them easier to quickly identify (a great thing for debugging, where you use them extensively).

The G14 rather than the 15 has the greater build quality, thermal management , smaller size and iirc the greater quality screen .

Depends what one is after I guess .