I’m looking to see if there is a place online that discusses different variations of games that may have been released on multiple platforms.

An example would be Doom released in 1993 on PC then soon ported to almost every console on the market. Many of the ported versions of Doom has different levels and music compared to the original released on PC because they didn’t have the capabilities of the PC at the time.

This one is best all-around, there are plenty of other ones (fandoms, gog / steam forums etc)

For example if you search PCGamingWiki for DOOM, you’ll find link for DOOM wiki / fandom, where you’ll see this: 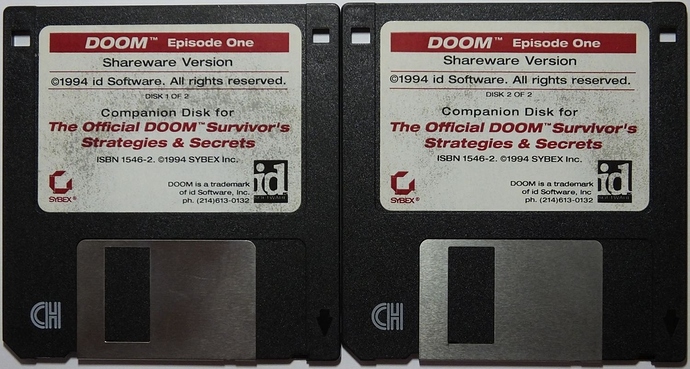 Versions of Doom and Doom II

From 1993 to 1995, various versions of Doom and Doom II were released by id Software to address bugs and input from players and fans. Additionally a few pre-release builds were preserved by testers, which eventually made their way to public archives....

Thankfully, @keybreak helped me get it working in Wine. So there’s at least that.

Thanks for the reply. PCGamingWiki looks great, but I’ve come to the conclusion that I don’t think there is a website with the specific info I’m looking for. With your help and sites I’ve found, there is some great resources out there to potentially find the info I’m looking for, such as this sweet gem,

An unofficial port of Doom to Linux was released by id programmer Dave Taylor in 1994; it was hosted by id but not supported or made official.
https://en.wikipedia.org/wiki/Doom_(1993_video_game)#Release

So later today I’ll be off trying to find this Linux port from 1994. I have no idea if it would even run in Linux today.

So later today I’ll be off trying to find this Linux port from 1994. I have no idea if it would even run in Linux today.

I was able to find only source code v1.10, which should be the latest available…

A lot of fans for this game out there!

The bad news: this code only compiles and runs on linux. We couldn’t
release the dos code because of a copyrighted sound library we used
(wow, was that a mistake – I write my own sound code now), and I
honestly don’t even know what happened to the port that microsoft did
to windows.

John, that’s the good news not the bad one!

Doom may be an extreme example of a beloved game ported and updated so many times over the years. Luckily I don’t think this will be an issue with other games.

It’s just so cool to see how love Doom has received over the years.

I’m working on a “Best Games of All Time” gaming laptop in both Windows and Linux. The goal is to eventually be Linux only for most games but I’ll be forced to use Windows for games that don’t work in Proton yet.

It’s just so cool to see how love Doom has received over the years.

Indeed, for most of PC gamers it was first or one of first games ever…And man - that’s just FREEDOM!

but I’ll be forced to use Windows for games that don’t work in Proton yet.

Note that dual boot with Windows is malicious now:

Windows lets you now to access your Linux filesystem, but Lounge

… you will have to do it from inside WSL and then use File Explorer to browse it. So if you dual-boot Windows and Linux using different disks you can, with this update, access your Linux files on the Linux disk from inside of Windows 10 (albeit inside WSL 2 inside Windows 10). And because WSL 2 is able to expose Linux file systems to File Explorer (the file manager, previously called Windows Explorer) you can use browse a native Linux filesystem (mounted in WSL 2) as though it was a regular o…

Well you can use Windows 7 or something safely of course, especially offline - just avoid Windows 10

Yes, this cannot be stressed enough. Keep that plague out of your Linux box. If you must use windoze, either use separate (disposable) hardware or, preferably, keep it contained in a VM.

I haven’t sat down and blocked off the time to fully figure out and troubleshoot getting Proton and Emulators to work on Linux yet in Endeavour. So Windows is the easiest way for me to enjoy gaming at the moment. Finding a replacement for LaunchBox in Linux is the biggest hurdle for me though. I just love the layout of LaunchBox and the insane Power User options that are available for it(I’m not even that much of a Power User, it’s just handy). Again, it’s just me blocking off some time to figure that stuff out.

Once I get Gaming squared away on Linux, Windows is gone.

Well, PC games - you’re pretty much covered with Linux gaming guide for the most part (be it Steam or Wine + Lutris), apart of very very few which i’m sure will come with time…

Finding a replacement for LaunchBox in Linux is the biggest hurdle for me though. I just love the layout of LaunchBox and the insane Power User options that are available for it(I’m not even that much of a Power User, it’s just handy).

I’m pretty sure @Othoric will come up with a good guide on RetroArch when he’ll get more time, he was very high opinion about it and said it’s misunderstood how great it is by many…
It’s same situation with Wine, so maybe guide will help you with that sometime in future

Otherwise you can probably fork it and create LaunchBox styled front-end for it in the future, it’s FOSS here after all

P.S. There is some movement in there btw https://forums.launchbox-app.com/topic/42523-launchbox-for-linux-preliminary-discussion/

You can run LaunchBox in Wine - ooof

I’m working on a “Best Games of All Time”

Would love to see the results of this. I’ve been reading through Kotaku’s complete directory of classic games recently. As I still have a hankering to keep on playing some old school games…

I remember watching a live stream of the only Developer for Launchbox and him trying to get LaunchBox to natively run on Linux. It was hopeful, but he ultimately decided not to pursue Linux because he’s the only Dev for the project and doesn’t have the time to spare supporting two different OSs.

I’ll check out this video and see what it requires. I’m assuming the games and emulators have to be on an NTFS directory that WINE can access.

I’m pretty sure @Othoric will come up with a good guide on RetroArch when he’ll get more time, he was very high opinion about it and said it’s misunderstood how great it is by many

RetroArch is amazing. I actually use it in conjunction with LaunchBox. The last time RetroArch broke on Arch, I was driven to put Windows 10 back on my machine. I hear the issue has been resolved though as I was following that ticket on GitHub.

Thank you, another best of games list for me to sink my teeth into.

Sweet, found a thread directly from Jason Carr himself on how to install via a script that he created.

I’ve copied and pasted 100 games and I’m into the E section alphabetically.

There used to be a DOS game called scorched earth in the early 90’s that I was addicted to. I wonder If it ever evolved into something better, I’ll have to search to find out.