Can I convert EOS to pure Arch?

If I have an EOS installation with Plasma desktop, can I convert it to pure Arch, and how to do that? Not implying it’s a good idea or a bad idea, just want to know if the option exists, that’s all.

What i can tell you is if you installed Arch KDE it’s not going to be any different or any better than EOS KDE or any other desktop for that matter. All the packages come from Arch except for the few tools, packages and themes that are in the EOS repo. But it’s your choice if you want to do that you could.

It depends what you mean by convert it to “pure Arch”. There is a semantic argument that it totally pointless but I am sure someone won’t be able to stop themselves.

That being said, if you want to de-EOS your machine remove the repo from pacman.conf and uninstall all the EOS/endeavouros packages. Once that is done, you should re-install the packages filesystem and grub. Then fix any resulting breakage, if there is any.

To be honest, I am not really sure what this accomplishes though.

Thanks to all for the info and the extra background on related issues!

Semantics and purism aside, the bottom line for me is whether I can legitimately post on the Arch forum if I “convert” my system. I know the answer I would get if I asked this on the Arch forum. But with all due respect to the Arch community, you guys know EOS better than they do.

whether I can legitimately post on the Arch forum if I “convert” my system.

Legitimately? No. Using the Arch forum requires you to have installed your Arch Linux system the Arch WayTM. Even using an install script disqualifies you from posting there.

However, if you want to be deceitful (I would never recommend such a thing, of course!), you don’t need to convert anything, as long as you’re mindful of what you say (you wouldn’t share a screenshot with neofetch displaying a big fat EndeavourOS logo, of course). It is important to know your system well enough not to accidentally reveal the fact you’re a liar. If they catch you, you’ll probably be banned, but if you behave well they have no reason to investigate you… Just be mindful, for example, that you do not ask about some error and it is revealed that an EndeavourOS package is causing it – that wouldn’t be tolerated (and rightfully so, you’d just be wasting everyone’s time on the Arch forum).

But in practice, there is no way to tell the difference between an EndeavourOS and a vanilla Arch system to which you’ve just added a tiny third-party repo. If you just want to get rid of the EndeavourOS branding and preserve all the functionality (like keep using EndeavourOS repo), you can simply remove the eos-hooks package and reinstall filesystem and lsb-release.

That said, you should try installing Arch. It’s not at all difficult, it’s a nice, intermediate-difficulty exercise in following a guide… And then when you say “BTW, I use Arch”, there won’t be that tiny part of your soul rotting away, because deep down inside you know that what you’ve said was a lie. Not that anyone else cares, but for your peace of mind…

“BTW i use Arch!” I don’t feel any part of my tiny soul rotting away? Nobody here knows if I’m lying. I could be. Maybe? Maybe not! I have lots of computers, many drives. What else could i do… install Arch i guess.

I’m glad, because in the long run, lying to oneself is much worse than lying to others.

I could say I use Arch but i converted it to EOS!

I’ve done that (several times) - installed the Arch way, set it up - then found myself missing EnOS goodies too much and added in the repo! Strangely enough, I have fewer packages on the actual Arch setups though… less experimentation?

I always come back to EOS.

I installed Arch the Archway. Went all the way with customizing it to suit me then I just removed everything and installed EnOS because I love it too much.

This is the OP again. I like EOS. I am shelving for now the idea of switching to pure Arch.

Semantics and purism aside, the bottom line for me is whether I can legitimately post on the Arch forum if I “convert” my system

You can legitimately post on Arch for sure. The caveat to that will hit you when you ask a question and they reply will be “how or why did you install X package in the first place.” And if you don’t have a really good answer, that coincides with the wiki, they will figure out really quick you didn’t actually install it.

The landslide after that will basically black list you from help.

I’m glad, because in the long run, lying to oneself is much worse than lying to others.

The root of all my problems.

I’m guilty sometimes too. I used Anarchy the other day. But i installed in VM so that doesn’t count!

Right. As long as we keep problems bottled up, they don’t count. I tell my therapist that regularly.

As long as you don’t tell it to other people on Reddit, it should be okay. What’s the point of having self-esteem, anyway? It doesn’t get you any Reddit karma… 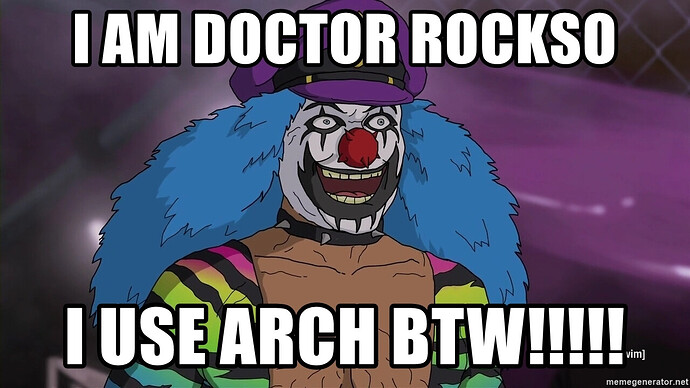