I have a brand new Raspberry Pi 400. This is my first attempt at an Arm device. I have booted on the micro sd card that came with it and was able to update the Pi OS that was preloaded and then i set to boot from USB. As far as i know this is just Noobs that comes on the preloaded micro sd card. It is my understanding that you are supposed to download the Pi imager and load Raspberry pi on another micro sd or other device. That’s a project for later as i want to load Endeavour Arm. Now I’m trying to figure out how to load Eos Arm onto an external SSD drive that i can boot from. I’m not understanding the process. I booted on the live ISO and ran the Arm install Imager. But I’m not sure what that did. It shows a file system on it which i selected btrfs. Other than that I’m not sure what’s what? I know I’m Arm illiterate.

load Eos Arm onto an external SSD drive that i can boot from.

I don’t have a SSD but @Pudge does, I ll let him guide you on it.

Nothing came up to show me anything for a desktop so obviously I’m not doing things right? 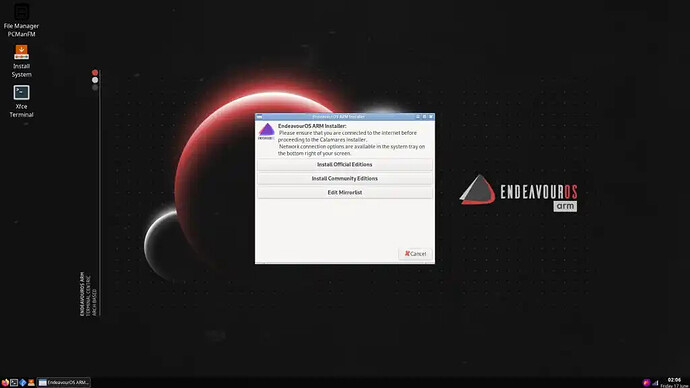 Edit:
On the first boot

I’m misunderstanding? I booted on the live ISO and then i used Welcome to image the External SSD. Is that not the way?

I haven’t tried booting on the external SSD yet.

Edit: Plugged it in and tried booting on it but nothing comes on the screen.

Now I’m trying to figure out how to load Eos Arm onto an external SSD drive that i can boot from. I’m not understanding the process. I booted on the live ISO and ran the Arm install Imager. But I’m not sure what that did. It shows a file system on it which i selected btrfs.

Correct, boot the x86_64 machine on the live ISO. In welcome click on the “Install Endeavouros ARM” button.

When the script runs, you choose file system type, and then it does a lsblk command and shows which devices are active. Choose the target USB SSD that you want to install to.

When it finishes, power down the x86_64 machine and remove the External USB SSD.

On your RPi 400 plug the USB SSD into one of the USB 3 ports (blue) ports. The USB port next to the LAN jack (white) is USB 2 and is for your mouse. Apply power to the RPi 400. Fn F10 is the power on switch. It should boot into the USB 3 SSD. MAKE SURE there is no micro SD card installed. If you boot from USB, then the uSD connector must be empty.

I tried this but it didn’t work? I’ll try again as i didn’t have it plugged into the blue usb port.

Edit: Sorry I didn’t realize the TV i have it plugged into HDMI with turn off on me.

It seems to be booting now.

Edit: It does boot a lot slower than i was expecting also. It does work very well on Raspberry Pi OS so I’m hoping it works as well on Eos Arm. Sound is working through the Hdmi cable and i also ordered a usb audio adapter. They also now have DACBerry 400s and DACBerry 400M sound chip to mount on the Pi400 pins.

Let us know how your Gnome install works.

Is that the best? I was hoping KDE or Xfce. Which desktop works the best?

Which desktop works the best?

on the Pi, its MATE or LXQt for me

Okay bad news. I got a kernel panic when it was loading?

Out of my bandwidth/capabilities/expertise. I leave you in the capable hand of @Pudge

I was hoping KDE or Xfce. Which desktop works the best?

KDE on a USB 3 external SSD works quite well. KDE is what I use on my RPi 4b with 4 GB RAM for my development setup.

Don’t get hung up on memory. Out of necessity, Arm devices are much better than x86_64 machines on RAM management.

Okay well i got a kernel panic and it quit. So i moved the SSD to the third port which is blue and trying to boot again.

Describe your SSD. Is this a USB Thumb drive? A 2.5 inch SATA SSD in a USB 3 external enclosure?

Edit: I use it all the time.

Could i boot on a live usb and then image another usb to boot from if this decides not to work?
Edit: It’s still booting…seems to take a while?

Edit2: I’m seeing a lot of failed messages? Is this normal?

@Pudge
At this point it is not connected to a network so it can’t do a lot of the things it’s trying to do.

Edit: Currently it’s got a flashing cursor at the bottom of the screen under Failed to start Update is Completed.

The 2.5 inch SSD in an USB enclosure should work fine.

Were you successful in booting into the RPi 4 and bringing up a new Calamares window that works like the live ISO Calamares. This is where you enter your time zone, language, user name, host name, passwords, etc.

At this point it is not connected to a network so it can’t do a lot of the things it’s trying to do.

The first boot on the RPi 4 is totally dependent on an internet connection. The first boot is critical for performing the rest of the install.

My suggestion is Start at the beginning on the x86_64 live ISO, and re-install to your SSD. Then when the RPi 400 is connected to the internet, boot up the RPi 400 on the USB SSD.