I found nothing regarding currently delayed kernels on the arch forums, but maybe there are some other channels that I don’t see with an explanation.

Its worrying that such essential packages are more or less ignored while in the last years, they usually were updated (at least on testing) on the same day that upstream released them.

Edit: He updated 2 other packages today, lets hope that kernels are also updated … False thought, he is the maintainer of those packages but did not do todays updates.

Well - my first thought is that the maintainer actually took a couple of days off…?

If things are usually quick, it is to be expected that a hold up has a good reason.

Kernels are security relevant, one person taking days off should not lead to them not being updated, especially on such a big project like arch.

Perhaps I have an oversupply of patience!

Or, I could be affected by having to wait for the zfs versions of the zen builds - often some days later…

You can always add the testing repo if you don’t want to wait until they are released from testing.

Kernels are security relevant, one person taking days off should not lead to them not being updated

My understanding of that is that if there is a vulnerability that warrants addressing someone would step-in. Not every kernel point release addresses important vulnerabilities. Are you aware of any critical vulnerabilities in that point series? 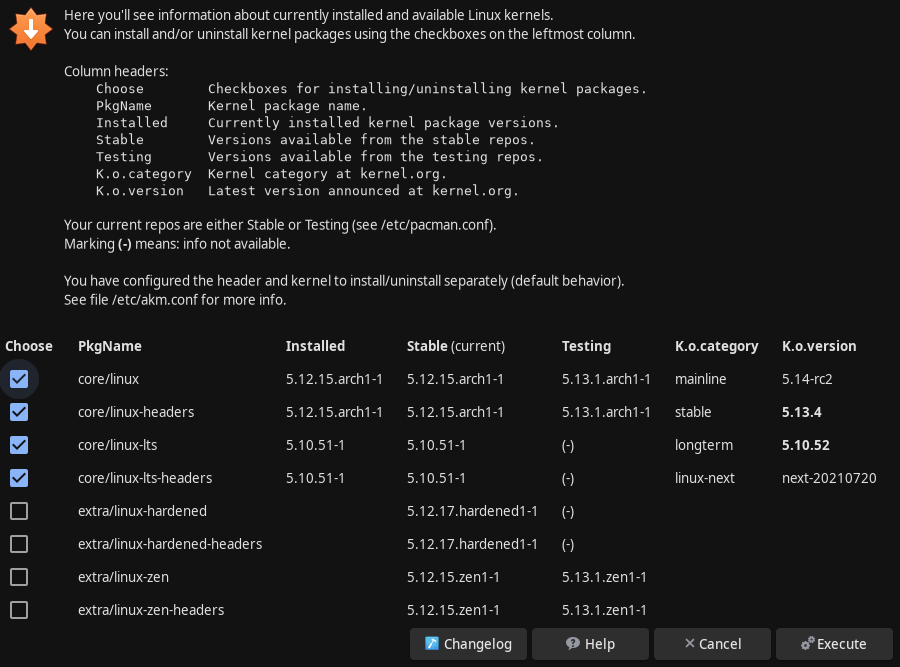 Good that they test the kernels properly.

I don’t know that every single point release is always put out? I thought sometimes they just move to the next kernel release if it’s that close and all is good?

testing repo if you don’t want to wait until they are released from testing.

I already am on testing. but like mentioned in the OP, even testing is 3 point releases behind …

I don’t know that every single point release is always put out? I thought sometimes they just move to the next kernel release if it’s that close and all is good?

of course when a new major series is released, they stop updates to the old one as soon as the new one is appearing in testing. That happened 10 days ago on July 10, already with a 13 day delay (5.13 was released on June 27). Since then, testing has missed 2 releases, 3 with todays release, and stable missed 3 releases, 4 with todays.
5.14 is at least 5 weeks away, so they really should not wait for that.

Edit: Just to make sure, I don’t blame heftig for not updating THE core package of the arch distribution. At this point, it is relatively obvious that he has some issues that prevent him from updating it. I blame the other Arch maintainers for not taking over, and wanted to know if there is any information that I missed that explains why they don’t update the kernel.

Sorry i missed that but if you are on testing then you’re already ahead.

Pushing kernel updates is not something to be rushed, unless there are known vulnerabilities that urgently need to be fixed.

I’m glad they are taking their time to thoroughly test everything.

Personally, I find this whining about not having the latest kernel version in the repos a bit silly. If they pushed the kernel updates sooner and caused systems to break, that would cause even more whining (probably from the same people). It’s “damned if you do and damned if you don’t.” I think Arch repo maintainers are doing a great work. Arch has a great combination of package freshness and system stability.

Arch has a great combination of package freshness and system stability.

a sign of live, someone else has taken over and updated the linux - kernel package. No sign of live on the linux-zen package though, but that’s ok.

about not having the latest kernel version in the repos a bit silly.

I am sorry for taking the arch promise by the word:

Simply ignoring kernel releases for weeks is not bleeding edge. I would totally be on your side if they would have updated testing regularly, and decided that it is not yet ready for stable. But they have not done anything with those kernel releases in testing (or staging) either.

Yeah, I see your point. You should definitely ask for a refund, you’re probably entitled to one.

Kernels are starting to move again, linux=5.13.4 is in testing.

You could just donate to EndeavourOS then.

We aren’t perfect but we try our best. It’s also more fun on the Purple side!

Usually a delay means there’s issues with the kernel. I’m happy that it’s well tested before being pushed to the general populace.

I’ve never seen Manjaro being ahead with a kernel on stable. Curious times.