Why two separate authentications to mount an external USB disk?

This redundancy has been occurring after startup since I switched to EndeavorOS. It is a minor thing, but I am curious why two different processes (KDE Daemon and PolicyKit1/Udisks) both want to mount my external disk – to different locations. 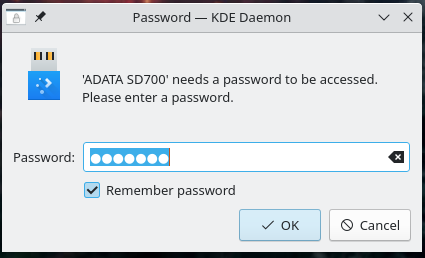 I am just making a guess, one of the prompts could because of an entry in fstab while the other is some sort of automount feature of KDE.
Is this disk encrypted? Are you unintentionally using two layers of encryption? Are these processes asking for drive unlock password or user password?

making a guess, one of the prompts could because of an entry in fstab while the other is some sort of automount feature of KDE.

No need to guess and nothing related to fstab.
Window titles explain:

Good ideas! I’ll check. So far, Yes, the disk is encrypted. 2 layers? Don’t think so, but I’ll look around. As for the last question, the security prompts happen in the order shown, after logging in to my user session. The first prompt makes sense, because the drive is encrypted and the prompt seems to be looking for user authentication to unlock the it. It is the next on that has me more puzzled. If I ignore it, I can still access the drive as a user. It seems to be doing something system-related at a lower level, but I don’t notice one minor implication.

In Konqueror, with the sidebar showing ‘places’, The first prompt creates a mounted disk under "Devices’, like a regular internal disk, but it becomes visible only after I enter my user password. The second prompt creates a disk under “Removable Devices”, with a visible and variable status, prior to getting the second prompt. It shows “You are not authorized to mount this device” in the KDE Disks & Devices notification as the second prompt appears. After I ignore this second prompt, The KDE D&D notification for the device changes to “Mount and open”. Clicking this opens the encrypted disk without needing any additional authorization.