What really annoys me about diy builds

on amd a4 mb’s in order to use the factory default wraith cooler i have to unscrew those mounting brackets and then that back plate falls down. I really hate that design. that plate should not be designed so that it falls out of place. on a mini itx build if you unscrew the wraith cooler to swap out a chip you have to disassemble all the stuffs and remove the motherboard so that you can access that bracket that has fallen out of place as there is no access panel like on even micro atx cases. this is truly a huge annoyance. can’t they just design a board where the bracket doesn’t fall out like that? what would it take? 2 screws to keep the bracket from falling down? how hard is that? BAH!

Bought a custom workstation from PC Specialist. Can’t change the SSD because I literally have no idea where it is.

I’ve looked all over. The thing has an M.2 SSD & a SATA SSD. I can find neither. I don’t want to start dismantling it to find them because the machine was ordered for my partner’s employer, & although I specc’d it up, I am not a company and do not have insurance. So unless it’s a trivial job, I’m not going to touch it.

the m.2 is likely on the underside of the mb if it’s not on top under a heat shield. cant speak of the ssd though

in this photo the heatshield is just above the pci slot 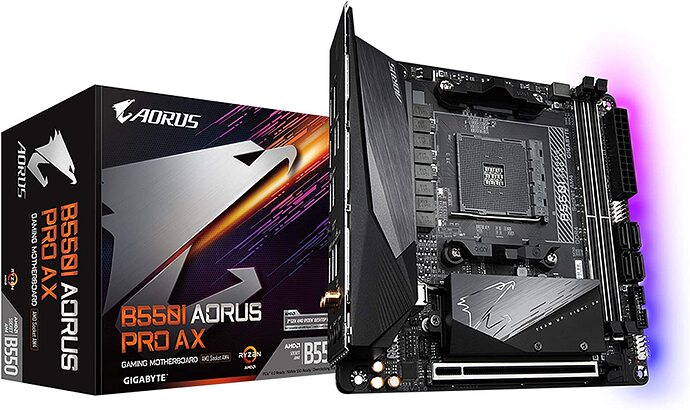 you take out two screws to get to the m.2

I’ve looked all over. The thing has an M.2 SSD & a SATA SSD. I can find neither.

For the SATA SSD, did you look behind the rear panel? For the m.2, it is probably like @LizziAS wrote, under a heat shield.

support should be your friend, right? a phone call with them should get you sorted I think, no?

For the SATA SSD, did you look behind the rear panel? For the m.2, it is probably like @LizziAS wrote, under a heat shield.

I couldn’t see any way of removing the rear panel the last time I checked.

support should be your friend, right? a phone call with them should get you sorted I think, no?

You’re right, but I was mainly lamenting over why it’s designed in such a way that makes it difficult to change these parts.

I couldn’t see any way of removing the rear panel the last time I checked.

Maybe rear is wrong word in this scenario. I was thinking of the one that is one the right if you are looking at the PC from the front. Basically, behind where the motherboard is.

Of course, I am assuming this a traditional PC tower. If it is something else, it would help to see a picture or know what kind of case it is.

That’s strange? I have used many many stock wraith coolers and never had to unscrew the mounting brackets.

I think you are mistaken

It’s possible he is mistaken, but it mirrors my AMD build experiences so far - with Stealth AND Wraith coolers. On stuff I’ve built, only Intel setups involve much bracketry…

Okay … I will admit that i am using a different factory cooler. You are using the one with the spring screws. I ask for forgiveness!

See now why can’t that backplate just remain in place for me. Is it so hard to have a screw or two to secure it so it doesn’t fall out?

I understand what you’re saying. Once the motherboard is installed it is hard to remove the cpu cooler without the backing plate falling out of position. I’m surprised they don’t have a way to mount the backing plate.

That’s what i’m saying! Where are these engineers making these mbs with a realy simple solution? or even an aftermarket hookup?

the backing plate could easily come it two parts

the first part just the backin plate with much shorter female screw holes and then the extenders that screw in with a wider base to hold the plate to the motherboard. even that would be better than what we have now…

A lot of after market coolers are like that. I’ve used some.

With the clips instead of screws?

I’ve used ones with screws. You mount the backing plates and they are permanent until you want to remove them.

Edit: In particular this one.

Cooler Master has revived the legendary Hyper 212 EVO with major improvements. Upgraded with an asymmetrical heat pipe design, it now provides 100% RAM clearance for guaranteed compatibility across motherboards. The cooler stature has been shortened...