What kernel do you use?

Typically when I install a distro I like to have two kernels installed, one current with the mainline kernel (as of writing that’s 5.13) and also one LTS kernel (as of writing 5.10), as a backup in case anything goes wrong with the mainline one. Now I noticed that the EndeavourOS team put together a lovely little application called akm also known as the “simple kernel manager” and it also shows two other kernel options to install, hardened and zen kernels respectively.

Question One: What is the purpose of the hardened and zen kernels are, is it even necessary I need to install them or is sticking with the mainline and LTS kernels just fine enough for now, please do let me know.

Question Two: I’d also love to what what everyone’s kernel of choice is to get a healthy discussion going, so please feel free to show/share what kernel you prefer to run and why!

Below is a quick screenshot to show off the akm application that helps you to install/remove some kernels easily in EndeavourOS! 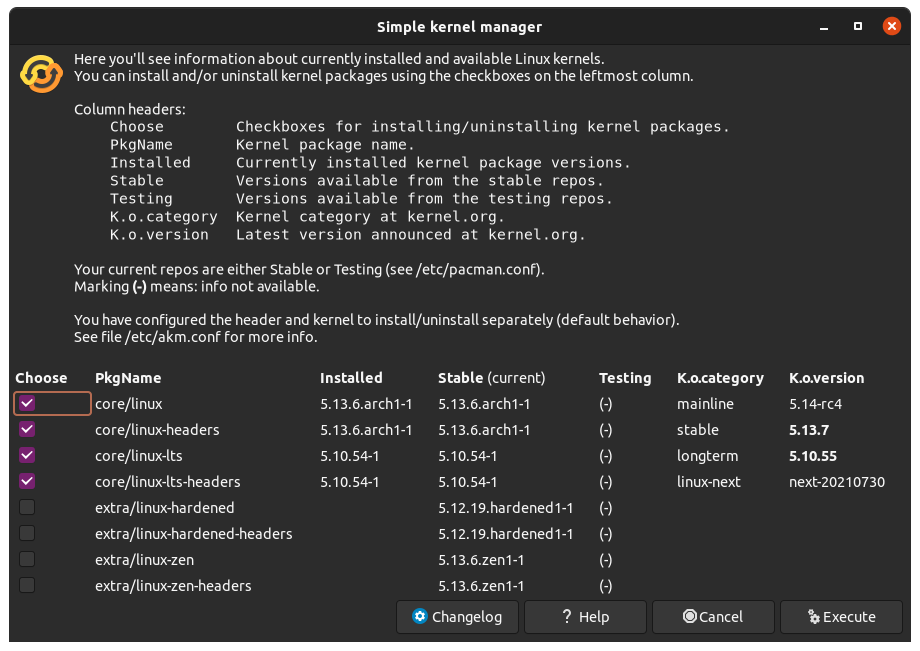 Edit: Forgot to mention I have an Acer Aspire model E5-576G-5762 laptop if that’s worth mentioning in regards to my question about the hardened and zen kernels

I use LTS almost all the time. I keep mainline installed, and also Zen, just for a couple of games that run slightly better on it.

LTS, except when i have cutting edge hardware on hand which doesn’t function properly on LTS yet

Unless you have a specific reason not to, I always recommend using the LTS kernel. It is much less prone to breakages. Arch usually gets new mainline kernels very soon after initial release so there are often issues/conflicts with certain hardware.

Question One: What is the purpose of the hardened and zen kernels are, is it even necessary I need to install them or is sticking with the mainline and LTS kernels just fine enough for now, please do let me know.

The zen kernel has some different options enabled than the mainline/lts kernels do. Generally speaking, they are intended to improve responsiveness/performance. People have mixed success with zen so it is something you would need to try for yourself.

The hardened kernel is more locked down from a security perspective. However, the additional security comes at the cost of functionality and convenience so, again, it depends on your personal needs.

I use the hardened kernel.

I just use the current kernel. Don’t use the lts. Sometimes i use zen.

I typically have 3 loaded - standard, zen and lts. Normally I am on zen - I think of it as free extra performance (however slight) without a detectable downside. Plus, ZFS with zen is somehow satisfying!

The other are just there ‘because’ and ‘in case’ - and I haven’t needed them in years. I suspect that it works the same way as carrying an umbrella often does - if you are prepared, it doesn’t happen!

Mainline and LTS as a backup.

I use zen and lqx.

Thank you for reminding me of that one! I am having issues with zen and my 6700XT at the moment. I will try that one tonight.

As I have relatively new hardware, I usually tend to stick to the latest kernel with the zen patches. I don’t mind breakages, they’re fun!

Current Arch as primary and LTS in case I need to boot into it to fix something/downgrade something. I haven’t had to boot into LTS in about 6 months or so.

Haven’t had a single issue since install and the performance difference is noticeable, it’s not huge tho.

Mainline & LTS, although I usually boot the mainline kernel because it is auto-selected on systemd-boot. May switch to zen though if anbox gets mature enough

Do you know how to set which kernel you want to be the default on boot? Right now I generally use the 5.13 mainline kernel since it works just fine on my laptop, but I always have to scroll down to select it first before booting up. The LTS kernel is always selected by default for me, but I wouldn’t mind knowing the command(s) for how to switch between setting one or the other to be the default on boot if you happen to know how, that’d be awesome

where 0 would be first entry

I’m guessing you make use of grub for booting - if so there are 2 ways of achieveing that result. One is to set it to save last used as a default - and the other is to set the default to a numeric value corresponding to your choice. Either way, the highlight will be on your preferred choice at boot.

I don’t use grub myself anymore, so I can’t give guaranteed details beyond that it requires editing the file /etc/default/grub, which is fairly well commented for clarity…
BTW - I think I remember that the count starts at 0 for choosing which line to default to…