What is the source of income of maintainers of Linux distros?

I am just curious. I run yay everyday & sometimes multiple times a day & install the available updates. So there must be a group of individuals who devote their time on a daily basis. Correct ? Now Ubuntu is supported by Canonical but Arch is purely a community supported distro. So my question is people who are sitting in front of their computers and releasing all these updates, what is their source of income ? Are these people doctors, engineers who support Arch in their spare time ?

I think I know why only these two professions were mentioned

Part time devs have their day jobs. Arch in specific runs on donations, and afaik, nobody who contributed to Arch has a single penny going into their pockets.

There are package maintainers who push out updates. For Arch, they are called Trusted Users. They manage the repo packages. For AUR, its random individuals pushing out updates. 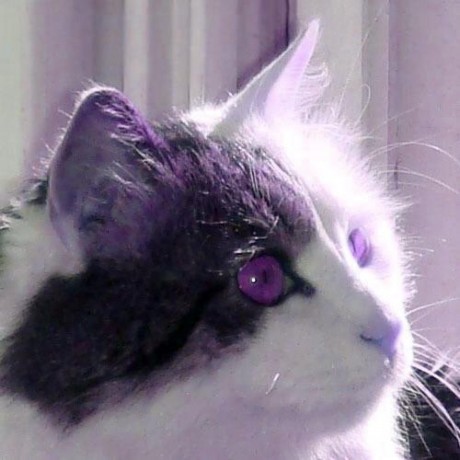 Is it not possible for Arch to do what Redhat is doing. I mean offer paid support for the corporate & still maintaining a free to use release

This isn’t on their agenda as of now. (And probably won’t be in the near future) Having professional support will require full time employees and that will cost more money. There was a relevant thread, but I’m not sure if it will really answer you

I read this and I am glad I decided to move to Linux not Windows. First idea that came to my mind after this “When you do not believe in your own product” Last summer when I was thinking about moving fully from Apple after M1 announcement, talked to few team mates at worked who switched to windows (now after w11 they are all moving to Linux) I considered the idea or “entertained” the idea of moving to windows, but never did and I am happy for it I work in software development industry data s…

Or is it not possible to use Arch in a corporate environment due to its bleeding edge nature ?

So, I am going to take a different perspective and tell you something you probably don’t want to hear. For most business use cases, a broad rollout of a rolling distro is a terrible idea. There are a bunch of reasons for this: On a rolling distro you are often forced to upgrade applications. This may cause problems in a business environment, either because you need to hold software back or because the lack of predictability around it will frustrate your user base. In some cases, application…

That will open a new source of income & the free version will also coexist.

Yeah in theory they could do, but they don’t have plans to do so.
Plus, as a user, I won’t use Arch at an office, even though its the only distro I like for my personal hardware.

Manjaro has a corporate side and a couple of full-time employees. They have tie with several firms,think they got $10 for evey pinephone that shipped with manjaro and several pinebooks ship with manjaro pre installed. AFAIK its the only arch based distro with corporate intentions

Or is it not possible to use Arch in a corporate environment due to its bleeding edge nature ?

Much better to use something like Fedora or Debian in a corporate environment if their users will be using Linux for whatever reason. Stable, unchanging software is preferred there for obvious reasons, which don’t apply to most Arch users with personal devices like ourselves.

Win10 works in a corporate environment because it’s easy to use for desktop plebs, requires no intervention on their part to update thanks to centralised update deployments via MECM, and application compatibility is of paramount importance.

I’m an MECM engineer in work, and I would not want to use anything else for a corporate environment because Win10 does everything we need as a company, and we can control monthly patch rollouts and yearly OS upgrades via MECM which has minimal impact on users, especially when most of them are still currently working from home (and also 90% are completely clueless when it comes to computers).

I have also always thought a lot on this issue. Donations are likely to play a big role in open source software communities, see Linux Mint, for example.

Some plebs in our corporate environment would disagree.

application compatibility is of paramount importance

That is true but sometimes it goes too far to keep everything compatible that we have to use a lot of legacy and outdated software. I would not believe it but a few months back we had an issue that some software broke because windows update disabled a flash player.

That thing should have been killed a severaly years ago.
And on the other side I hear from our management how we have to develop cutting edge technology to be ahead of our competiton on the market.

Some plebs in our corporate environment would disagree.

Oh I know, believe me I know

And yeah, “legacy” apps are a pita. We have software installs that are, and I kid you not, 20+ years old, because the software was never updated and it does something no other software does exactly. Which is a pain

That cat belongs on EndeavourOS. It’s got the purple going on!

Arch runs on donations and a bunch of people who for whatever reason get joy out of knowing and building something together.

For seriousness. I’m not even a developer and being over 3000 miles from where I was born (think Lisbon Portugal to Moscow Russia distance) it gives me a bit if community i don’t get a lot of in day to day life.

It’s great to be apart of something, especially something as successful as Arch. Building something great takes passion. Building something for profit takes a someone in charge that can direct a team. That’s the difference between the Mets and the Yankees. Or a Toyota and a Ferrari. Or. . . Whatever analogy you want.

If you want to donate to them, they will accept it but that’s likely not the point. Many would (and do) do it for nothing .

Linux would need offline and automated updates, authenticated by some secure key that can be set up by the user and remains valid for some time, also periodical iso rollouts, which are capable to repair a broken system, onboard backup systems as well as human oriented log reports. That way it would be better than Windows, even for corporate use, also these features could be sold as service features by a distro that has to be a rolling distro then, otherwise it is needles to try BUT HAVE TO ADMIT I HAVE NO IDEA ABOUT THE LICENSING PART…

So my question is people who are sitting in front of their computers and releasing all these updates, what is their source of income ? Are these people doctors, engineers who support Arch in their spare time ?

I can only speak for myself.

I am a former business owner - early retirement - so my income is my monthly pension and my wife’s income from her daytime job - which is 30h/week.

Besides contributing to Linux community in various ways - I also do software development and maintenance for my oldest client - which also happens to be a long time friend going back to early 1980’ies.

The outcome of this pays for my obsession with hardware.

Many contributors to the Linux community either do this as a part of their work or as part of enlightent self-interest - they are actually using the software they are contributing to.

This isn’t on their agenda as of now. (And probably won’t be in the near future) Having professional support will require full time employees and that will cost more money. There was a relevant thread, but I’m not sure if it will really answer you

My team decided to go with the Suse Linux company and few cloud services from Red Hat for CRM. Thank you all for your time, advice and valuable feedback. Best Part about the endeavouros is the wonderful and helpful community, kudos to all. Wishing you all a good day and a wonderful week ahead. Regards, Alex. 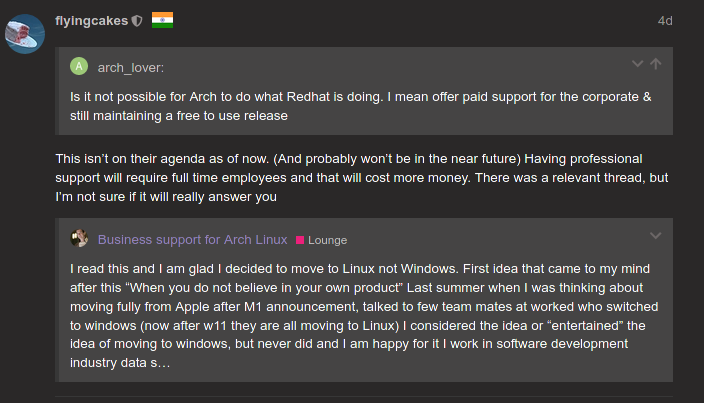 automated updates are easy to do with linux if you want but that has really nothing to do with why corporate environment wouldn’t be wise to rollout a rolling release distro like Arch to every system.

Even when you automate package upgrades it would at somepoint cause a problem somewhere and would maybe need a fixed package or a lot of manual work to get to a working system. Multiply that for a big corporate business and the amount of workstations they have and you get the idea how much work that would but on the IT dep.

Hence I think these LTS versions of Ubuntu etc are way better option for someone who would want to roll it to their environment.

And not just the hardware and installation part, it would take n+1 gurus to support that kind of amount of workstation with a rolling release distro.

but this is exactly what Microsoft does. Easy maintainable automated and rolling updates. That is the only way corporate can go. Definitely no Ubuntu LTS like rollovers, nobody would want to do that.

well with windows the admins can control very easily that updates don’t get installed until they are tested.

But sometimes with Arch for example some packages if not upgraded when another package needing that package gets pushed might break something. That is just my opinion for my experience with rolling release distros. You shouldn’t hold back updates too much.

In our corporate environment we get big Windows OS updates maybe 6-9months after they have been originally released, i would guess with that kind of timeframe a rolling release Linux distro would break.

what I wanted to say, opensource is good as it is, we should leave it like that, I do not want to change Arch or so,just wanted to specificate features of a Linux distro, which would want to sell those features
namely

**offline and automated updates** , authenticated by some secure key that can be set up by the user and remains valid for some time, also **periodical iso rollouts,**

like Mandrake tried back in the 90 but did not bring on those features, for real