Unable to extend monitor to the left

I have a 3060 running a dual monitor setup. one is a 24 inch vga monitor being driven by a hdmi to vga adapter at a resolution of 1900x1200. It is PHYSICALLY to the left of my main monitor, a 27 inch 1440p monitor being driven by a displayport. On bootup, my computer sets up the VGA monitor as being to the right of the display port monitor, the opposite of how it is physically arranged. When I go to change this either through xrandr or the display gui, both displays break, i.e the cursors actual position, i.e where the clicks occur, is different from where the cursor displays itself, black bars appear at random positions on the edges of the screen, and nothing can be interacted with. Sometimes, the displays also begin to mirror each other.

EDIT because I posted the wrong xrandr output

Did you not install the nvidia drivers? The open source drivers (nouveau) are loaded and the monitor shows it’s running on mesa.

Well, I just did that, and now the system wont boot. It gets to grub, shows my linux linux, selects that, and then… nothing. The startup text shows up a little, but after that, blank screen nothing. no signal. Should I open a new issue for this, or do you have any idea what could cause this? thank you

What did you do exactly? Installed the nvidia drivers?

Yeah. I installed the nvidia drivers with pacman -S nvidia. thats it. Rebooted after that and now were here

You used sudo i assume?

Edit: Are you able to switch to a tty?

If you can switch to a tty can you post

What’s the DE? Most have simple display setting for things like this? 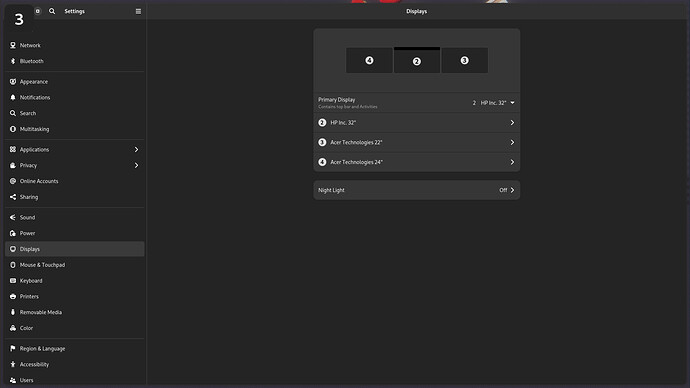 The original install was xfce. I didnt have any sensitive data on this machine, so im assuming im gonna have to reinstall. When I do, should I use a different DE. This was done with the offline install for speed, but i could do online if need be. Thank you!

You should use whatever you want. I just happen to like GNOME these days. (I’ve had long term use with Cinnamon, KDE and xfce+i3 over the years though)

This is my first time using a de in a long time, im coming from i3 on debian cause I recently got back into gaming and thats really not something i3 is good at. Maybe Ill give gnome a try. Do you think thatll solve the problem? Thanks

If you used the offline install did you totally update it after?

Edit: It’s better off to use the online install if you are going to re-install. Personally i would recommend updating your Bios as there are 5 updates newer.

I have no idea what is causing your issue, therefore I can’t fathom what would solve the problem . . . But, pretty much every DE has a simple setup that lets you change the positions of the monitors.

If you’re interested in gaming - I personally like GNOME. The reality is most people use Ubuntu or Fedora, both of which use GNOME and both of which run wayland by default. . . Is that good for gaming? I don’t really know, but I’ve had a great experience so far.

I turned on the internet. I used the offline install cause I figured id try xfce and that was available thru the offline one

Thank you! IM going to try that rn

Ive never updated my bios before. Do I need another cputo do that, or is that only to regress updates? Anything else I should be aware of?

I just wanted to ask where you have the one monitor hooked to. The one that is Display Port is hooked to the Nvidia card. Is the other one also hooked to the nvidia card on HDMI?

Yup. Its an old monitor that only has a vga in, so its hooked up to the nvidia card with an hdmi to vga cabls

Is your motherboard Bios or UEFI?