Here is a little terminal-centric emoji picker that I came up with. I’ve been using it for a couple of days and I really like it.

To make it working, you’ll need to install xclip and fzf.

Add this to your .bashrc or .zshrc:

where ~/bin/emoji-list.txt is a path to a file with all the emojis and their description (adjust if necessary). Here is what I have in this file:

Now, when you want to use an emoji just type:

will be copied to your clipboard. Just paste it where needed.

If you don’t specify an argument, it launches an interactive search with fzf.

It works flawlessly, but if you figure out how to make it even better, post about it here.

EndeavourOS, out of the box, does not come with colourful TTF emojis installed. For example, KDE’s Emoji Selector application displays a bunch of □-like characters instead of emojis. However, it is fairly easy get it working. While I’m sure most users already know how to do this, just in case there is a newbie looking for a simple tutorial, I hope this helps. First, install an emoji font. A good choice is noto-fonts-emoji from the repos, but if you want the same look of emojis as here on Disco…

Did you try it on bash?

EDIT: the following seems to work on bash and zsh (but not as slick source as your version):

Good catch, haven’t even considered that Bash does not support substring of a command substitution. Lame

Your ${line:0:4} will not work in Bash the same was as it works in Zsh. I’ve edited the post with the correct version.

Here it worked, but it is a good idea to use “%s”.
What exactly did not work?

both in Zsh and Bash. You’ll find different results. Not all emojis are equally long in byte count. It’s the ${_STR%% *} that does the trick.

Yes, it is. With printf always use '%s'. Consider this script:

Yeah, removing the suffix solves the mystery with the emojis.
Nice script BTW.

The only thing that is bothering me is the abuse of cat… I have replaced it with redirection:

It displays incorrectly in the terminal though, as: “

Yeah, I have some trouble with it too…

But if you paste it in a text editor (tried with Kate), or here in the browser, it’s correct.

On emacs it pastes the icon and a big space…

That’s correct. I guess it’s a problem with Emacs. 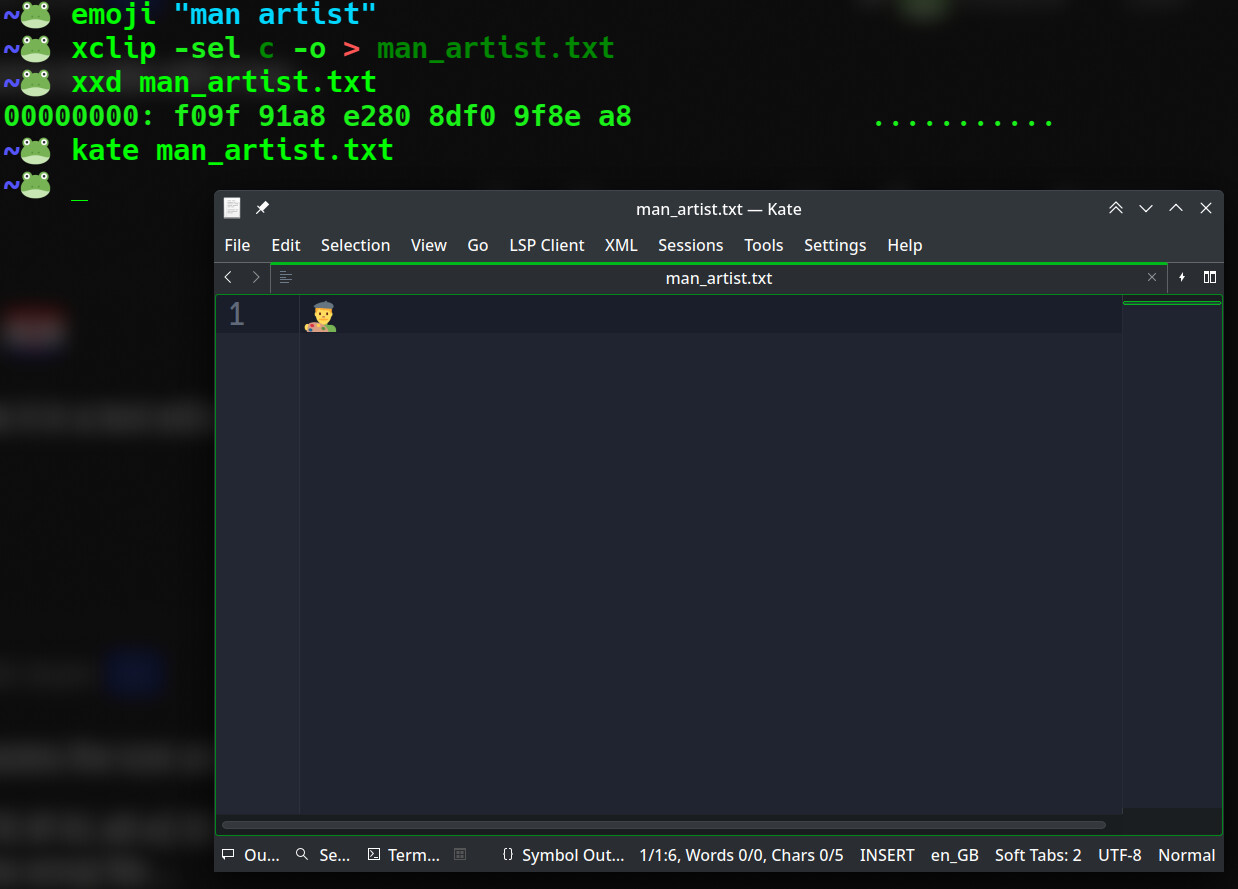 Oh, now I realise that those quotation marks are annoying to type. Edited the OP, now it should allow simply:

Also replaced grep with fzf since I’m using it anyway, so now you can get away with minor typos:

Did you try command

takes care of it and only copies the first emoji.

Why would I ever - on God’s earth - be wanting to use emojis in a shell? - Beats me.

Sending hearts to my installed kernel?!

Ya right, this must be it!

Any hints to an un-initiated me are (more than) welcome.

It must be something behind closed doors, I guess?!

Say you’re writing something in a text editor or in a word processor and you want to use emojis in that text… Or you want to use emojis in an email, or in a YouTube comment, or a Reddit post, or some forum that doesn’t have a nice emoji picker like Discourse… An easy way to get emojis is to use an emoji picker, a program that let’s you pick an emoji which it copies into the clipboard so you can paste it wherever you want. With this little script, your shell is now the perfect emoji picker. No need for clumsy GUI programs like KDE Emoji Selector or, even worse, some obscure extension for ɢɴᴏᴍᴇ. Very fitting for a terminal-centric distro like EndeavourOS.

Those are normal emoji uses, but it can also get quite weird:

You can use emojis in filenames, POSIX filesystems will let you do that, but whether that’s a good idea is another thing…

A good C++ compiler, like GCC will let you use emojis in identifiers, like variable names (but that won’t work in Clang).

Again, maybe not the best idea, but certainly possible!

You could also use emojis in a shell, as well. For example, a perfect alias is:

emoji as my Zsh prompt, much nicer than that boring old $ sign!

The possibilities are endless, the only limit is one’s lack of imagination.