Hi, I’m new with Endeavours, I came from Manjaro Testing branch (their gurus don’t want use snapper, for my opinion) and with Arcolinux (they have snapper during install) but this is a confusing distro for me,

but I may say that I’m in love with this EOS.

After a fresh install of Endeavouros with gnome DE, I’ve installed snapper as follow (following a tutorial found here for a post install with gnome DE):

snapper-support will automatically install snapper, grub-btrfs, snap-pac from official Arch repos and configure Snapper for you, and the BTRFS Assistant is a GUI Tool made by r/GarudaLinux team by which you can easily manage and restore your Snapshots and BTRFS Subvolumes. grub-btrfs will enable accessing Snapshots from GRUB Menu.

I’ve NOT made any changes to volume that are automatically created by Endeavour with a BTRFS file system during the installation.

I would like to know if this procedure is correct or if I must change something else, I’ve made a couple of test all has worked good

There are older threads will discuss snapper-support. Maybe they are helpful

If you want everything setup for you, you can install snapper-support and btrfs-assistant. This will probably remove timeshift but you can always reinstall it again if you want to switch back. The alternative is to set everything up manually which is a bit of effort.

Hello! I’m new to endeavour os/arch in general and i was looking to use snapper before i need it via garuda linux’s snapper-support https://aur.archlinux.org/packages/snapper-support/ It seems to be making snapshots and i can see the snapshots in the grub menu but i’m unable to navigate to a snapshot and load it. It hangs on a blank screen with the “loading 250-4 arch” text. Has anyone had any success with snapper-support and can help me debug this?

You can also search for snapper-support using the forum search bar.

I would like to know if this procedure is correct or if I must change something else, I’ve made a couple of test all has worked good

There is no absolute answer to that. It depends what the goal you want to achieve is.

There is also a procedure on the EOS wiki for using TImeshift, which accomplishes a similar task to snapper.

Well, I’ve made a final test, updated system with 86 new packager
then restored previous snap (before update) and I’ve found the a previous system again with 86 package to update and all works good. 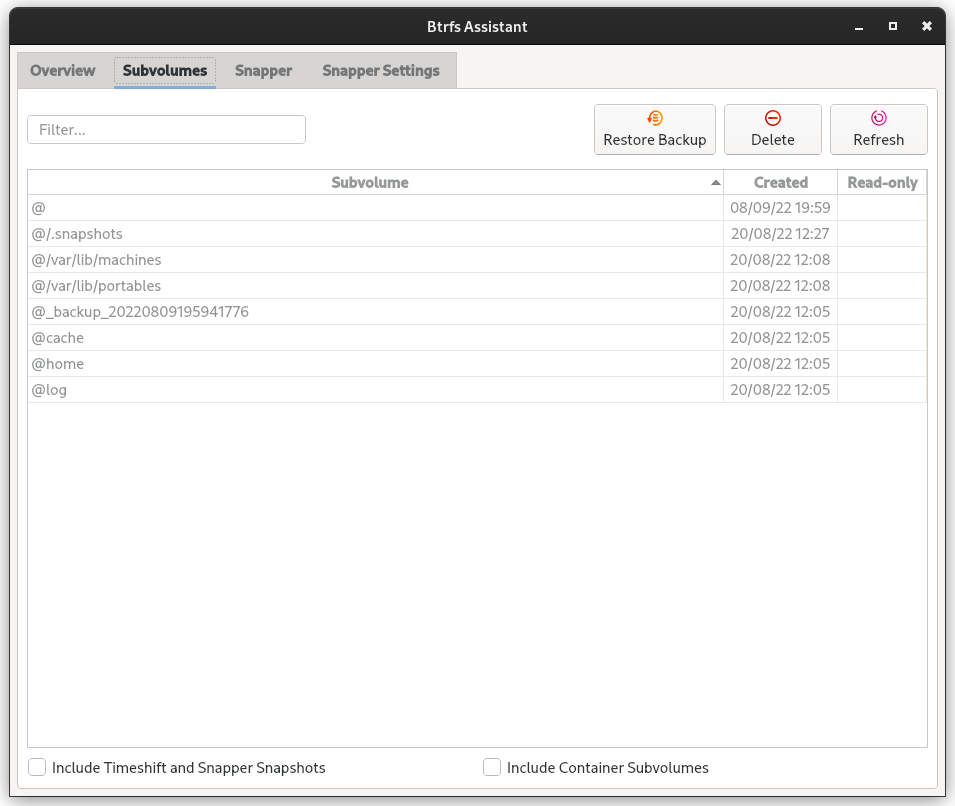 So I think that is normal

That is the backup it takes before doing the restore, you can delete that if you don’t need it.

Thank you, so at this point I may say that all work perfect and I’m so happy about that. 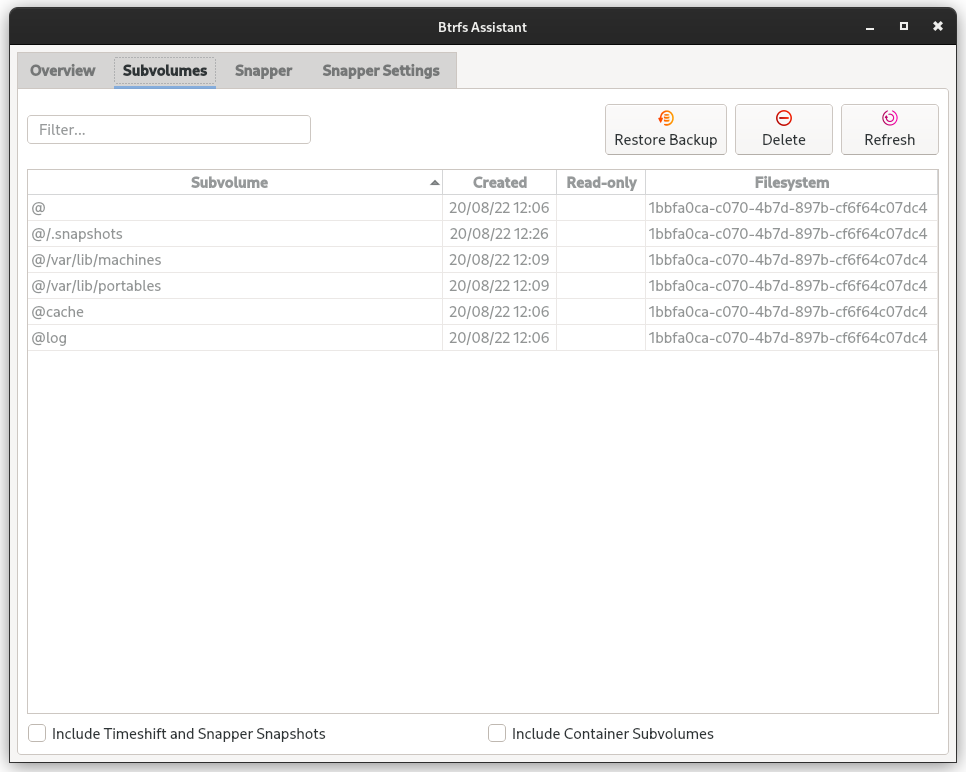 also on this laptop, I’ve made standard installation with btrfs but I’ve choosen on first hd just /boot/efi and /root
on second hd I’ve created as mounting point /home
the two disks are in btrfs

my question is:
should I create necessary subvolume @home or the configuration is ok?

should I create necessary subvolume @home or the configuration is ok?

You don’t need a subvolume called @home, it is fine either way.

Thank you Dalto, so I will leave all as it is.