I notice that some people do put Linux on Apple hardware but I am not exactly sure why. It seems to me that you could always run a mac on the command line which is Posix compliant (or close to it I guess). It seems to me that once you have bought into Mac-world (and the price is premium to do so) then you are better off to stick with the consistency of that world. Finally, Apple hardware may be cool and there is status pulling out an apple laptop in public but it is not that robust and one could probably buy a Linux compatible PC that would be more powerful and physically stronger and more upgradable than an Apple one for the same money.

I understand this topic can be inflammatory but I just want to know why some people do that without stoking fire.

I can assume that some people like aesthetics of hardware, but hate proprietary invasive garbage of OS

Sooner or later all older mac devices stop getting system updates… (Like my Mac mini from late 2012)
While the devices themselves are still perfectly fine, from a security standpoint this may be less fine…
not to mention some software might require an OS version newer than the one currently on the device…

Instead of throwing a perfectly working computer out the door, installing linux on it seems like a logical decision then

Some prefer mac hardware - This was much more common back in the days when apple made laptops with build quality, hardware and usability that the competition didn’t match.

Back when IBM actually made the computers themselves, they could match Apple easily in quality. However they had someone who usually designed shipping containers doing the design of it

there is status pulling out an apple laptop in public

Maybe in the days of PPC-based Macs.

Yes, it may say something about the user, but not necessarily something positive in my eyes. At least, if he only thinks he can represent something by buying/owning some hardware.

Hardly anyone will buy a Mac to use something other than macOS (Linux will be thought of when there are no more macOS updates). At least so far.

I’d buy an AS-based MB if it was assured that Linux would run natively, w/o macOS. Because and as long as there are no other viable ARM-based notebooks.

That’s exactly why I installed Linux on my Mac.
I also know better now than throwing hard earned cash at Apple…

Found another reason… this discussion made me curious about putting linux on the mac mini…
my mac mini’s hdmi port is limited to an output of 1920x1080 (which wasn’t unreasonable back in 2012), which resulted in black bars on the sides when I connected my ultrawide monitor…

After searching online I saw a few apple forum posts that mentioned that an active DisplayPort to HDMI adapter could help, since the DP on the mac mini allows for higher resolutions.

bought the adapter, booted into OSX, only to be met with the same black bars, and no way to increase my resolution above 1920x1080…

A few moments ago I popped in my install usb for EndeavourOS… Well I guess the screenshot speaks for itself… Whereas Apple limits the functionality of it’s device through software, linux opens it all up…
I get the full resolution of my monitor now

My first Linux install was on a Mac, and it the time it was all I had. The choice was “get it working” or “don’t use Linux”. I chose the former.

Here’s an easy way to try Linux on a Mac: Install Refit (32-bit) or Refind (64-bit) on your old mac (details available online). Then install a Linux Distro that boots from a USB and loads into RAM like Puppy or indeed many others nowadays. Just boot from the USB and see how your Mac responds. You can keep your mac as it is but still have fun with Linux. OK, not the full install but still fun. As for full installs, I’ve found some distros won’t work while others do.

Don’t forget family members as a reason for linux on Mac hardware. We have a family computer that we share for some things. I run Apple & Linux, one son runs Linux only, another Mac only, wife Mac only. On intel Macs, you can install Qemu on Mac and run Linux within MacOS at essentially bare metal speeds as Qemu uses Apple’s Hyperkit hypervisor. Not sure it that is possible yet on the Apple Arm silicon.

You can thus have the best of both OS, so the fam can use MacOs and I or my son can use Linux without rebooting. Of course, if you don’t mind rebooting, Linux installs well on most modern Macs using Refind in a dual boot config so you can boot into either.

If I was ever dumb enough to buy a Crapple product, I’d definitely put Linux on it

No. 1 reason why I would want to put Linux on any hardware is that I want to be the owner of my computers. Linux is the only OS that does not try to take away ownership of my hardware from me, while still meeting my computing demands.

It’s not that I like Linux (I guess I do, it’s not terrible or anything), but I really hate proprietary OSs that limit my freedom to use my computer as I want, and I especially hate the fact they try to phone home without my permission, which is downright treasonous.

Agreed. My MacBook is only really there for some software (old and mainly non-apple) that is still very good and useful that I still cherish and find useful. I use Little Snitch. It’s a piece of software that stops it phoning home from anywhere. It’s 100% effective. The Linux world and the Windows world have tried to replicate it but so far, to my limited knowledge, nothing stable has been achieved. Unless you’re running Windows or perhaps some Canonical guff it’s probably not needed anyway. My Apple gear is over 10 years old. It still works but it neither “phones home” or receives updates. One day it will conk out but until then…

OpenSnitch looks promising, haven’t tried it out yet. 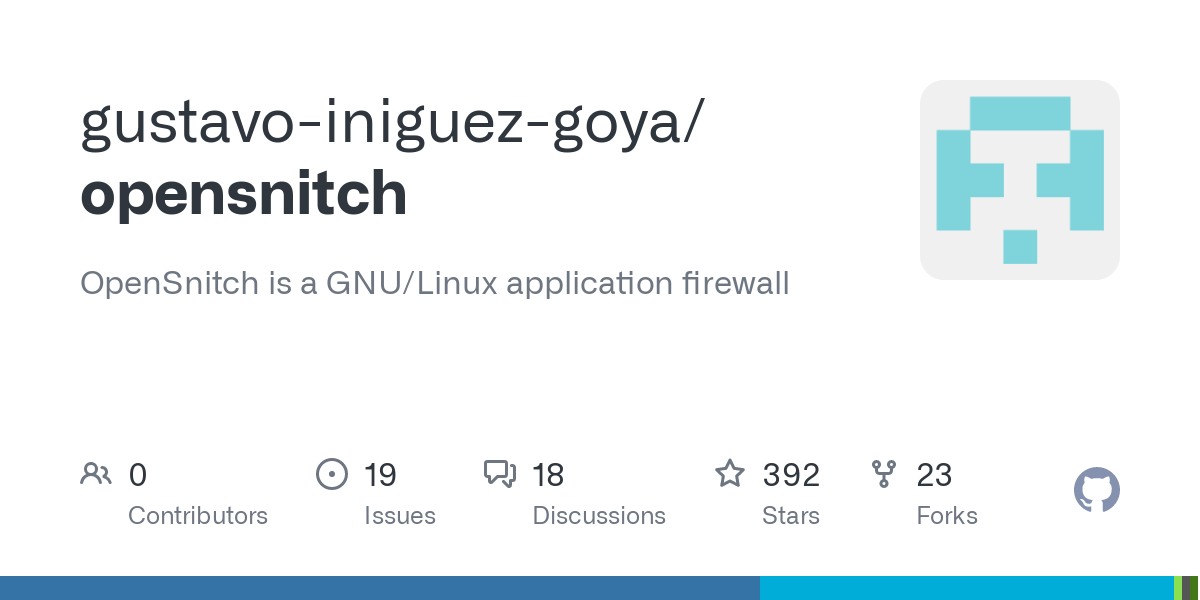 GitHub - gustavo-iniguez-goya/opensnitch: OpenSnitch is a GNU/Linux...

OpenSnitch is a GNU/Linux application firewall. Contribute to gustavo-iniguez-goya/opensnitch development by creating an account on GitHub.

It’s in the AUR: https://aur.archlinux.org/packages/opensnitch-git/

Yeah, promising but still not really ready. It’s been a long time in the making, I don’t know why, I’m not a coder so my knowledge is limited. I tried it a few years back but it didn’t work or be stable. It’s something I remain interested in it though. Privacy is important, it’s a basic right. If it works I’ll use it. Until then I’ll try to stop telemetry. For those who may be listening: I’ve got nothing to hide, I just resent the intrusion.

Macbook is a special hardware that’s made to run Mac OS and nothing else. If anyone runs any other OS on it, certain Macbook related hardware parts don’t work as they should (for Mac OS), for example the touchpad. Mac OS has certain apps that don’t run in any other OSs. There’s really no real reason to spend a lot of money to buy a specially-made hardware and put another OS in it. Much better to buy a laptop that comes with Windows and dual boot Linux - it costs less, better usability, lot of people uses them so help is available. Windows that came with it at practically no cost, you can clean install a Linux distro, if you don’t want Windows and so on. You can dual boot Linux with Mac OS in a Mac, only if you had bought the Macbook to run Mac OS mainly, otherwise a waste of money.

I have a 2011 macbook pro and used macOS on it until a year and a half ago. Then I found Linux and… it was just much much faster with any Linux that I threw at it than with macOS (be it macOS the allowed latest version for the “old” hardware or the latest patched version). With endeavourOS, it’s still my main work machine and I still found no need to buy another one to replace it.

another thing is, Macs hardware is so locked up noting can’t be use… unless you can find that config or something to make it work…

Macs it self is the best thing to have… Built great and does not act to cheap for us Mac users. I kinda wish we can run Mac apps on linux

also post note: I found out that Mac OS does run on FreeBSD which I did not know about lol which is a linux type, now only if there a way to run iMessage and FaceTime somehow would be great…