I cannot select the to my speakers

How can I create a profile/sink that will allow me to use the stereo jacks only?

I tried following this guide but unsure what to do

I assume this is pretty complex audio interface for pro audio, since it’s Komplete…
So i don’t advice to use pulseaudio, it’s just not capable. 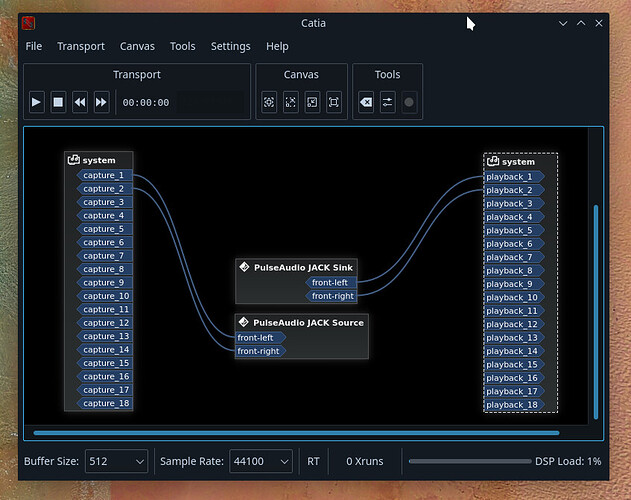 Launch Cadence and do it’s most basic settings (to route all audio through JACK):

Smaller buffer size - obviously smaller will be latency, but if you just listen and don’t create music - it should be safe starting value (although outcome heavily depends on Audio hardware, usually you should aim for as small value as possible, which doesn’t introduce crackles / xruns)

For best performance, you should also do that:

I got both speakers working with your Jack2 setup + Catia

I had the audio interface for months and spent 6 hours trying to get the thing to work in Pulseaudio and went insane. This post wa a last ditch effort…

I’ll check out that real time scan later on

Wonder how complicated it will mutliply applications and devices. I need to use a headset for work but I guess I can route that with Catia

It’s all about knowledge!
I’ve known about jack for a looong time before actually switching to Linux, it’s well known for extremely low latency abilities and routing capabilities matched to none other

There is also some ongoing effort to make defaults on Linux little more sane, by replacing pulseaudio with new thing called pipewire, which has cleaner code, better performance, no complicated settings hassle and is a bit of a compromise between normal needs / pro-audio…

But i doubt it will get any close to jack very soon, so there is that

Wonder how complicated it will mutliply applications and devices. I need to use a headset for work but I guess I can route that with Catia

Not much really, just in your DAW or audio application choose jack audio output, if it’s capable, if not choose alsa / pulseaduio, with that settings i’ve provided you - they all route to jack now anyway

thanks for the help

Back in a day and still to some degree pulseaudio had it’s purpose, it’s initially made as some easier way to deal with default direct way of dealing with audio in Linux which is alsa and even more complicated, in fact it’s just insane for normal user

Pulseaudio is mostly fine for some normal stuff like motherboard builtin audio-interfaces which has simple routing like 1 stereo or 5.1 etc