Plasmashell crashing when starts up

Plasma starts but it crashes in the begining, leaving me with a black wallpaper, no main panel nor context menu on desktop. Latte-dock isn’t broken so It’s showing up and I can use it, as well as I can call krunner and launch any program (firefox, kedit, etc).

Looking up for a similar behaviour as mine I have found matches1,2, but trying what they say in it’s threads doesn’t help me (tried the plasmashell --replace script, tried also kstart5 plasmashell)

It broken from last kde-framework and qt libs update (I think it was 1 or 2 weeks ago, don’t remember exactly). I’m not using this computer right now so I was waiting for a patch/workaround/fix or whatever to appear, but it isn’t so maybe someone has the same bug and own a way to fix it?

PS: plasma bug app can’t achieve enough logs to send it to bug tracker (at least this is what it’s saying). 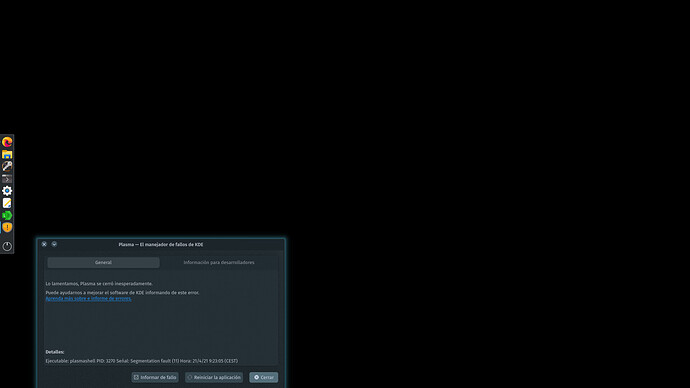 Have you installed any applets? Themes?
Does the x11 version work?
You could try resetting plasma to defaults:

If that doesn’t work:

Never tried this on wayland

I have been running plasma for quite some time and i don’t find these issues that seem to pop up here. From what i see it happens because of too many changes and additions to the plasma desktop. Themes, Icons and settings. Why does everyone want to call things a bug when it gets messed up?

Not all themes, latte and widgets work in all plasma version. Just something to keep in mind.

Tried both suggestions with no luck. Thanks anyway

It is, and once I logged into X11’s and relogged to Wayland problem disappear. Thanks! I should mark this as solved

I’m not the kind of guy who tries out all plasma’s plugin catalogue so I’ve always lived with one or two extra plugins, It didn’t happen before. Now I’m aware of that, thanks

Why does everyone want to call things a bug when it gets messed up?

It happen when a qt/plasma version update so I thought it was a bug, besides that, I’m not a developer and the definition of bug may not be as clear as yours.

From what i see it happens because of too many changes and additions to the plasma desktop.

I’ve only 2 plugins downloaded, Compact ShutDown and PlasmaConfigSave, both running fine before the update, and I’ve the same exact configuration on my laptop running plasma on fedora, never happened before on both sides.

How can I edit OP to mark as solved? I’m not familiar with this kind of forum…

I do understand what you are saying and Welcome to EndeavourOS. I’m glad it’s working for you now. Plasma is quite good and and i run mine on X11. Wayland is working quite well also. Just can click on the three dots … and check solution on the post where you said it was solved above.

Thank you very much