Plasma 5.20 A Massive Release Is Here - Tons of new features

It’s a good honor to follow us !
I wish they could put our logo on their site for it, lof of Endeavourians love Plasma like an old Lunixian I know here @FredBezies

After the regression clustermess that was 5.19 I really hope KDE have tested 5.20 a bit more thoroughly. Plasma disks looks promising, not holding my breath with Wayland though.

I’ve just been on Linux (Arch, Antergos, and Endeavour) for a few years, but Plasma has been there for me since day one, and I have to say it has been steadily improving. Things are most certainly going in the right direction. Sure, there has been a fair share of bugs, but hey, it wouldn’t be Plasma without them.

All in all, Linux in general is steadily improving, and Endeavour has reached the stratosphere and beyond in a very short time. Gaming has gone from more than troublesome to what it is today…

Wayland… I too wouldn’t risk asphyxiation.

Unless some really critical update comes through, I will probably be holding off for a point release or two.

For such a hyped release there aren’t that many functional changes, although I haven’t tested Wayland yet, and need a proper HD to test plasma-disks.

Nothing seems broken, although I don’t like the system tray grid view. These sort of changes really annoy me … just provide both grid and list view config options and let the damn user choose their preference.

What did you expect? It is the 21st release of Plasma 5.x. A lot of things have been made since Plasma 5.0 in 2014. I wonder how some people can get that excited by such a release!

I just see it as another update. I was already trying out the Beta then i reverted back and now i just updated to the final. You have to really know Plasma which i don’t and look for the changes because i don’t notice much. 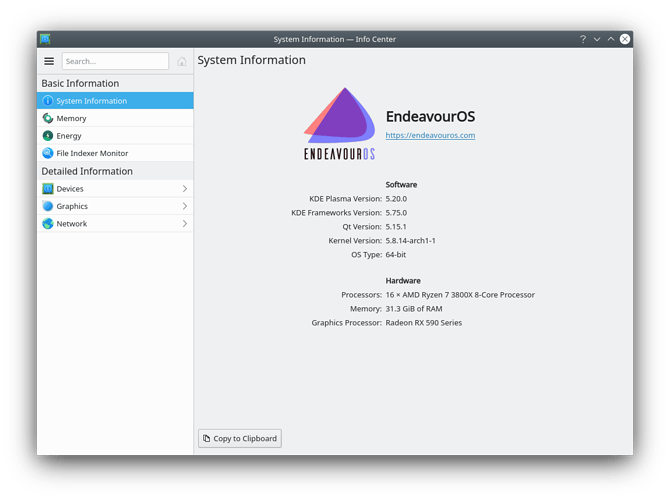 A substantial amount of the changes are related to wayland so if you aren’t using wayland or planning to in the short-term it isn’t quite as significant of a release.

I did run wayland for a bit and it seemed to work fairly well.

That’s funny, because I REALLY like that change, and it was my favorite part of the update, just makes it look easier to get my info at a glance to me.

I thought the volume indicators and such were suppose to be minimal/smaller? Mine are still large beasts that pop-up.

The only change I noticed was the digital clock applet which now displays the date by default. I changed it back to time only…

i really appreciate the work those plasma guys put in. I don’t use plasma personally. I tried several times, but its just not my thing. But its a great DE and its getting better and better. I also like Nate Graham’s blog about KDE (https://pointieststick.com/2019/09/15/this-week-in-kde/)

So thumbs up, definitely.

Curious about the plasma next theme changes coming…

once installed, will it automatically warn, in case of occurring problems?

once installed, will it automatically warn, in case of occurring problems?

cool, waiting for some troubles

What did you expect?

After 5.19 I honestly didn’t know. The previous .0 release was filled with many fundamental regressions that should have been picked up.

Anyway, nothing is broken, plenty of little changes … just not the “massive” release that KDE made out in their announcement blurb.