I know that subject is going to sound like a troll popping up, or illicit a lot of groans about this application running in Arch or Linux in general but with Wine 5.0… I have been to the mountain top, and it is good. 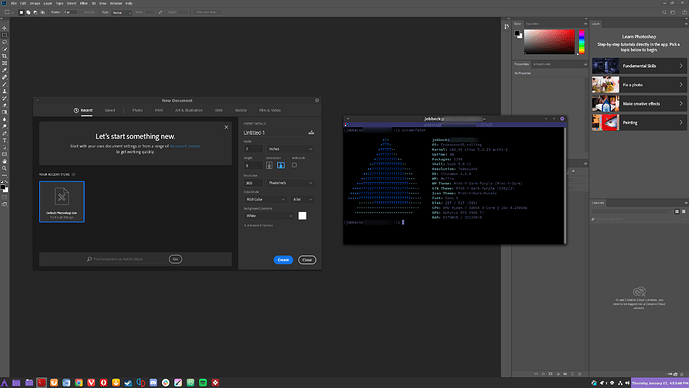 It even sees my 2080Ti as a graphics accelerator. The short version is: 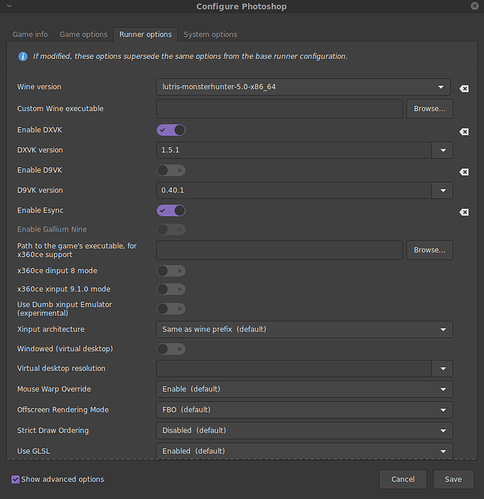 Save the configuration, I suggest opening the Log for Photoshop by clicking the little terminal icon, and then click Play and hopefully Photoshop will load up without an issue. Then configure as desired. I disable the new home screen personally.

This was more “Can I make this work?” than “I think this is a viable production system replacement option.” if you’re trying to get out of Mac/Windows land permanently. I’ve been trying this for a year or more now as new Wine point releases came out and this is the first time I’ve ever gotten into the application.

The one strange behavior I’ve had is that Ctrl + Z undoes an action, but in the instance of a brush stroke, the canvas doesn’t redraw until you make another stroke, which would definitely make this a deal breaker for a professional artist. However, what a neat step Wine has taken with the 5.0 release, even if it needs a custom spun build for this to work. Edit: Workaround seems to be just select all so the border is constantly ticking around the outside of the canvas, and Ctrl + Z undoes the stroke properly, I’m assuming because the select all is constantly redrawing the canvas for the ticking effect.

And yes, I used the Gaussian Blur tool to blur out parts of my terminal.

).
Since when I can’t stand Adobe I don’t know any more

I’ma reply here as a bookmark. This is great, thanks for writing this.

You know that you can bookmark inividual replies and comments without bread-crumbing?

It’s under the “hamburger/the three dots”.

Great to know that aswell, Mr_Ecks, but I actually also wanted to sincerely thank Hexidecimal for taking the time to write all this. The gesture itself made me glad, and definitely deserves recognition.

This is because you’re using a Nvidia GPU, and there is a frame delay bug, fixed adding this parameters.

Thank you for the fix

Another improvement. To create a propre file association, create a new .desktop file:

Paste this and edit according to your path:

Now you can add any image file association, and Photoshop will properly open, ready to edit the image.

Unless there is a very very good reason, use GIMP which, for 99 % of the tasks, is just as good as Photoshop. After switching to Linux full-time, I learnt GIMP. With plugin registry and GMIC, it is pretty awesome.

I still have a windows VM at hand for photoshop. my customers can’t be bothered with my philosophies.

other than that, even if you don’t have a very good reason to use windows apps on linux, you can do it just because you like them more, or simply because you want to:)

There’s really no limit what you can do and not do on your own machine.

@subluminal: I get where you’re coming from (if you don’t give linux apps a chance, you’re going to be stuck with windows apps), but still, to each his own.

PS. To this day I didn’t find a program on linux as capable as notepad++, and I’ve tried a lot of them. (Right now I’m using medit, which comes closest, but it’s still pretty far away). Every Linux editor out there lacks some of its features. I find it too cumbersome to use it via wine, but my point is, some things are still better on Windows.

Hello!!!
What you discover is really awesome but unfortunately i couldn’t make it work today at June 14. Do you know if is still working today ? Because i tried but it didn’t work =( .

hello! It’s not still necessary. I found a Photoshop CC for Linux.
Thanks anyway =).

I found a Photoshop CC for Linux

…and…thank you for sharing it here with the rest of us…? 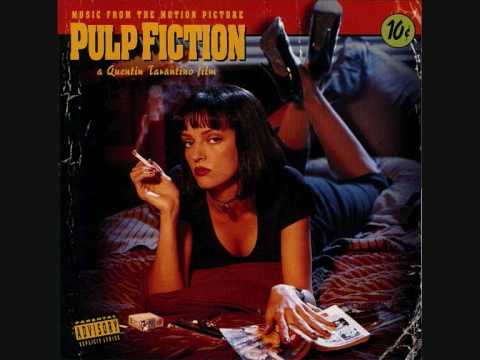 I have been working on a Crossover archive of Photoshop 2018 CC. But sharing it would be infringing copyright.

Absolutely not. What part of infringing copyright don’t you understand?

Do NOT solicit illegal behaviour from other members.