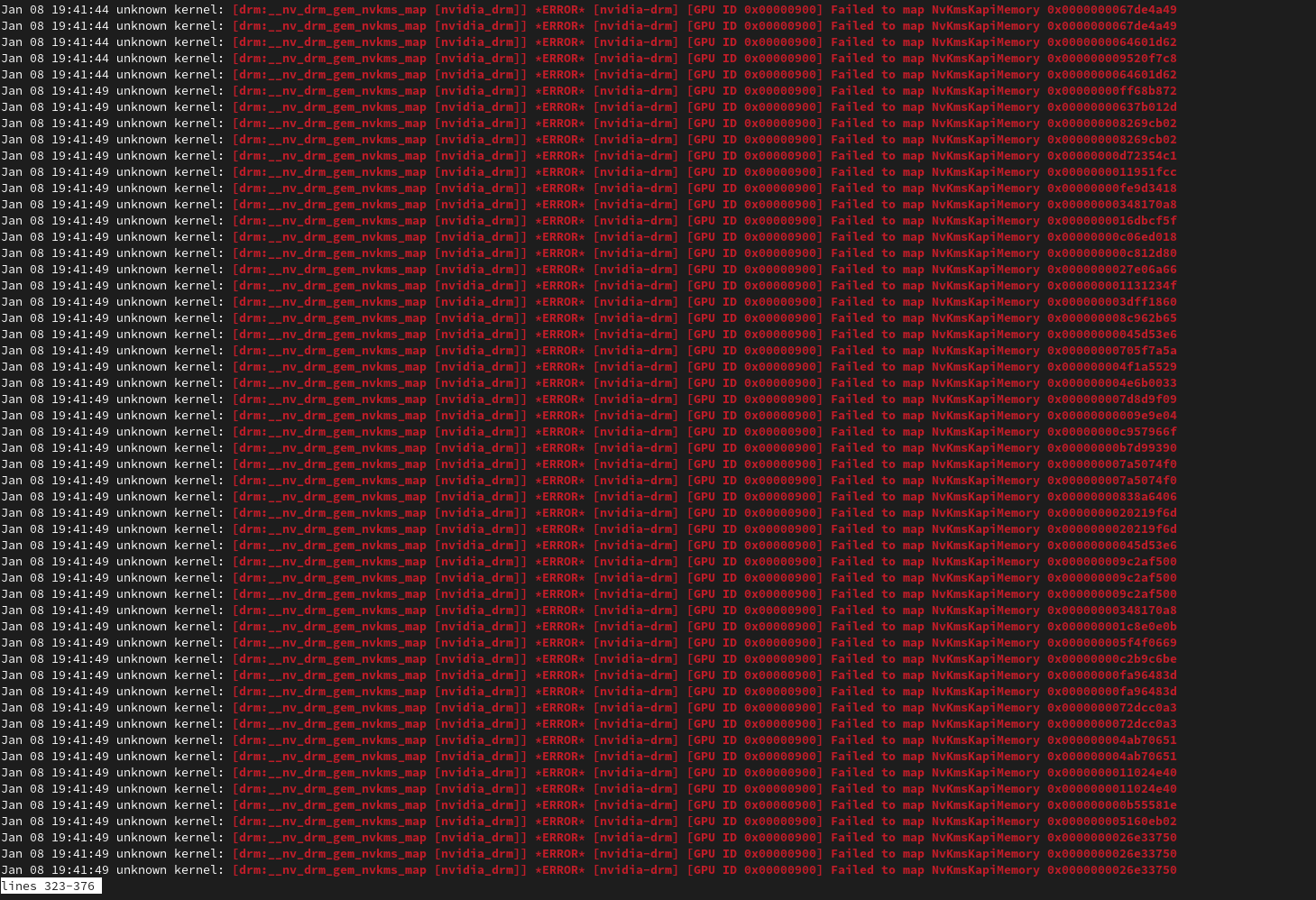 I hope you’re all well.
I went doing some maintenance and found this in my log. Does anybody know what that means? I did boot and install with the Nvidia option.

What gpu you have?
At the moment, i would advice against using nvidia with wayland.

and using an “unknown kernel” is a bad practise also

the output looks like log spamming to me but i could be wrong… i remember to see a current issue with latest Nvidia driver doing such?

So how can I switch to Xorg? I’d like to know if this is possible when I install Endeavour because I haven’t seen this option in the installer for using Xorg or maybe I’m just blind.

Edit: Seems like I got some issues with Wayland. Sometimes windows are just black so I only see a black box instead of anything within the window (Cryptomator app image for example).

so without you saying what Desktop in use it should be GNOME, as this is the only one using wayland per default?
You can switch to xorg session from GDM on the bottom right side after selecting your username.

I’m a little bit confused right now. Does GDM mean Xorg or does it only use Xorg to display windows and things?

Found this tips and tricks guide:

I did option 2. Force early load (KMS)
seems like it’s running better now. But I’m kinda confused now because if I go to settings → about system → it shows Xorg instead of Wayland if I not chose to use this option. Why is that?

I’m a little bit confused right now. Does GDM mean Xorg or does it only use Xorg to display windows and things?

GDM is the Gnome Login Manager … where you start your Gnome session and you can change the session type from “Gnome” (default wayland) to “Gnome on Xorg” there before proceed to login. like this is showing: 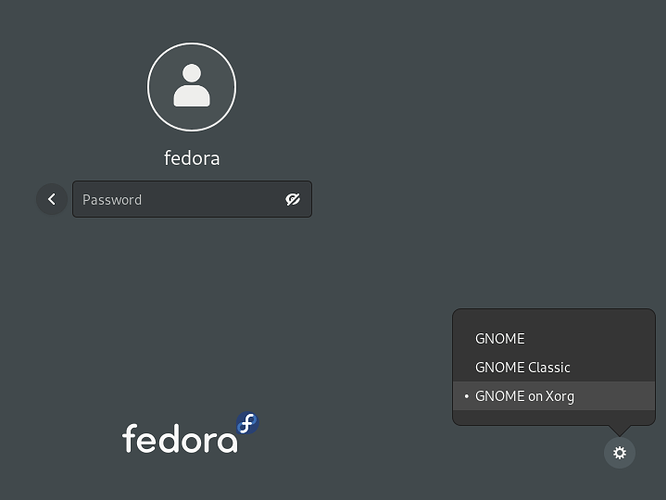 thanks I didn’t know about this.

Seems like there might be an issue with my Nvidia driver and Wayland. I found another “bug”. I use 1Password and its quick access hotkey which is not working on my main desktop. I just won’t open. But when I login with Xorg it works without issues.

Edit: could also not open Gnome Extensions. All of these issues will accur after some time using Wayland.

Wayland is not the default and is explicitly disabled in the default configuration of GDM.

If you enable Wayland then you’re going to find bugs - because it’s buggy.

As i said, it’s better to stay on Xorg until future driver updates actually fix things up. It can be next update or after 15 updates, until than, xorg is your best bet.

How is that? I’ve tested it several times and it was the second time I reinstalled the OS and it always did chose Wayland by default.

Wayland is default on gnome. However, if you run Nvidia, it should default to xorg. At least Ubuntu or fedora do that as I recall.

This sets Xorg as the default for systems with an active nvidia driver module. Wayland is not active by default - if it is on your system it’s because of a change you have made (or you’re not using NVIDIA).

No, that’s not the case for me. If I install the system and boot with prop Nvidia drivers I assume they will be installed with the dkms version. Anyway if I check a fresh install and go to the system settings in info it says its using Wayland. I had to manually chose Xorg in the login screen.

@jonathon so installing via Nvidia dkms is not the same as installing the Nvidia package? I did that and it uses Wayland.

so installing via Nvidia dkms is not the same as installing the Nvidia package?

nvidia-dkms provides the same driver as is in the pre-compiled nvidia package.

I did that and it uses Wayland.

With GDM? That seems very odd to me, especially when you also say:

I did option 2. Force early load (KMS)
seems like it’s running better now. But I’m kinda confused now because if I go to settings → about system → it shows Xorg instead of Wayland if I not chose to use this option. Why is that?

Unless you enable modesetting then Wayland is not available. Enabling early module loading doesn’t affect that:

For basic functionality, just adding the kernel parameter should suffice. If you want to ensure it is loaded at the earliest possible occasion, or are noticing startup issues (such as the nvidia kernel module being loaded after the display manager) you can add nvidia, nvidia_modeset, nvidia_uvm and nvidia_drm to the initramfs.

So I can Test this right? What’s the dkms command for removing the driver? Is it “-n?”

I’d like to test this. So if I uninstall the driver and reboot it should normally use Wayland because my driver is not installed nor active, right? So if I install it again and reboot my system it should show X11 in settings if I’m not mistaken, shouldn’t it? 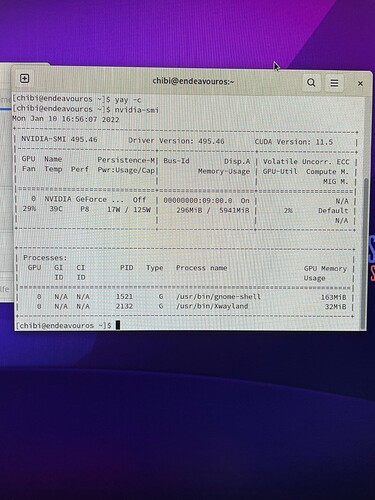 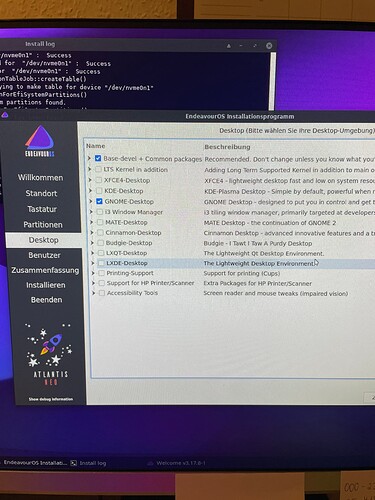 You see me installing EndeavourOS with Gnome. I didn’t change any settings there but I did start with Nvidia drivers. You see them successfully installed in the other screenshot. After installation and at the first start, the window manager suggests logging into Wayland. Afterwards, under settings, you see Wayland has been loaded.

So as you guys see my Nvidia graphics card has been installed (or do I have to dkms install it again at the first time booting) and the OS has boot into Wayland nevertheless.

After installation and at the first start, the window manager suggests logging into Wayland.

I don’t understand - that’s not how it should work with Arch defaults. I guess the EnOS installer enables Wayland support?

It seems like it does and it seems like the script which detects an installed nvidia gpu won’t switch to X11.