since AMD will probably take a long time until they finally release a RX 6600(XT) I am thinking about purchasing a RTX 3060 (non-ti) when it comes out.
However I have already heard that running NVIDIA cards on linux ist quiet a pain. The drivers are really underperforming and some even experience regular crashes. Is this (still) true? Or can you actually have a good (gaming) experience on linux with NVIDIA cards?
I hope to hear from your experiences.

The drivers are really underperforming and some even experience regular crashes. Is this (still) true?

I haven’t seen that with my setups at all for couple of years or something like that (Titan X / Quadro P5200).

Or can you actually have a good (gaming) experience on linux with NVIDIA cards?

Hardware and software are very good, no doubt on that…
Also you’ll get Nvidia only proprietary stuff like:

and all that jazz…

There is only one problem with Nvidia - drivers are not open-source, so green bastards can do whatever the hell they want.

Also because of that, when your GPU will get “out of support” with latest drivers (something like 10+ years i guess), older drivers will move to AUR, if you’re lucky and there is someone who still want to support them (usually there are people capable of that).

If not, you can use some open-source Nvidia drivers like nouveau in such case, they’ll work but performance will be crap (at least like they are now, coz it’s pretty hard to do Nvidia’s job for them and reverse-engineer, as you can imagine).

It’s a shame that they don’t release open source drivers but their cards seem to be still superior to AMD (although they made great improvements this year) especially with features like DLSS.

Other than that, i’d probably go for AMD this year, better quality / price…
Not sure about lower segment, which you’ve mentioned in OP though, have no direct experience personally

Yeah I thought about going AMD but considering their top end cards are still not available here (at all, let alone for sane prices) I think the rx 6600 is not going to get released before mid 2021 and I’m kinda already waiting. I plan on going with the lower/mid tier segment since I don’t have a 4k monitor anyways.

Fwiw, I’m never giving money to Nvidia again and I’m eyeing up the current generation of Radeon as a strong contender to replace my 6600 TI.

Yeah, I have vowed not to buy another Nvidia card until they make their drivers open-source (not holding my breath). Personally, I would rather never play another game than give Nvidia a penny.

One of my computers has an older Nvidia card and it is nothing but trouble. The card itself is fine, nothing wrong with it, so I’m reluctant to throw it away and just create more electronic vaste. Every time there is an update to kernel or xorg, I can’t boot my computer, and I have to downgrade and wait for somebody to hack up a patch for it, and somebody on the AUR to update the drivers (and several people have given up on doing that, as it’s getting more and more difficult). It’s a total mess. So, very soon, this perfectly fine card is going to end up in the rubbish. I hate Nvidia for making me do that, and I swear, this is the last time I’m going to be in this situation.

If you’re okay with buying hardware that requires proprietary drivers, you may as well use Windoze, the gaming experience is better there anyway. Most Linux users choose Linux because they don’t want that crap on their computers.

Also, obligatory sharing of Linus Torvalds giving Nvidia the finger (this finger wrote Linux, btw), because no thread about Nvidia can be without a link to that video (NSFW obviously):

I never had any problems with my NVidia GPU. Only thing was not being able to use Wayland properly. But Wayland is not good enough, yet, for me anyway, so it doesn’t matter. Overall the only reason I would buy an AMD GPU, is, that it is open source. More a thing of principle than actual pros and cons.

The fact that AMD skimped on bandwidth so their cards are slightly hamstrung for 4K is a real shame.

Hopefully they’ll fix that in the next generation and then I won’t be able to resist upgrading my 2070S.

When I bought the 2070S my hand was somewhat forced because I needed good compatibility with VFIO and AMD didn’t offer that.

At least AMD have fixed VFIO so that their cards can handle being passed through a lot more gracefully. If I was AMD I would also eye up making MxGPU ( https://www.amd.com/en/graphics/workstation-virtual-graphics ) available for enthusiasts as that would fit nicely with how popular their cards are with tech enthusiasts.

I’m not sure if this translates to gaming, but rendering with Blender using a nVidia card is significantly faster on Linux compared to Windows: 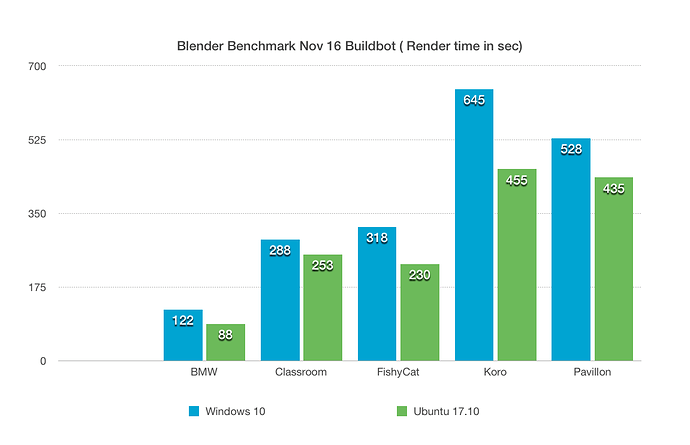 Here at the Pixelary, we try to squeeze every bit of performance out of our hardware. And one thing we noticed is that when using CUDA GPU rendering, Blender’s Cycles renders significantly faster on...

However I have already heard that running NVIDIA cards on linux ist quiet a pain. The drivers are really underperforming and some even experience regular crashes.

I was using nvidia for many years. I basically used nvidia for all my PC over the last 20+ years. I had no stability or performance issues. Not with steam playing games and not with darktable and opencl.

Recently I moved to AMD RX 5600 XT and have no issues with that either.

Only if you work at nvidia.