Welcome at the forum

Nice to see Some good info on the Issue.
But How do you Create The USB Stick?

Hello! Thank you for the warm welcome

… I will update the original post with that info. I did try with dd and Gnome Disks.

okay, both should be fine to create the installer stick…

The nvidia card should work fine with the nvidia version too…
At the moment I have no clue why it should not work.

And as you can boot on the default entry you will be able to install system and go to change to nvidia drive from installed system… and if not we would see what is wrong.

simple install nvidia-inst on installed system and run it…

I can try that. I was a little concerned about installing using non NVIDIA boot option and then ending up in the same place switching to NVIDIA post install. But maybe that can shed some light into the issue. I will try and follow up.

I can only day that there is no known issue with the Nvidia boot option.

Do you need to pass “ibt=off” for the intel cpu ?

Is that something I would do from the boot menu via some additional kernel boot parameters?

If it is the issue then yes, add it in the kernel parameters

Okay, completed the install and booted into the OS without using the NVIDIA driver option from the live USB. However, after installing the NVIDIA drivers and rebooting, the system froze again during boot. The only difference between booting the live USB and from the installed OS on disk is that I saw a lot more output. Looks like the kernel is loading and then System D output even appears and just before switching to the GUI, the system hangs.

What is your hardware?

Do you need to pass “ibt=off” for the intel cpu ?

this is a Desktop system so i bet it will not need this? is this not only needed on optimus ?

nvidia may not boot on Linux 5.18 (or later) on systems with Intel CPUs due to FS#74886/FS#74891. Until this is fixed, a workaround is disabling the Indirect Branch Tracking CPU security feature by setting the ibt=off kernel parameter from the bootloader. This security feature is responsible for mitigating a class of exploit techniques, but is deemed safe as a temporary stopgap solution. You can alternatively try nvidia-open and continue using IBT.

so seems legit to set the parameter…

However, after installing the NVIDIA drivers and rebooting,

Can you try installing LTSD kernel and if not using nvidia-dkms the compliant nvidia driver?
(nvidia-inst will install nvidia-dkms) 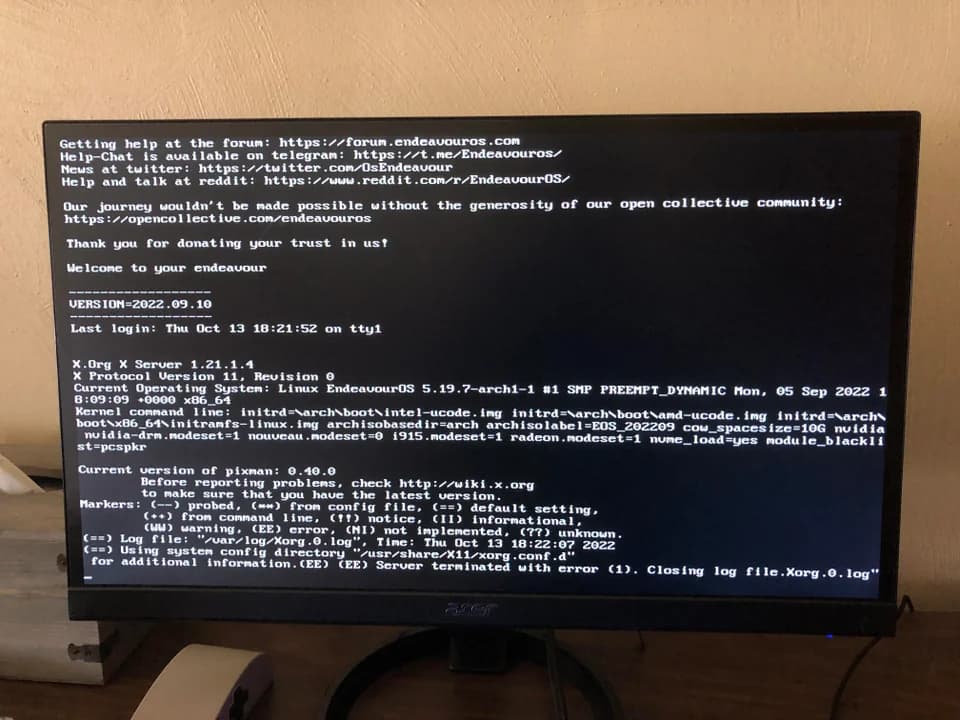 I’m having a similar issue. I was trying to install EndeavourOS last night, and I selected the Nvidia boot option. It would get stuck on the pictured screen for a few moments. Then it would scroll and get stuck on this screen again. There’s an error at the bottom, so it seemed like something went awry and it kept retrying. I went with the default boot option, which booted into live mode just fine. I installed from there.

I’m trying to figure out the best way to install the Nvidia drivers now. Should I add “ibt=off” to the GRUB file, install with nvidia-inst, then reboot? Should I try nvidia-installer-dkms instead? If I try something and the OS doesn’t boot, what do I do to fix it?

add “ibt=off” to the GRUB file, install with nvidia-inst, then reboot

It seems like it worked. EndeavourOS booted, and a screen tearing issue I had is resolved. I haven’t tried a game yet, but it seems like it’s working. There were some warnings and a few small errors during the install process that didn’t stop the install from running (I don’t remember what they said) but it seems to have worked fine, and running nvidia-inst -t again no longer has those errors.

Also to note, after I did that, I decided to try replacing GRUB with rEFInd. I think in the process I deleted /etc/default/grub. Everything still works, so good stuff, I guess.