No sound from speakers on fresh install

I have a Dell xps 17 running Atlantis gnome. The speakers do show up both in sound settings and in pulseaudio volume. The microphone does not show up at all.

I can say I have had EOS before, with the August ISO. Everything worked out of the box that time, and updating to pipewire later did not cause problems either.
https://clbin.com/9kMPo

would if I could, its the internal speakers
*edit should have mentioned it. Also they work fine in windows

Sorry i didn’t notice is a laptop.

Its actually preinstalled, but I have tried to reinstall, remove and install etc…

It does need sof-firmware installed and reboot.

I was on the April .iso, but manually changed PulseAudio to Pipewire since that’s now the default and I don’t want to be left in the dust! I had one or two quirks with Pipewire output configuration, but between laptop speakers, bluetooth UE Boom speaker, and Samsung Galaxy bluetooth earbuds, everything does work on my end. Here’s my current sound setup, perhaps you might need to select a different ‘configuration’ ? 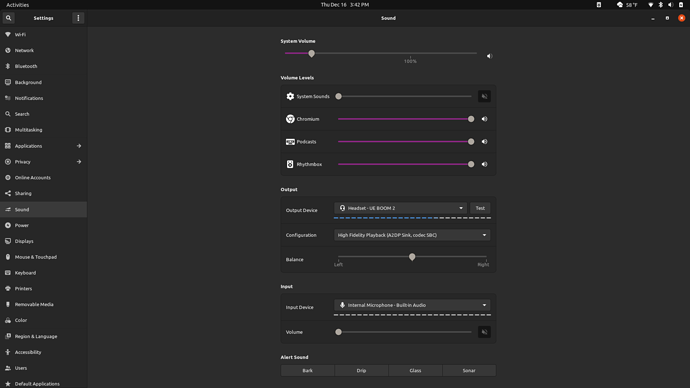 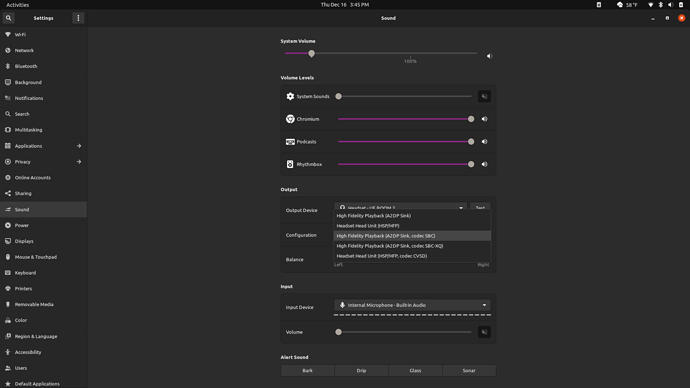 Haha I actually tried an install with sway first, but that was just even more hazel…

I like Sway…but Wayland…? It’s great when it works but for the most part I’d rather not bother.

I remember that it looked like that before! how did you get the “volumes levels” tab? Bluetooth, headphones, usb c headset etc works. Only thing that does not work is the internal speakers and microphone.

If you have sof-firmware installed then it’s probably a configuration issue.

@Scotty_Trees is the Gnome expert!

I wish I was not addicted, got it without knowing it when I installed arch for the first time. Accidentally used x11 and it was dreadful…

X is awesome …again when it works right!

The volume levels tab shows up whenever you have anything open that uses sound, for me that’s currently Vivaldi (displayed as chromium), gnome podcasts app, and Rhythmbox open which is currently playing music. System Sounds should always be there by default, if you don’t at least see that, then you might be missing a crucial package. As for the microphone, that should also be displayed by default. Your Dell XPS 17 was released back in May 2021, so the hardware “should” be support by the kernel by now, but it’s possible you might want to test the LTS and ZEN kernels via EndeavourOS akm app just to see if this is more a kernel issue than anything else. What kernel are you on now?

What is your current audio status show?

@Scotty_Trees is the Gnome expert!

I’m not an expert, I just enjoy suffering

Do you have a Dell too?

Edit: OP’s hardware output shows alsa and pipewire so should be.

Clicking on my username shows my hardware and software, for future references