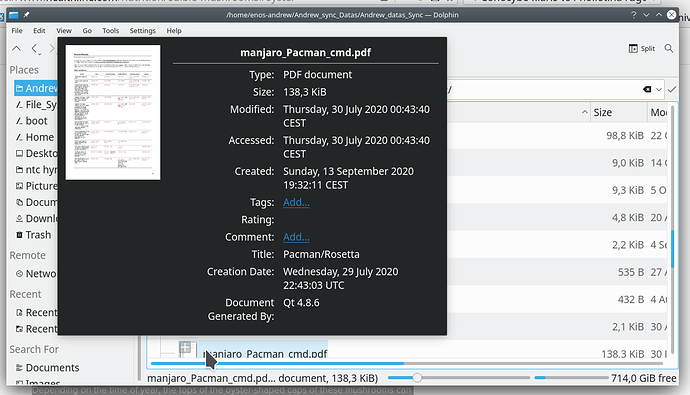 1313×752 144 KB
May i know how to move this black box aside? it appears each time my mouse lands on a file while browsing for file in dolphin , it obstructs me reading the name list of the files in the folder.
I don’t mind it brings on the details info of the file, just that it stand in my way . can i make it to display right side of my mouse or a certain distant right from mouse ?

What a terrible crap btw, jeez

Let’s try to fix the behavior instead of adding steps to get the information. @andrew_ysk besides creating a help thread here I’d also create one on the KDE forums.

Can it be fixed at all though, in a form of tooltip?
Now it goes either top or bottom from mouse / current file - which makes a lot of sense for small tooltips or in general.

But in case where it is just a huge panel-style tooltip…well it’s a little too much as a concept.

For example if they’ll move it to left / right on upstream - it still won’t fix the problem, as you may cover a lot of other stuff you need to see

Tooltips are great when they’re small

But in case where it is just a huge panel-style tooltip…well it’s a little too much as a concept.

For example if they’ll move it to left / right on upstream - it still won’t fix the problem, as you may cover a lot of other stuff you need to see

Tooltips are great when they’re small

You’re right about this. I like having the tooltips, but at least with Plasma they are way too big. I hate to say it but Windows does a better job with tooltips than Plasma does.

This is as I stated above a Plasma issue. Maybe I’ll go into their forums and created a thread about it, asking if there is a way we can manually decrease there size or the amount of info they collect which helps determine the size. Unless you want to go in and create the thread. Just let me know either way.

Can you go to their forum to raise up the question , pls ?
Thanks.

Yea, sure, no problem. I’ll post back here when done.

How to decrease the size of tooltips • KDE Community Forums

KDE said it is Dolphin issue, not Plasma issue…

So still their problem then since Dolphin is their software. I’ll checkout what they had to say.

All this is in the Dolphin settings and in the View menu. BTW, moving this to Dolphin, this is not a Plasma “issue”, this is Dolphin specific

That just means it isn’t a plasma issue in the plasma section of the forum. It was moved to the dolphin section where it belongs.

I would of never guessed.

So still their problem then since Dolphin is there software

The world does not necessarily revolve around an individual. You also spelled their incorrectly

Actually I missed it in my edit.

Rest assured I saw your unedited posts. I would never edit a users post without talking to them first.

Some of us don’t even see these as an issue. It’s not going to get changed just because I think so. I just use it as is.

Nothing wrong with the OP or me putting in a feature request with KDE to possibly in the future to have separate setting for the tooltips and thumbnails.

If that was what you actually did you (OP included) would be correct.

You are requesting this feature for Dolphin. This thread has achieved it’s purpose. It is not even related to this forum at this point.