Make your own license

What if you had a option to make your own license type for example GNU General Public License,or an proprietary license.
What will its description be and which one do you think is best type of lisence

Most of my code is practicaly released as abandonware.

I would probably use one of the 237,875 existing licenses before making an additional one.

If I’d ever make my own one, this one would be the basis:

When I don’t care about what I’m making, I use the MIT licence (permissive).

When I do care, I use GPL3 (viral copyleft).

When I program at my daily job, it is my employer who decides what the licence is, and it’s usually some proprietary garbage one. That sucks, but it’s beyond my control. 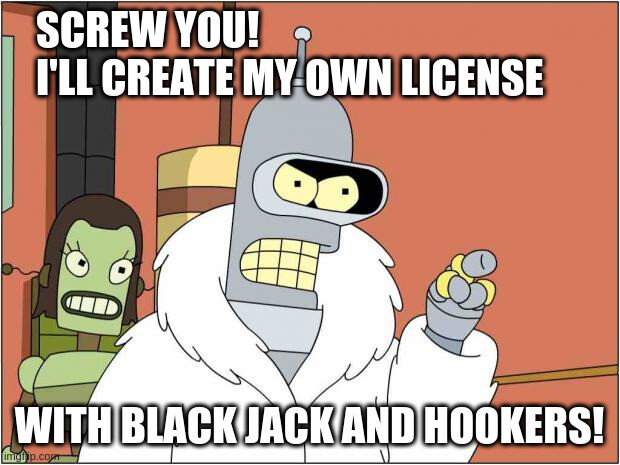 Wait. Can we really license blackjack and hookers?!?? That seems lucrative.

Some people want to grow up and be doctors or astronauts. I want that!

how did you find that

I don’t see much point in making a license ;-;

One of the popular ones listed at link below usually suits most purposes
https://opensource.org/licenses

For the stuff I write, if its a library or something that will see others programs using as a dependency, I’ll keep it MIT to allow greater number of devs use it. For software that are for end users, I’ll keep it GPL v3. For stuff like documentation, tutorial, articles etc, I prefer one of the Creative Commons licence, usually CC BY-NC-SA 4.0 (link).

That being said, I haven’t actually yet written any code for personal projects that people actually use. When contributing to other projects, I gotta agree with whatever license the project uses.

No, I’m a Free Software guy.

In my opinion “open source” is a subversion of the more ideologically pure Free Software.

Though, personally, I’m fine with open source, as well, especially for things which do not matter. But for software that matters, I would prefer it being licensed under a more restrictive licence, specifically, GPL3, rather than simply having its source code published, just so that greedy bastards cannot fork it and make it proprietary.

how did you find that

He was being hyperbolic. Though I wouldn’t be surprised in the slightest if he got it right