I don’t want to mess up your install if something goes south changing settings.

If you not install do alwys with right settibgs but some pc uses ahci but this board idk…should always see m2.

Thank you for that.

Okay i found the issue i think

Is this the drive EndeavourOS is installed to? It’s MBR not UEFI.

Yes this is the drive; MBR? How can I check?

So does it show Bios with the command i gave you?

Edit: It will show either UEFI or Bios.

Are you still there? I’m waiting for you to reply to the posts?

Edit: When you install it should show UEFI (EFI) or MBR in the top left of the installer window here. This depends on your settings in the UEFI Bios. 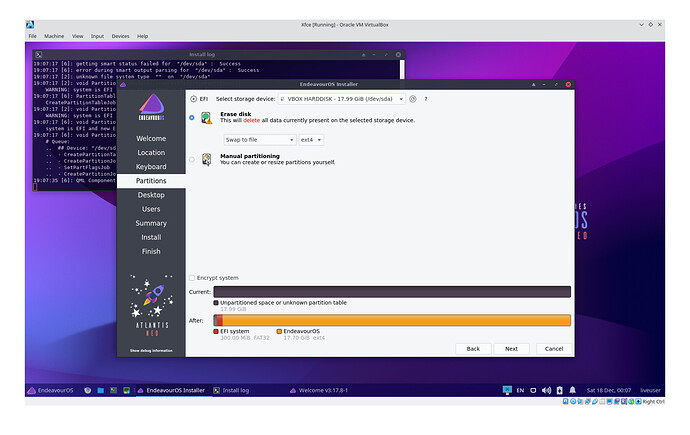 So the efibootmgr command won’t work if it’s installed in MBR mode. The command i gave you will show UEFI or Bios (MBR)

I can’t say for sure this is the reason your drive isn’t showing up in the boot order. But it looks like it is installed in MBR mode not UEFI? Your board is a little older and the settings are a bit weird. It looks as though the setting has to be on other OS in order to turn off secure boot which it does automatically then. In that case i would set CSM on auto.

It’s not a problem that it’s installed in MBR as far as working but that’s what it looks like to me. I’d like to see the output of the other disks?

Aha I have to check that now.

Okay well if the other is RAID then I don’t know? I’m not sure how you set all this up? Was the other m.2 drive added later?

So was the m.2 drive there in the boot order before?

AHA so I’ll Check that.

Looks like I replied in the wrong place. I was referring to your post on the Iso whether it was MBR or UEFI