The boot menu looks fine, but when i start the default entry, i see 3-4 lines of text and then my monitor says “no signal”.

I have no problem installing Arch by hand, but i wont give this project a chance…

how do you “burn” the ISO?
as “starting in UEFI mode” implement you where using a programm changing the ISO to create the install media?

From the BIOS Menu i Start the stick in Uefi Mode

What NOT To Do Some USB Writing utilities alter the labels of the partitions included in the ISO image. This causes the boot to fail. There are workarounds to fix the failure but tha…

the Stick ist booting. That is not the problem.

After selecting the entry the system crashes

i made a new stick with Rufus, but same problem

Did you use the dd mode in Rufus? See:
https://github.com/pbatard/rufus/wiki/FAQ#GRUB

Welcome @DOcean
Please try this ISO and see if you can get the installer working. If it works and installs the system you will still need to install Nvidia drivers for the GTX1070. I’m sure you know how to do that if you are able to install Arch by hand.

the beta has the same issue…

now i give rufus in dd mode a try, but… i dont think thats help

This is strange to me. This ISO works for me on my on my Uefi system with an Nvidia GTX1060 but I’m wondering if the same problem exists where your card is not in the data base?

Could you also post the output of your card somehow? Then maybe @joekamprad can check if it’s listed. This happened to me originally and my card was added.

This ISO should work if the USB is okay. Personally i always use etcher on Linux and i have never had one issue but if it’s being done from Windows i think Rufus is a good choice.

the problem is not the GPU but the TFT

i think the live system forces a wrong mode, but how can i fix this?
(Infos from the TFT: https://pastebin.com/PmaKcuuq)

Yes, i see you are using 144Hz monitor… I will let @joekamprad or @manuel weigh in here on this. I’m sure some change needs to made to accommodate this somehow.

Have you looked at the Arch wiki then?

Hey,
I had the same problem on ThinkPad T495s with low-power display, I just had black screen after I booted live usb. After I pluged secondary display everything was working but still I had some problems - look at uploaded image. 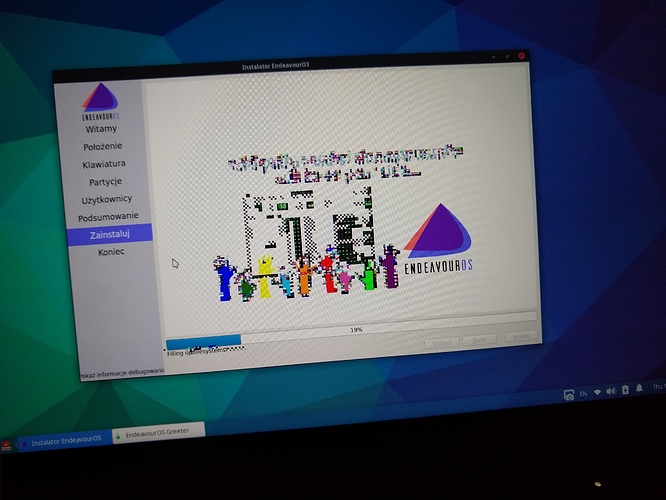 If i remember correctly @Resiliencia had a similar problem regarding monitor frequency and also some workaround… Let’s see if is the same problem he can shed some light in this matter.

@fernandomaroto
Well, it is not the same problem, since the images looked good but desentralized, especially at the start after the grub screen loading the system. I was able to fix it in 70% from the monitor controls themselves (Acer AL1916W), that is to be able to go up, down, go left and right with a still image to be able to take as a pattern.

I couldn’t do anything for console with Xrandr, but I managed with the monitor controls themselves.

What cable are you using on the monitor that is 144hz?

On Windows all works fine. 144Hz in Windows is nice

Perfect. Display Port is the way to go. So you are able to install Endeavour then but it just won’t work on 144 Hz?