Hello,
last time I have read about Arcolinux,
allegedly (very) good system.
Is there experience with it?
Thank you.

What desktop environment are you planning to install Arco with?

If you can navigate through all the crazy ISO versions it is a perfectly good Arch-based distro. Just a matter of personal preference.

Here is a video containing a review of Arco Linux with MATE desktop. Hopefully, this can help you make a decision. 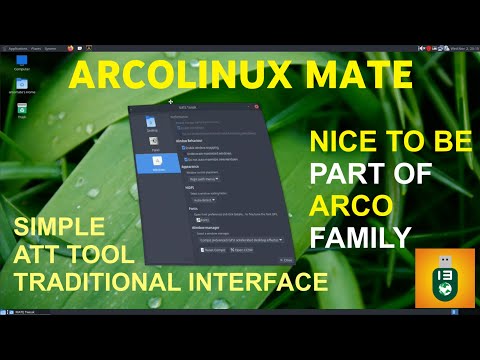 Thank you very much,
I’ll see.

Arco Linux is nice but too bloated for me. Installer is very granular in package choice, can be confusing. They have many many choices. The maintainer definitely loves what he is doing and gives you the freedom to choose.

Honestly - I try find something instead of EOS,
at least for PC.
After crash and new install (PC, big notebook, small notebook)
all attempts to get opportunity printing - misfortune.

It’s based on arch. If you can’t fix your hardware issue on eos, unlikely it will work on Arco Linux

Eric and Arco-team does awesome job to the community. But what comes to that webpage and image distribution I get lost on first page

If you can navigate through all the crazy ISO versions

This was precisely my experience with it. I tried a couple of their iso’s. Definitely not a bad distro at all. . . once you figure out what/where you’re going and need to get. I liked that there was a lot of options as you installed so if you already know what you want, you could install pretty much everything all at once in the install process and be rolling out of the gate. I didn’t have any trouble with the installation, and everything was done quite well. Just figuring out what to download was the only hurdle I had experienced.

Honestly - I try find something instead of EOS,
at least for PC.
After crash and new install (PC, big notebook, small notebook)
all attempts to get opportunity printing - misfortune.

I have been using Fedora on one of my computers for a few months now. Everything just worked post install and has been going great. That would be my recommendation if you’re looking outside of EOS.

I have used Arco before I found EOS. Arco worked well enough if you can figure out which one to download, until…it didn’t…IDK why, but it stopped on this machine of mine, and reloading wouldn’t work either. It forced me to look for alternatives. EOS works on the same machine, albeit with a few customizations to get nvidia going.
However Eric is a lovely guy, and very helpful, so if it works for you, why not? Distros are not religion, and you cannot get to heaven by choosing the right one.

It’s based on arch. If you can’t fix your hardware issue on eos, unlikely it will work on Arco Linux

Hm…Yes and no.
I had (have) problem with printing , topic here:
Printer HP does not want to work after EOS crash,
all 3 my computers with EOS.
Then I have installed Manjaro, and … no problem to print !!
Why? I do not know.

Did you try here:

Earlier I used Arco. It’s fast and provides good Tools e.g Arco Tweaks. I like Mate with I3.
I downloaded from here
I added i3 with tweaks. From config commented out bar, conky, status bar etc so that i3 desktop is empty.
Followed the instructions of Steve
I like this combination of the two DE-s. EOS used less memory as far as remember.

As others have noted the front page of the Web site is intimidating. The “B” version of the ISO file is the one to go for.

It is a fantastic effort by the (sole) developer, who is clearly very able technically, but it is a bit busy - even with “minimal software installed” there is a lot going on. EOS is quieter

Hmm… yes and no, you changed the “other” distro which is not EndeavourOS, to one provided by an organization. Manjaro has to work in that case…

One reason why I suddenly wanted to join Discord (and was disallowed because I have no phone on me) is to see for myself what type of person was the project leader of ArcoLinux. I was discouraged by the relative lack of activity on their forum.

The distro is a good one, like a few other people have already said here, but it has too much substance I don’t need. Their website is confusing. I think they should provide one ISO. It seems Calamares is that hard to program to limit a number of packages such as “bare-bones” install as opposed to “everything” install.

I started checking out that distro at least a week before the XFCE v4.18 update. But it didn’t use the provided Terminal Emulator for the Thunar command “Open in Terminal”, it used “uxvcrt” or something like that which isn’t friendly to copy-paste. It took me a good part of an hour to configure it to use the XFCE Terminal instead. That Thunar context menu perhaps had too many options, almost didn’t fit my rather small laptop screen.

Also the default theme was ugly, disliked the icons looking like bad candies to eat LOL. I was going to use that “Desktop Trasher” of theirs but I should have chosen GNOME or Budgie first for it… sorry but my experience with other distros on those D.E.'s wasn’t very good.

ArcoLinux starts fast like EndeavourOS but I would like to be able to see the “systemd” messages before log-in screen. I don’t like Manjaro neither hiding them from me.

I like Arco Linux as an Arch based distribution but their website is awful. It didn’t used to be this way but has gotten so confusing and over the top that i just got away from it.

Arco is just too much bloat for me. EndeavourOS is about as bloated as I can take it.

I think that could be the case also. Haven’t used it in a few years. Almost 4 i think.

Really? The ArcoLinux B series are essentially nearly equivalent to EndeavourOS and presents an installation similar to EOS.