KWin high CPU and Memory Use

My desktop has been up for several days now. Both my wife and I are logged into our respective profiles and we switch between as necessary. I’m experiencing high CPU use and Memory use that seem to be a result of kwin_x11 (see attached screenshot). Doing some research, it appears that kwin is kind of notorious for high cpu bugs so it is difficult to figure out where to start. This is on Plasma 5.20. All up to date. I have Thunderbird open and Chrome open with about 30 tabs. I am also running an appimage program called xlights that controls our Christmas lights. None of these items however seem to be coming up in the process list as consuming lots of memory or cpu, just kwin. If I restart the computer, everything goes back to normal for a day or two and then this starts creeping up again.

Has anyone else experienced this issues? 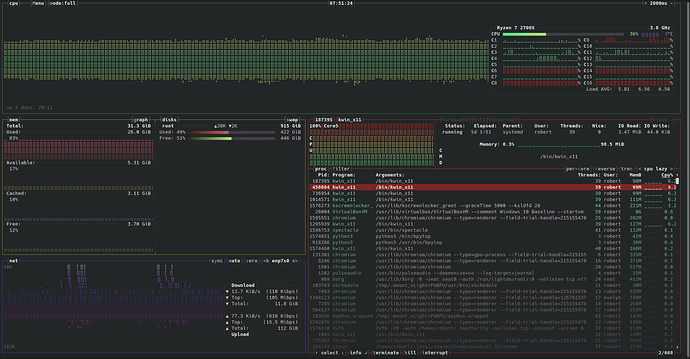 Are you using any plasmoids?

I would expect it with 30 tabs open.

But I would be expecting Chrome (Chromium it appears in that shot) to show up with 30 tabs, that shouldn’t cause Kwin to ramp up that badly. Although given what I can see of the list, it does appear Chromium is using much more than kwin in that screenshot.

No but I would expect it to use more that’s all. Not 32 GB

So I went and closed everything that I had open and took a new screenshot. The memory consumption went down of course due to closing Chromium. CPU use still is high though and I have 5 process of kwin_x11 running. 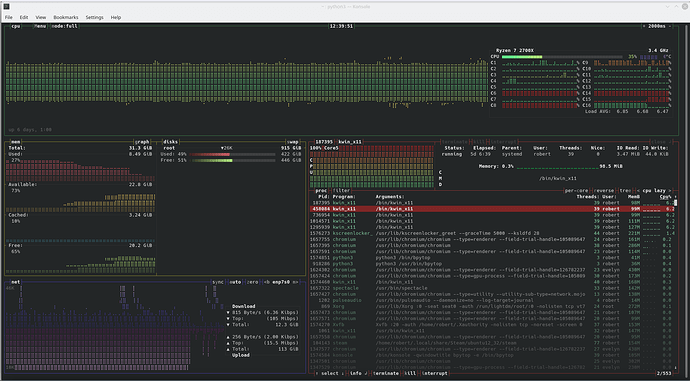 I have kde plasma installed also on Ryzen with 32 GB memory. What app is that you are using to check? I will look at mine.

It is bpytop, just discovered it a couple of days ago and I have been really liking it.

I have installed it and running idle it uses about 5.62 GB. So then i opened 30 tabs in firefox. It’s not using that much more. It’s close to 6 GB & it probably will go over. It’s only been running for about 3 minutes.

Edit: Normal with just Firefox open is 1.59 GB memory which fluctuates a little.

Just another quick update. I ended up going through and killing about 8 x11_kwin processes. CPU use finally went back down to something more reasonable. Is it normal for x11_kwin to spawn so many processes and why can I kill them without any noticeable impact on the system other than my CPU use going down? 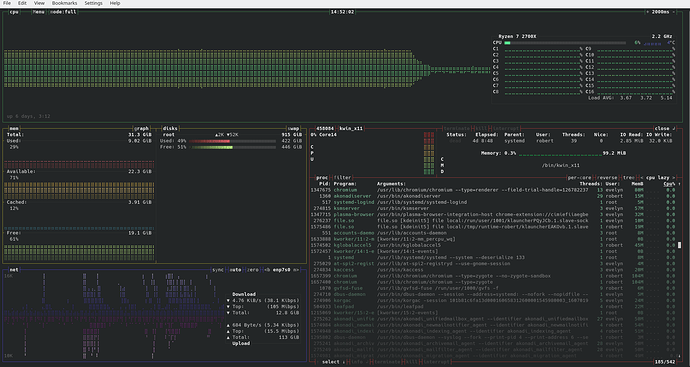 I think this program is using a lot of resources.

Is it normal for x11_kwin to spawn so many processes and why can I kill them without any noticeable impact on the system other than my CPU use going down?

You should have one kwin process. I assume kwin crashes, spawns a new instance but the crashed process isn’t properly killed but stays around as 100% CPU zombie.

Try to figure out what you did when an additional 100% kwin process appears (sleep/wake, switching users, starting a particular app, …), also check journcalctl -b. What’s your graphic card and driver, is that known to have issues with kde/kwin?

Is it normal for x11_kwin to spawn so many processes

More clues to this mystery. I think the issue has to do with Chrome-Remote Desktop. I use it to remote into my machine and I think it might be related to closing the browser tab instead of logging off the remote session. Not positive yet on this but I am leaning that way because the extra kwin processes seem to appear when I am doing remote work.