Funny how things go sometimes… I must have tried KDE a dozen times already over the last 5 years, and I always disliked it (I normally use Gnome). But then I made the effort to learn how to theme it properly and set up the desktop environment, and everything started to make sense. I really like it now.

That just shows you… always make an effort before forming an opinion.
My humble setup… 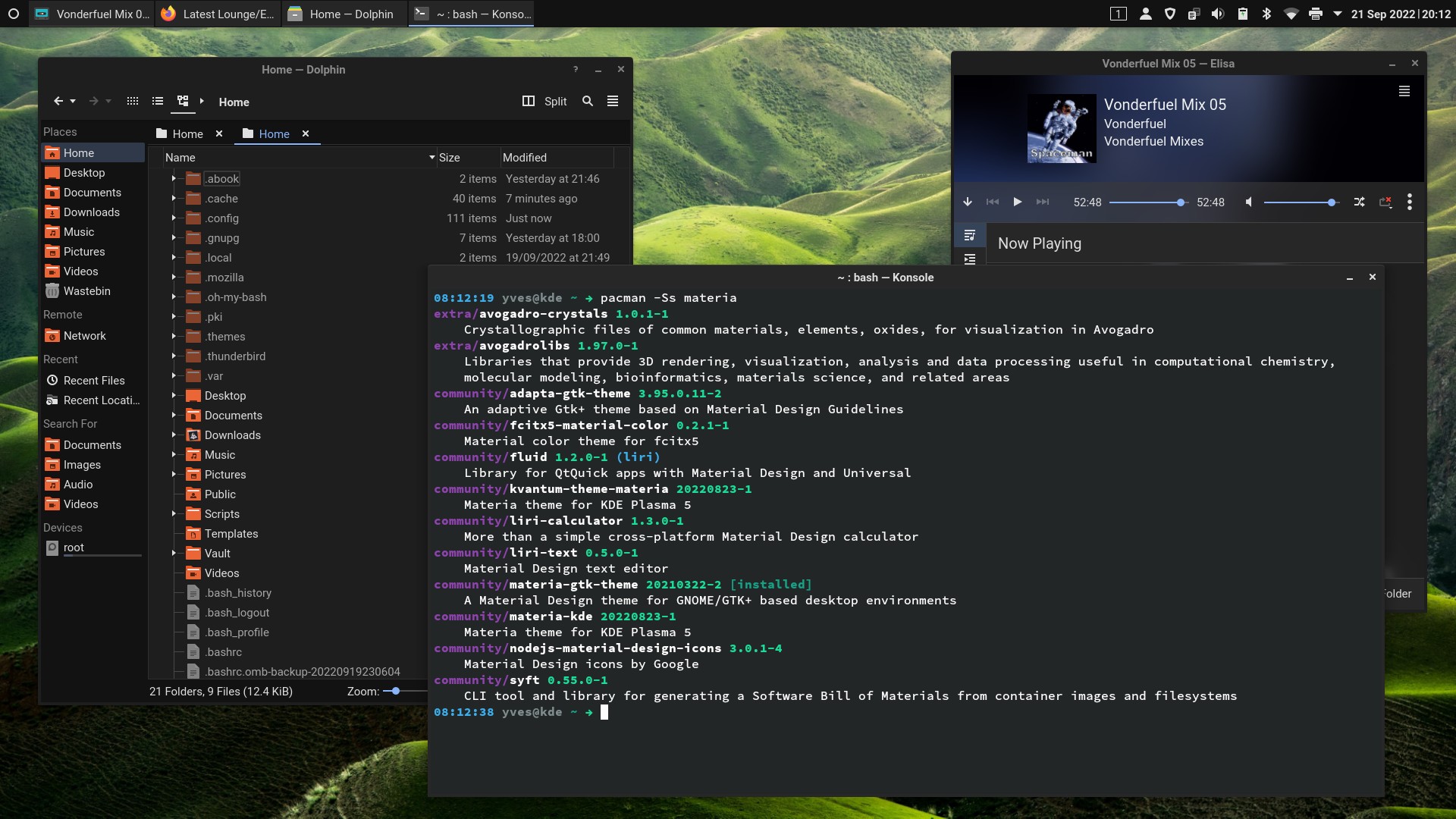 I’ve been dealing with most of the famous DE:s out there and KDE definitely the most sane one. I don’t like everything on it like for example Akonadi but that is not problem on EndeavourOS since it ships only KDE desktop and nothing more and same goes to Arch if you install just plasma-meta or plasma group.

There are indeed some annoyances. As you mentioned Akonadi, I currently can’t add contacts, not through CardDav nor Google. Which is a bug in Akonadi it seems. Gnome has better integration what that is concerned. I still don’t like many of the KDE apps either, but I do like Kalendar and Elisa, and Mailspring has been a good alternative for email. Fits in very well with my overall look, with the right theme applied.

KDE just feels more robust and polished overall once you set it up to your liking, and you get used to the settings overload. GTK apps integrate much better than the other way around with QT in Gnome.

(Body seems unclear, is it a complete sentence?) 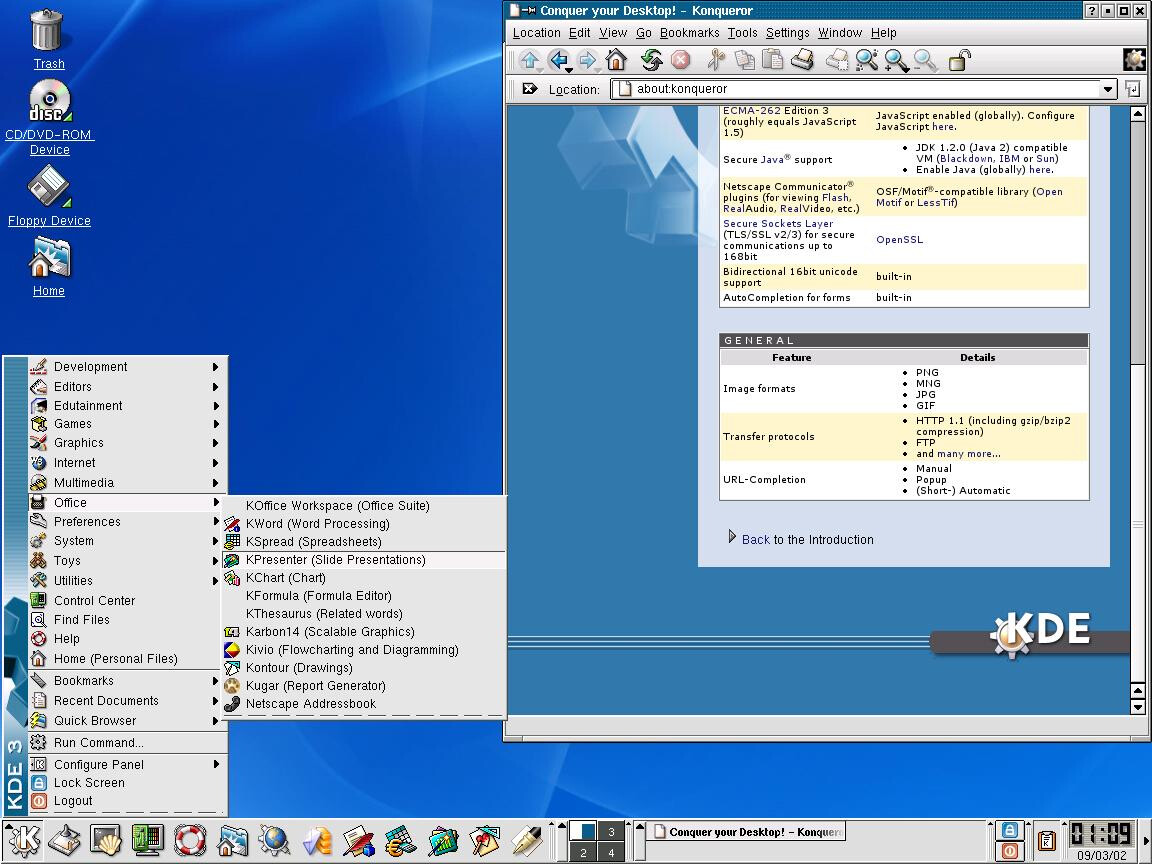 They all looked dodgy 15 years ago

After jumping around a bunch between DEs I have been pretty settled on plasma for a while now. That being said, I don’t use much of the KDE applications. I am happy with the basics, dolphin, konsole and kate are all excellent applications. konsole, especially is very good. But I have been living akonadi-free for some time now.

They all looked dodgy 15 years ago

15 years ago? Here is what trinity looks like today: 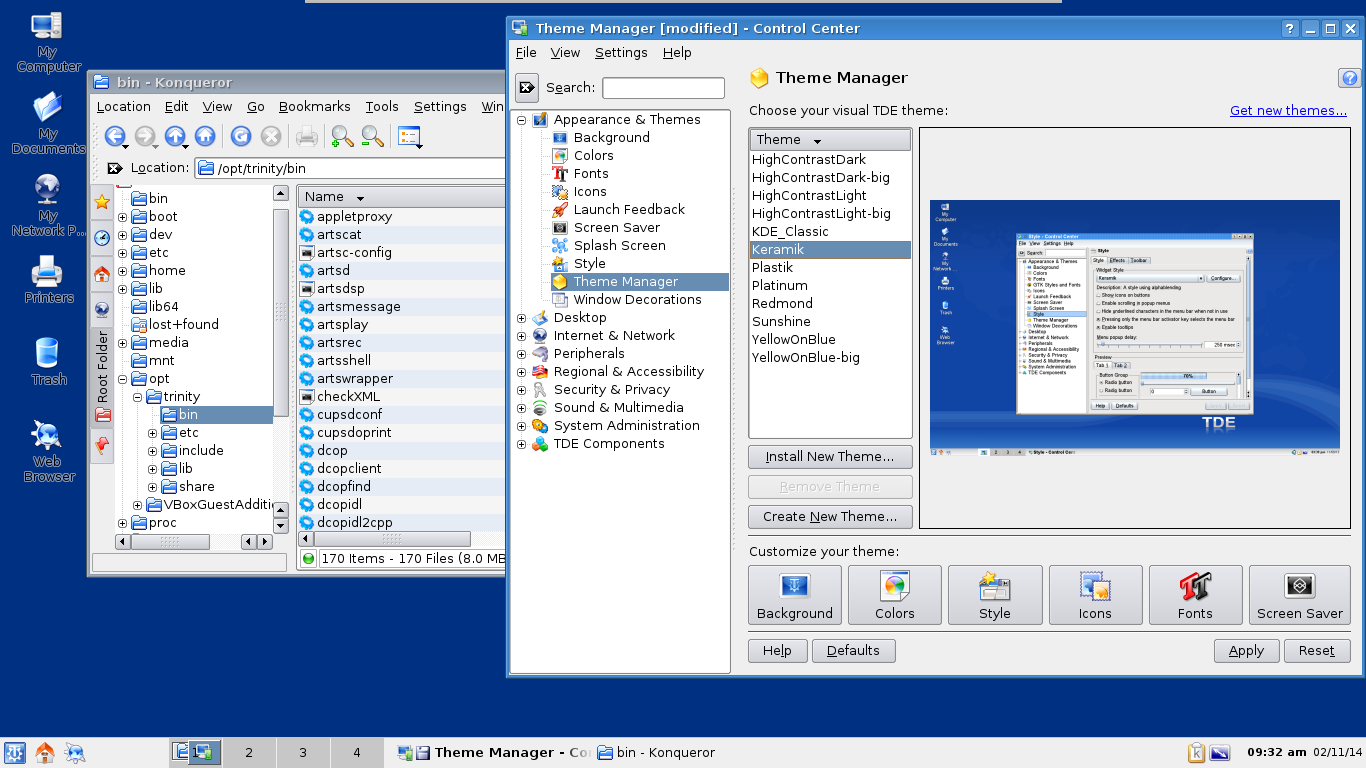 I have used Trinity until this year. The KDE4 disaster was unbearable. In the meantime KDE is usable again.

I also wanted to try it out. But I was deterred by the fact that VLC is installed as a by-catch without being asked.

Still not a fan of Elisa. I’m switching to it slowly, simply because it’s been so long since Clementine was developed. But…Clementine is faster to build it’s database. It’s faster to read the database when starting. It fetches album covers. You can modify the playlist to remove a few songs you don’t want. It’s just so much better of an application than Elisa in almost every way I feel.
But I do love Plasma overall, and I’m still a fan of Trinity.

And dolphin and Konsole are indeed very good apps

Music players are such a personal preference. I don’t like Elisa much. But I also don’t like clementine/strawberry so…

I like Elisa for it simplicity and clean look. I’m one of those people who prefers Rhythmbox on Gnome. I just want it to play music and look good. Clementine fails on one count there for me

Well, I’m already using Strawberry because of qt at the moment, in the past for many years DeaDBeeF, but that somehow seems like a foreign body because of GTK on Plasma. Also, only in AUR, which I want to avoid. Sorry 4 offtopic

You have indeed seen the light @ElGuapo

on akonadi - Thunderbird meets my needs.

One newer KDE app I’m enjoying is Kasts for podcasts.

Well, I’m already using Strawberry because of qt at the moment, in the past for many years DeaDBeeF, but that somehow seems like a foreign body because of GTK on Plasma. Also, only in AUR, which I want to avoid. Sorry 4 offtopic

Not off-topic at all. Good shout on the AUR as well. I’ve learned to be smart on that front in the last few years, and only use it for the absolutely must-be’s

What do you think if someone tells you, they’ve seen the light? …

What do you think if someone tells you, they’ve seen the light? …

Dolphin is also very nice, but I wouldn’t miss it too much if I didn’t have it.

Konsole and Kate are the two programs I use the most.

For me its mostly konsole. For text editor, I use neovim in konsole