KDE or XFCE for me?

takes ages to start on my old PC with similar specs as yours.

Not in my case.

I also know people who use KDE as their daily drives on systems even lower spec than mine.

.
.
It is much better in comparison w.r.t. my device specification.

This is probably an SSD, right?

I said with regards to HDD.

Actually, I feel it depends on matter of taste. Even if there are some issues with any DE according to us, then also we will back them if we like the experience.

And is it safe to install KDE alongside to xfce?
And is KDE actually LIGHTWEIGHT?

For my part, I use Xfce and KDE in parallel. I wouldn’t say KDE is lighter than Xfce.

There are (at least) 3 metrics to consider here:

That being said, they are very different so which one you prefer should also be factored.

I agree with all of this. Especially on the Pi, KDE experience is not as good because it is running on a uSD card.

And is it safe to install KDE alongside to xfce?

Yes, that is safe. I have gnome, kde and xfce installed in parallel. The only issue I am facing is that when I switch between the desktops the default applications are not following. If I have eog as the default app for pictures in gnome and I switch to xfce, then xfce also uses eog as default image viewer. But other than that the parallel installation of the DE’s works fine.

Before in another os i installed plasma but,gtk apps had their native adwaita theme and i tried to fix that but it failed.

Plasma is actually really good at handling this. There is a separate setting for a gtk theme. If you set it to a matching theme, it is fairly seemless.

The p mentioned by @flyingcakes suggests the statistical interpretation.
.
In my case P(E) suggests probability of the event; which according to him roams around either SSD or HDD, but his belief is for SSD. If I consider both situation independent of each other, since I think I can place the boot loader in any one of them at a time, then probability of happening of each event should be 1.

Guys I finally installed kde parallel to xfce.
But when ever I login into kde it ask me to enter to enter password to mount some partition(before getting into the desktop).the heading of the prompt is like policykit kde daemon…
What is this?
pls help

And also whenever I open brave browser the given prompt shows.and also my account gets logged out in brave everytime.and i when I login to kde it shows the loading screen and then nothing happens for getting kde desktop to see I need to open tty and close it.please help 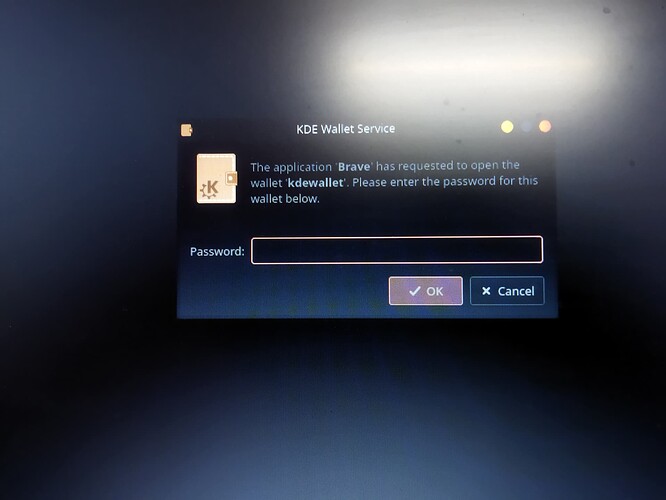 That prompt usually either means that your kde wallet password is different from your user password or you are missing the package kwallet-pam.

I might add that installing multiple DEs will usually lead to some degree of frustrations. It isn’t an “easy button” type of operation.

Why install them together when you can just create a separate partition for another install!

I ran 3 DEs + 2 WMs for months without an issue. I even was able to remove some DEs and install others on the fly. Just delete the user for that DE later and added a new user for the new DE

The only problem with this approach is you have to be very rigorous with it. Accidentally log into the wrong desktop and that user is broken.

You also need to find a way to manage shared files. One way is to have all the users share the same UID but that will require you to create the users with a tool that lets you set the UID.

In the end, it is all doable but it still isn’t a “just works” type of scenario.

I forgot to say that I removed xfce after installing kde

The only problem with this approach is you have to be very rigorous with it. Accidentally log into the wrong desktop and that user is broken.

I agree with this, I was very rigorous doing it.
I also had a common home folder that had all the download files, documents, pictures etc and had to symlink those folders every time I created a new user.
There were also some permission issues for some files/folder and I had to run scripts to change permissions.

In the end, it is all doable but it still isn’t a “just works” type of scenario.

Yup definitely isn’t just works and I had to learn a lot to set it up and manage it. This was my alternative to distrohopping.