and maybe start a topic in the Plasma section which could be a place for others to contribute and build enough info for a wiki entry.

exactly what i was thinking ! tag me there if you do that please.

Oh, and welcome to

Oh, and welcome to

indeed welcome @ttv20 also you are already catched by the endeavour

could you post a screenshot? (may me not understand this because not used to plasma

It does for me. 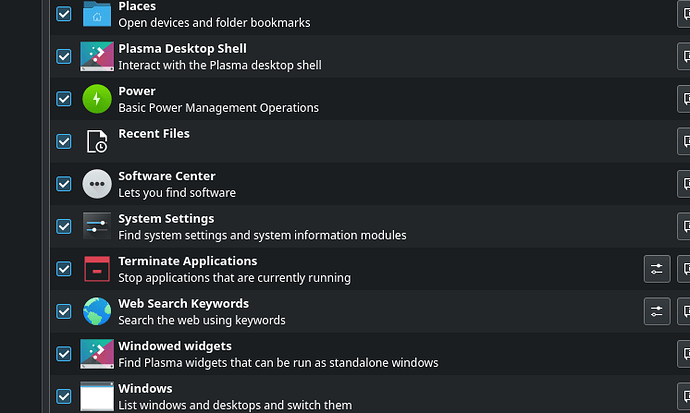 Without it installed it doesn’t show up in the list of available plugins.

Once it is installed, it shows up.

You are right, my mistake.
So now the only thing that is bugs me is that Plasma doesn’t show any induction for the lack of this function. When you click “Get New Plugin” the unit conversion is not there (probably because it’s a core function)
I’ll try to ask on the bug report on KDE bugs system.
I still think its should be included, because the normal user that search for it will not find it. I even tried to install kunitconversion but it didn’t work

I’m not understanding this because i don’t have kdeplasma-addons installed but i do have krunner. I have no issue that I’m aware of.

Edit: Yes i see it doesn’t show up in the menu.

Edit2: I guess you can’t miss what you don’t know is missing.

plasma’s default offering very satisfactory. If I need something, I can install it.

I use Plasma 99% of the time, and I don’t have kdeplasma-addons installed. It’s certainly not a necessary package.

I think it’s better not to have it installed by default. It comes down to distro philosophy, but personally, in cases like this I think it’s better to err on the side of less bloat, because KDE Plasma works perfectly fine without it – there is nothing broken if this package is missing.

The user can easily install kdeplasma-addons if he needs it. The only potential issue I see here is that the user might not know that this package even exists or what it does (the package description is very minimal). It also doesn’t help that the Arch Wiki entry for KDE does not mention what exactly this package contains.

So I think it would be better to improve the wiki page, rather than to force all Plasma users to bloat up their systems (even more

i think one part here is that most distributions do ship plasma in full “bloat” mode installing everything possible needed… same as for GNOME, but following the main goal of the endeavor we do start, we work hard on setting up a functional minimal setup for all Desktop installs to start with in most cases this setup is everything a user may need on a daily usage, in other cases it may is to install everything to full load all little things a Desktop can offer.
And there is may a user installing the office application used to use… an email programm e.t.c that’s the
idea…

So having some wiki about how other packages can bring in such features you may need is what we need in our endeavour to stay minimal.

So having some wiki about how other packages can bring in such features you may need is what we need in our endeavour to stay minimal.

I’ll post a topic as a starting point for this later today.

As suggested here https://forum.endeavouros.com/t/kde-not-install-dependency-kdeplasma-addons/27972 and by @joekamprad this topic is intended to scope and draft a Wiki entry that covers KDE issues specific to EndeavourOS (i.e. not to replicate information in the Arch wiki or elsewhere). I’ve searched the forum and subreddit for common KDE issues and suggestions people have made. The absence of kdeplasma-addons in the default KDE Plasma install has been mentioned a number of times https://forum…

Not being a KDE type myself - I find I only know of one thing that kdeplasma-addons brings. Is there mention of what else it can do for the user who might want it?

I tend to think of the need as being for something under a heading: What you may want to do after installing KDE - and including a minimal guide to addons and places to look for theming (which is ONE of the reasons I don’t KDE!

Happy to insert whatever results into the wiki when its ready…

I use KDE and i don’t even know half the stuff that could be installed. I don’t miss it because I’m not aware of it and i don’t compare other distro’s to EndeavourOS because they are all bloat as @keybreak say’s.

Edit: The fact is i don’t need to use everything KDE such as Kmail or Kongueror etc. I use other packages such as Firefox and Thunderbird for email etc. I just need a base install of Kde Plasma and then pick and choose other packages.

I have never done Conky! I am also too lazy!

I recently got into it. Just copied a good config and modified it a bit. It isn’t that hard

Is there mention of what else it can do for the user who might want it?

There are other guides for this elsewhere on the internet - they could be linked at the end of the Wiki entry.