Issues with installing AttractMode from the AUR

It’s a long story, and I am back on EndevourOS again.

I’ll keep the story short. I know how to transfer files from one system to another and all that stuff. I’m a NewB when it comes to fixing installation problems that have errors.

FIrst issue and it seems to NOT matter what distro I am using, I played around with ArcoLinux for a while and still get the same issue regardless of whatever I did.

I am assuming first and foremost that the issue has to do with updated libraries and or files.

I am trying to install the latest AttractMode, Something has changed. And I keep getting this build issue with it that says something like towards the end this

My first thought was ffmpeg, needs to be older or some flash thing. But the problem is right now I am on a new install of EndeavourOS and not really sure how to continue.

What I am doing is changing over from ArcoLinux to Endeavour, Because Arcolinux seems to be so buggy and Endeavour does not seem to be that way.

I also have a problem simular with trying to install Bomi and a couple more. I’m thinking there has been a package update, but I don’t know how to downgrade since I am on a fresh install.

Anyway, I really need to get attractmode and bomi installed for my uses but can’t seem to do so.

Sorry, I have another build issues with Audacium. I have tried every single fix mentioned on the internet after searching, and I also recently decided to stop using Pamac because it seems to fail after a while, but I believe that issue has to do with using bleachbit to clean my PC. So now I switched to “Bauh” which I recently found out about and I think it’s better in my opinion.

Anyway, anyone know how to fix this? Any help would be greatly appreciated and I can post more logs on the issues?

THank you for you time.

I think maybe you just need more knowledge on package build when trying to install a package from the AUR. It may be that you don’t understand what to do each time a question is asked in the build process. I’m not an expert in this matter but I rarely have any issues. Then again i don’'t normally install some of these packages you are referring to.

I don’t see this package AttractMode?

Edit: Is it just attract?

The thing is I have done this probably 100 times easily with no issues, and sorry I should have said the package name is called “attract”, it’s a game frontend.

Okay i see attract. Are you using attract or attract-git version?

won’t compile now ffmpeg5 is out, must depend on ffmpeg4.4
https://aur.archlinux.org/packages/attract#comment-852625

I’ve tried both versions. It would install fine a couple weeks ago. Now I get that error regardless using any arch distro or plain vanilla arch or trying to install with pamac or bauh or using pacman. So I keep thinking a library file has been updated and the build is pointing to an earlier version although I am not sure how to change all that stuff. I could install pamac-all and go into the build files and change the number version for ffmpeg, but I tried that. But right now I am on a fresh install of EndeavourOS and decided to go with “Bauh” which I recently found out about, I like it much bettter.

Anyway regardless of trying to install it with anything I still get that build error. I’ts probably because I think the AUR package hasn’t been maintained since 2018, so I am just wondering how I can downgrade or install the packages I need to make it work.
Anyway, thank you for your time. This is a maintainer issue which I guess happens to be the developer also, so I guess I just need to figure out how to downgrade a few packages to install it? I really don 't know.

I am trying to install the latest AttractMode,

What specific package are you trying to install?

This package is abandoned and hasn’t been updated in over 2 years, which may explain why it won’t build.

Fred has picked it up.

Have you tried the git version?

Have you checked upstream too?

Wish i could be of some help but i really don’t know what the issue is with it.

This is the install instructions for Linux:

Someone more experienced might be able to walk you through it. Good luck! 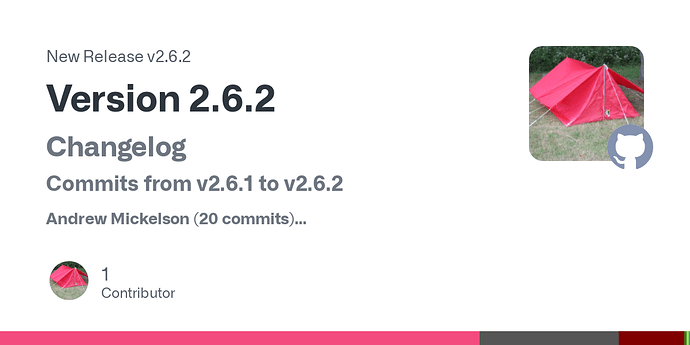 @Bobcat
Maybe try this one as it is easier to follow. Not sure it works either.

A graphical front-end for command line emulators that hides the underlying operating system and is intended to be controlled with a joystick or gamepad. - Compiling on Arch Linux · mickelson/attrac...

Edit: Thanks to @pebcak

Unfortunately it doesn’t work either.

I am trying to install the latest AttractMode,

Generally most computer geeks that use Linux are more suited to a career in radio rather than TV. IMO installing AttractMode on your Linux box is not likely to instantly turn you into a regular Casanova with the ladies. Perhaps spending more time at the gym would be a more worthwhile investment of your time.

OK people, I admit that was completely off topic, but only a joke.

My apologies, but I couldn’t resist.

Tried the git-version with yay from AUR and looks like it´s working. 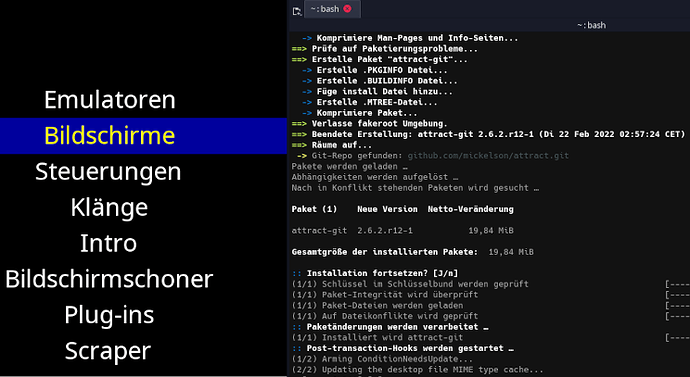 My system is fully updated. ffmpeg 4.4.1 and ffmpeg 5.0 both installed.

It wasn’t working for me. I tried both. What version is ffmpeg? I read somewhere it needed ffmpeg 4.2
I didn’t want to downgrade as there are other things that need to be downgraded at the same time.

I think it is working now. I’m installing it. It didn’t before so somebody has fixed it.

Hopefully @Bobcat is around as it is working now as you say.

He can’t see this if he’s too busy playing