Install did not like to split directories over multiple drives.
I usually have separate partitions for boot, home and var on different drives but the install program would not do this.

Did you try using manual partitioning?

Then you can switch back and forth between the devices here and set mount points: 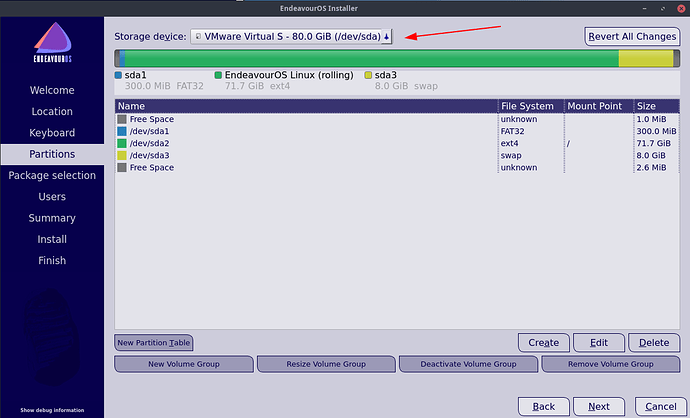 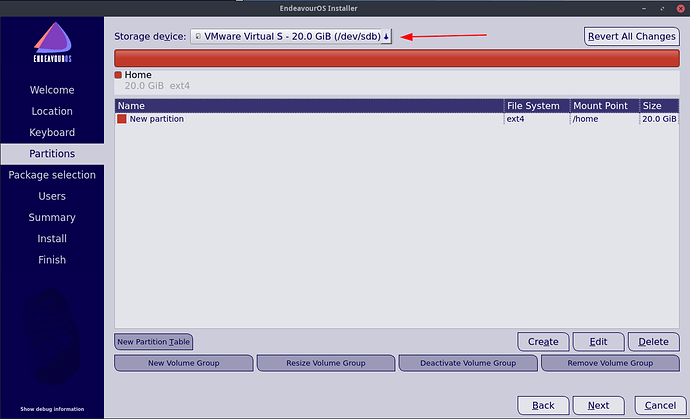 Strange, I split my install over two drives too without any problem…
My home folder and bootloader are on a sata ssd, while my root is on a pcie nvme drive

I think some people don’t realize they need to select the drives from the drop down window that say’s Storage Device! They just assume that under manual partitioning the drives will automatically be listed and or they become confused with partitions?

think some people don’t realize they need to select the drives from the drop down window that say’s Storage Device!

No wonder, i actually think it’s not best decision in terms of UI

I think it’s part of the Calamares installer. I have gotten used to it so it becomes second nature.

Yes it is how Calamares roll (and once you know it’s fine), what i meant is that Dropdown is not most intuitive UI for this task…

For example i think if it would be just:

It would speak for itself

I’m not so sure? I would have to see it laid out that way. My point is that i just think some people miss the small details when it’s unfamiliar. Once you know and or get used to the lay out and the process it becomes habit.

@pwhi
Welcome to EndeavourOS
Don’t be afraid to ask for assistance.

Perhaps a look at Ubiquity installer (Ubuntus, for the most part). They present all drives in one shot - but it is understandable, if somewhat fraught.

Thanks for the feedback to all.
Firstly, yes I did manual partitioning, as far a selecting drives and allocating directories.
BUT upon reflection I may have overlooked that one of the drives was new without any formatting.
Having said that all was fixed by setting up partitions manually with fdisk and remounting them in fstab
after install.