Installed zsh to try out.. but it is not configured .. hence felt worst than bash shell

When i saw the command prompt is like this:
"enos-andrew-pc% "
I got headache.
Where to start making zsh at least as good if not better than bash shell ?
I browsed thru this page at

Boring stuff…
This is good enough for me to start with zsh ?
or any better url with essential stuff that make it better. ?

That’s why I suggested you stick to Bash, until you get more comfortable with it. Configuring Zsh is fun, but it’s not the simplest of task.

You need a .zshrc file. A good place to start is to look up what other people have posted online.

I recommend starting by reading the guide. It is very well written, especially for new users. Unfortunately, it is a bit outdated, since it was written for version 4.0, and the current version running on Arch-based distros is 5.8. But most of it should still be relevant.

Customising zsh is a rabbit hole. There is almost no limit to how crazy you can get with it, and you’ll discover new things about it for the rest of your life. For example:

Problem If one uses Bash as one’s shell, and wants to, for example, download a Youtube video using youtube-dl, a command like this will be sufficient: youtube-dl https://www.youtube.com/watch?v=C1Ua4UFsmzE However, if one uses ZSH, the question mark character in the URL may be a problem, because of ZSH’s extended globbing. In this case, one normally has to put quotation marks around URLs like this: youtube-dl "https://www.youtube.com/watch?v=C1Ua4UFsmzE" or escape special characters, like th…

have a look here:

Chris Titus Tech was started as a resource for all things technology. It has evolved from a YouTube channel to now be a resource for anyone wanted to learn about a variety of tech.

Oh My Zsh is also usefull for adding plugins and themes etc.

Oh My Zsh - a delightful & open source framework for Zsh

Oh-My-Zsh is a delightful, open source, community-driven framework for managing your ZSH configuration. It comes bundled with several helpful functions, helpers, plugins, themes, and a few things that make you shout... OH MY ZSH!

Again, I would strongly recommend against using oh-my-zsh. It’s extremely bloated, it slows down your terminal, it’s buggy, and it’s unnecessary… In my opinion, it’s absolute rubbish. Even worse, it makes it more difficult to learn how to use ZSH efficiently. Therefore, I would recommend learning to customise ZSH yourself.

fair enough…
haven’t had any problems with it myself, but then again I’m not a terminal power user

That’s one of the reasons I stayed with bash.

oh-my-zsh is not a part of ZSH, it’s a completely separate project. So the fact that oh-my-zsh sucks should not deter you from using ZSH, which is an excellent shell.

There is absolutely no need to use oh-my-zsh. It is, in fact, nothing special, it’s just a bunch of scripts. It does not add new features to ZSH or extend it in any way, it just customises it in a particular way.

I’d jump in and take the chance of @andrew_ysk thread to ask you something @Kresimir
while I agree with you about the omz framework, and I think plugins, as much as appetizing, should come after having setup what zsh natively offers, are you aware of any commented baseline and suggested fundamental plugins (à la Tim Pope’s vim-sensible, for example) that might ease the newbies approach to the shell?
thanks!

I use zim for its loading speed, with powerlevel10k theme. And yes you may need to edit those rc files to get zsh going.

Setup details are in my notes. 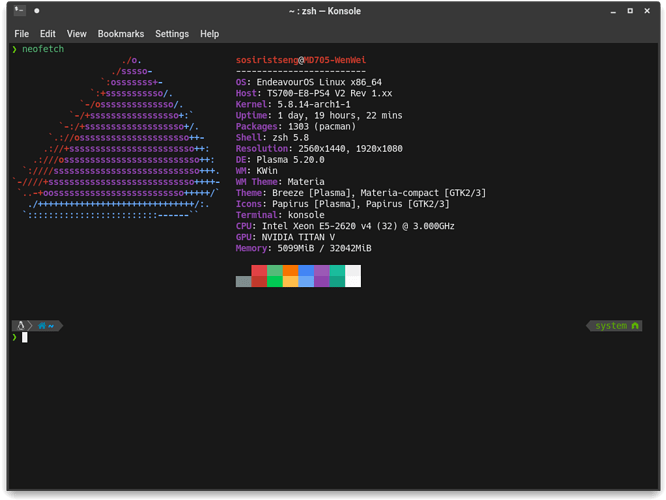 There is a lot info and reading to do. .
But i just want to jump in and ask a question that has nothing to do with zsh.
I just updated my system last night in order to install zsh.
How come now by time out screen lock back ground picture totally changed ? I have no problem with the new pic, but I NEVER change the pic, and it auto change for me ? That’s is a bit like unauthorized messing on other ppl pc ? ** just asking, as i stressed no problem with it.**

I agree with you about the omz framework, and I think plugins, as much as appetizing, should come after having setup what zsh natively offers, are you aware of any commented baseline and suggested fundamental plugins (à la Tim Pope’s vim-sensible, for example) that might ease the newbies approach to the shell?

Once you get comfortable with customising ZSH yoursefl, you’ll realise even more how bad oh-my-zsh is, so you won’t even be tempted to use it. Regarding plugins, zsh comes with a bunch of them by default, and I only use a couple of additional ones: zsh-autosuggestions, zsh-completions, zsh-history-substring-search, and zsh-syntax-highlighting are the only packages containing the “zsh” string, installed on my computers, apart from the zsh package.

What do I recommend for newbies? The official guide I linked above, written by the main developer of ZSH. And for customising it, look up some shared dotfiles online to get ideas, and dig in to the manual to understand it. It’s more of an art than a science

How come now by time out screen lock back ground picture totally changed ? I have no problem with the new pic, but I NEVER change the pic, and it auto change for me ? That’s is a bit like unauthorized messing on other ppl pc ? ** just asking, as i stressed no problem with it.**

No idea. My guess is that you must have somehow changed it without being aware, as the update should not touch your user space. When I updated, nothing changed to the lock screen.

Thanks for the good guide for beginner (those also the one that i need, no fancy stuff for me)… may i know to get the basic of it (those u have written above read thru and learnt) how long roughly will it takes ? just want to have a heart preparation.

No idea. My guess is that you must have somehow changed it without being aware, as the update should not touch your user space. When I updated, nothing changed to the lock screen.

Well, it did change. I have touch nothing apart from update system

how long roughly will it takes ?

Probably more than your entire life…

Think of it as a voyage, not as reaching some destination. ZSH is huge and I doubt there is a single person on Earth who knows everything about it. Have fun experimenting and tinkering with it. It’s a good idea to look up other people’s dotfiles and see what they’ve done.

no, i mean the basic of what you showed above… i have to get started asap, i can’t wait till whole life before i start using it.

You can start using it right away, even with its default settings it is fully functional, though somewhat rudimentary.

Did you complete the zsh-newuser-install function? That should have generated the initial .zshrc file, which you can tweak.

I recommend adding at least some keybindings to it, something like:

If youre not comfortable or familiar with bash why even bother with Zsh? Learn the basics first

that said im a fan of plain bash with a transparent terminal. I get wanting to customize but the simpler the better imo

ZSH is really nice if you enjoy tinkering, and when you configure it to your liking, it makes you more productive, especially if you live in the terminal.

But I agree, being comfortable in Bash should be the prerequisite for getting into ZSH. Even Bash is not entirely simple and trivial to learn, and ZSH is much more complex. If nothing else, not using Bash will make you not appreciate the differences between ZSH and Bash. Also, you won’t have ZSH on every computer you encounter, while Bash is nowadays pretty universal.

It took me about 2 hours to get it working as I liked. My first attempt was identical to yours: I installed zsh and was expecting some really pretty shell just to be presented with a plain and really poor graphical experience. My scope was to improve legibility of the terminal by highlighting the prompt and differentiating it more against the commands I enter.

For my second attempt I gave it a bit more effort and was rewarded with a great experience. Not to mention all the goodies zsh comes with, like syntax coloring, improved history and auto-complete, which greatly improve my productivity. I had to update my .aliases file to adapt the scripts to zsh, as it works a bit different than bash.

Here’s how it looks now.

There is a good tutorial on YouTube at EF Tech Made Simple. In essence, you will need a .zshrc file, just like with bash. However, My guess is that most of us use Oh-My-ZSH which sets ZSH up very nicely with lots of help. The tutorial I mentioned also shows you how to set up the plugins for ‘Oh-my-zsh’.

FYI there is another good tutorial by Brodie Robertson on YouTube, but he dislikes ‘oh-my-zsh’ and shows another way to add your own plugins.

You will have to do quite a bit of reading.