Just guessing, but in the AUR there is r8125-dkms package, maybe that could help (instead of the r8169 kernel module)?

Unblacklist that you mean? As currently I have no DNS resolution, so no connection. I might try and swap the Ethernet cable to the intel card, see if that makes a difference. If that works then I can look at possibly downloading the AUR package you mentioned. But this doesn’t make sense as I had a connection prior to reinstall and during re-install unless maybe a package update should have been done before re-install…

TL;DR
Could you explain exactly

Thanks for coming back to me. So I downloaded Iso recently and add it to a USB stick which has Ventoy configured on it.

Use the command nmtui(The terminal front-end for network manager) to take a look at your network settings and see what it missing. Enabling network manager may not be enough to get you a fully functional network connection.

Following a further reboot now I have to press CTRL+ALT+F2 in order to login on tty2 as tty1 seems to just remain at checking files and blocks with flashing cursor below that.

Entered the wireless password and when trying to ping www.bbc.co.uk I am getting:

For the network, what does ip a show? Are you getting an IP address? 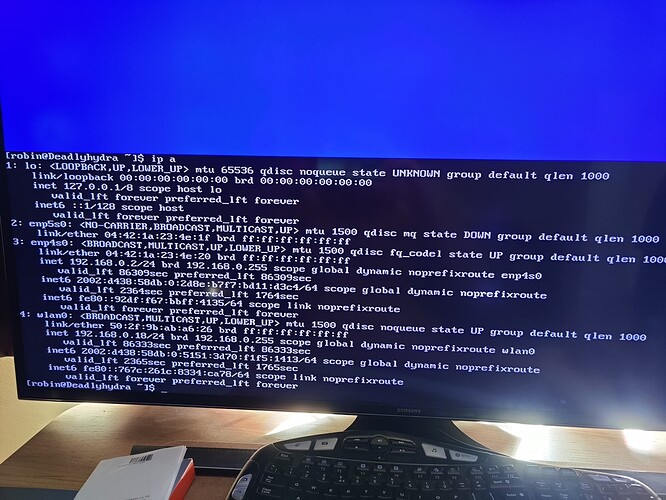 So it seems that the wifi is connected

It looks the wifi is connected but so is enp4so. Are you connecting your wireless and your wired adapters to the same network?

What does ip route and cat /etc/resolv.conf show? 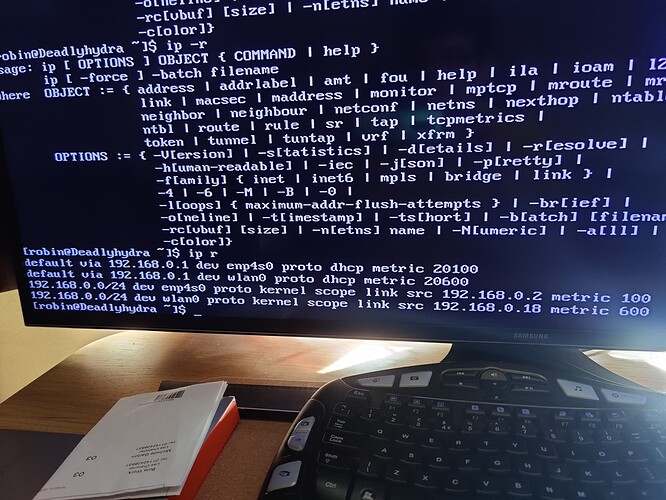 What about the other command?

No such file or directory…

Go into nmtui, and look at the DNS settings for your wired connection on enp4so

IPv4 settings are on automatic but should this not resolve automatically the dns servers? I can add them manually and see what happens. But this is what I see currently 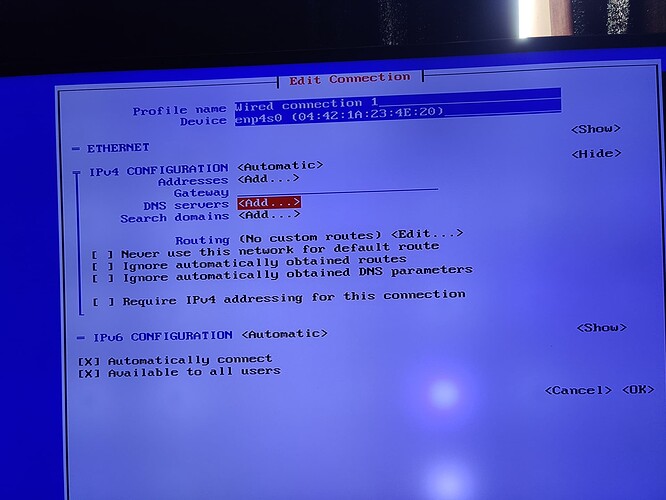 The ipcomfig cmd though seems to show the dns server which should be the router as one of them. Will try entering the google dns servers IP addresses.

Same issue even by entering google dns servers. Does a daemon or service need to be restarted at all for these changes to take effect? Booting back in to windows i don’t have an issue in connecting to the net…

Does a daemon or service need to be restarted at all for these changes to take effect?

It is strange that NetworkManager isn’t writing an /etc/resolv.conf

I would use nmtui to disable your wireless connection.

The ipcomfig cmd though seems to show the dns server which should be the router as one of them.

What does this mean?

Sorry, ipconfig is a windows cmd line tool like ip. Must have been predictive text

Also prior to accessing nmtui the wireless was not configured with the wireless password, therefore the only connection that was present was the ethernet one and still having the same issue but will try.

Just a thought… could it be a hosts issue?