I’ve used Deepin two years ago as my daily driver but abandoned it since there were some inconsistencies that irritated me at the time.
Now I’m playing with it on my second HDD, I have to say it has improved a lot!!! It is not only a pretty face but their in-house apps are working great.

I don’t know if the collaboration with Huawei has something to do with it, but it has matured. I’m really considering turning my daily driver into Deepin as my DE.

@Bryanpwo Are you into screencasts? I’d be interested in seeing you give a brief tour.

I will, once I’m done playing

Talking about screencasts, it has a beautiful working screen recorder that’s fully integrated.

Are you referring to just the Deepin DE or the entire Deepin Distro? I presume the DE.

I am using Deepin DE on my old Antergos install and I agree it is pretty nice.

Of course the DE, I wouldn’t do that to you guys, not practising what I preach…

hello look at the window theme a little bug 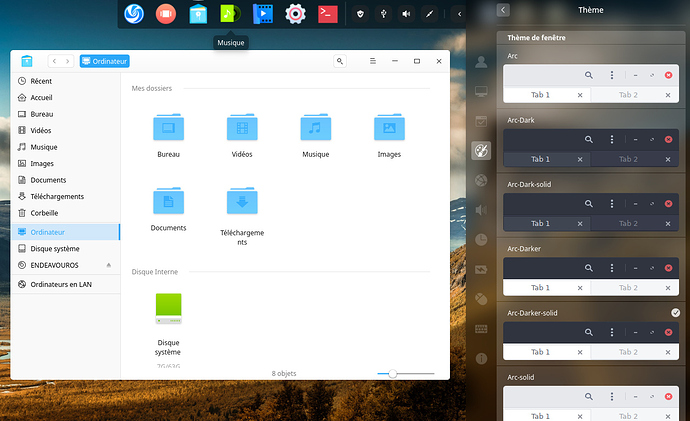 I noticed that too, but the filemanagers window can’t be themed, that has always been the case. I think it’s their philosophy to stay within the Deepin themes.

So no matter what non-default theme one uses, the file manager will always look different?

You can only choose light or dark for the filemanager, the rest of the windows will take the theme you chose.

Thank you for the beautiful wallpaper, I installed it. It makes me so happy somehow.

I wasn’t that far in my exploration, does it hapen all the time?

Not my wall paper just one off the net that I modified and added the logos that are provided on this forum. Yes the errors are there all the time.

Yes the errors are there all the time.

It’s not all deepins fault lol. I am not at a machine right now to explain further. They are usually harmless errors. One neat thing I learned just the other day. If you right click the deepin terminal icon there is a menu item called quake terminal which is a lot like yakuake.

Just making sure you aren’t going over to the Dark Side and away from Endeavour/Arch.

Endeavor has deepin as one of its de’s on the net installer.

Okay you got me, it is my mission to turn Endeavour into an Ubuntu flavour, gradually…